Jean-Michel Pilc: What Is This Thing Called? 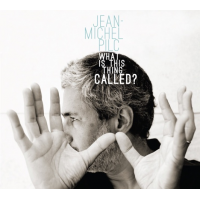 Jean-Michel Pilc's solo piano recording What Is This Thing Called? might have been titled "Thirty-one Conversations About One Thing." That 'one thing' being his 31 variations on Cole Porter's composition "What Is This Thing Called Love." Why record 31 versions of one song? Maybe ask yourself why Claude Monet created so many paintings of the same haystacks.

Pilc, the Paris born, New York based pianist heads up an octet, a few trios, including one with Victor Lewis & Ira Coleman and performs in duo with Sylvain Luc and Kenny Werner. This is his third solo project after Follow Me (Motema, 2011) and Follow Me (Dreyfus, 2004).

Composed in 1929 for the musical Wake Up And Dream, "What Is This Thing Called Love?" has been recorded and quoted in performance by thousands of artists from James P. Johnson to Clifford Brown, Miles Davis, Ella Fitzgerald and Frank Sinatra. It is one of those instantly recognizable standards.

Pilc's treatments of the composition, like Monet's painting, varies. But unlike the impressionist painter, Pilc is not restricted by technique. He dabbles in abstraction, pointillism, figurative, modern, and post-modern stylings.

The disc's 31 versions begins with his "C Scale Warm Up" with a nod to James P. Johnson and bit of stride piano and a climb up and down the scale. Next, an affectionate (almost straight) cover of the tune itself before we are off onto pieces as short as 31 seconds, "Chimes" and others, with disguised tributes to modern music. He inserts fragments of Fats Waller's "Jitterbug Waltz," into "Cole" and "Duet," which has a whistling accompaniment. "Giant" finds the mashup of the theme with John Coltrane's "Giant Steps." Elsewhere there are dedications to Ellington—"Duke," Martial Solal, and Kenny Werner -"Grace." He touches on a wide emotional range with the plaintive "Dawn," the locomotive blues "Walk," the Gospel-feel of "Look," and the hypnotic embrace of "Waves." Pilc is not so much a chameleon as he is a colorist. The music maintains its coherent themes throughout.