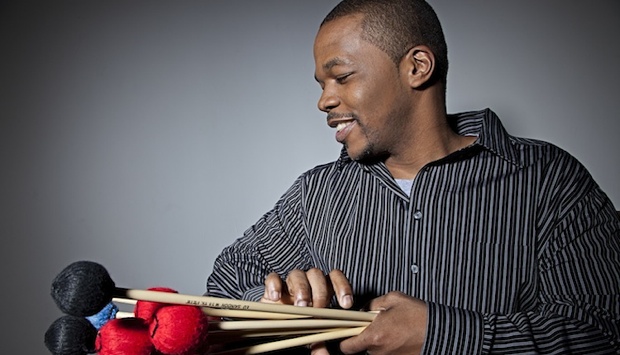 By R.J. DELUKE
December 26, 2011
Sign in to view read count
Warren Wolf has made his name by playing the vibes, which he does with aplomb. He's as much a virtuoso on the instrument as anyone, even including his jazz elders. That may be, in part, because he was influenced by the sound of Milt Jackson and studied with one of the best in Dave Samuels, while his attack is more influenced by horn players like Charlie Parker.

His technique is immense. None other than the great bassist Christian McBride has said that he's excited beyond belief about Wolf, avowing, "His talent is so far off the radar screen. ... Everything you want in a musician: he has that, times 20." McBride met Wolf in 2000 and pledged that one day he would have a band that would include Wolf. That plan became a reality, and Wolf has been a regular member of McBride's band Inside Straight since its inception.

Wolf, however, is more than a vibes player. He's good enough that he could make a living as a jazz drummer, if he wanted to. Percussion is so innate with the man that his close friends and family don't even call him by his given name. "Warren," he admits, is more like a business name. His family and friends call him "Chano," a nickname given to him, as a boy, by his father, Warren Wolf Sr. The elder Wolf, though a teacher, was an amateur percussionist and a big fan of Latin rhythms, hence the nickname. Chano Pozo was the first conguero hired by Dizzy Gillespie when the legendary trumpeter began incorporating Latin rhythms into his music in the 1940s.

Wolf is also a fine pianist and has done jazz gigs on the ivories. He has that outstanding feel for harmony and melody. "Playing the vibes is something different. There's nothing that really attracted me. If I played trombone or saxophone, that attracts me, too. I think the vibraphone kind of sticks out compared to other instruments. You don't see it all the time. When you do see it, you're seeing these colorful mallets—depending on what color you decide to get—striking metal. It's pretty cool—like a drum, but it makes different tones," explains Wolf. "Vibes is my main axe, I would say, because of how people have labeled me. If I had to give my own label, I would say it's a mix between vibes and drums. I don't consider piano a main axe. It's definitely a mix, in my opinion. But I'm not going to argue with people.

"I do gigs on all three. I'll do vibes, piano, drum gigs. I do all of them. There have been some times when it's called for. On certain gigs that I do, I'll have an extra drum set on stage. That way we can mix it up instead of giving an entire show on vibes. I'll switch over to the drums and play with the other drummer. Or there are times I have a Fender Rhodes on stage; I'll get on Fender Rhodes or piano. It's about the show. We want to play the music to the fullest, but I'm giving people a show." 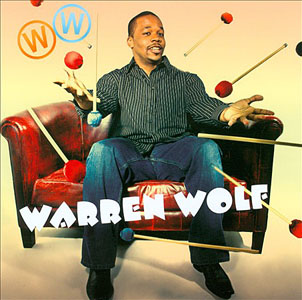 He might not view the vibes as his main thing, but when one listens to his 2011 CD, Warren Wolf (Mack Avenue), it's awfully hard to fathom. His smooth technique is on full display, swinging and swirling. He brings it, even when playing a sweet ballad like "How I Feel at This Given Moment." It's not his first recording, but of his previous four, two are Japanese imports, and two are self-produced. This one, on the Mack Avenue label, gives him his widest potential audience thus far. McBride is the co-producer as well as the bassist. The band is tight, but definitely driven by Wolf and his uplifting energy. He's a vibes wizard, for sure. And the band is first rate, with Gregory Hutchinson on drums, Peter Martin on piano, and appearances by trumpeter Jeremy Pelt and saxophonist Tim Green.

Wolf wrote six of the 10 selections, but not specifically with the recording or band in mind. He did, however, specifically piece together a band, keeping the sound he wanted in mind. The result is a clear, straight jazz feel: a cool vibe throughout. It's played with soul and conviction, and should help spread the word on one of the baddest vibraharp cats around. As a whole, the record accomplished exactly what Wolf wanted.

"We had a lot of fun in the recording," said Wolf from New York City (Baltimore is his home) during a weeklong run with McBride's band at the Village Vanguard. "I wanted to keep it nice and fresh—keep it full of energy, not predictable. I wanted to keep it going as regular, straight-ahead jazz. Stuff you can tap your foot to and things like that. A lot of people nowadays, when they're playing this so-called music, jazz, they're playing a lot of different stuff. It's beautiful music. But in my humble opinion, I don't think it can relate to the normal person who's walking down the street. Jazz as a whole is very complex. I'm trying to make it as simple as possible so people can understand it—have some type of clear line, clear melody that somebody can somewhat remember." 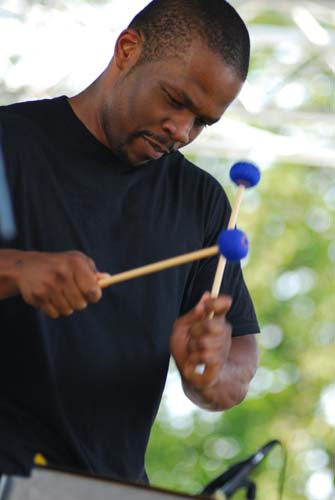 He put musicians together who had a previous relationship with one another, and people he knew would be comfortable. He wanted that to show in the music. "I didn't have anything in mind, tune-wise, for the band. I just knew once I got the band together, everything would come together good," he adds. "It wasn't a long process at all. We finished the record in two days. When I get into the studio, I like to keep going. I'm not hungry. I'm not tired. I'm full of energy. But to give everybody a rest so we could make the tracks sound fresh, we decided to do it in two days. The whole entire record was practically done live."