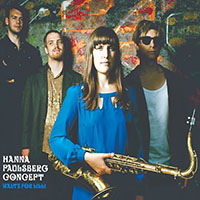 Norway's place on the international jazz map has been assured for decades: first with saxophonist Jan Garbarek, guitarist Terje Rypdal and bassist Arild Andersen; then, a second wave including trumpeters Arve Henriksen and Nils Petter Molvaer, and pianists Bugge Wesseltoft and Christian Wallumrod; and, more recently, in another wave featuring In The Country and Splashgirl. Still, its scene has often seemed distanced from the American tradition that nevertheless resides at the core of many of these players. Enter saxophonist Hanna Paulsberg and Waltz for Lilli, which suggests that it's possible to revere that tradition and, at the same time, forge your own culture-rich identity.

The twenty-something Paulsberg is already an alum of the Trondheim Jazz Orchestra, most recently in collaboration with keyboardist Ståle Storløkken and psychedelic space-rock outfit Motorpsycho at the 2010 Molde Jazz Festival and the resulting The Death Defying Unicorn (Rune Grammofon, 2012). Despite Paulsen finding herself in a multiplicity of contexts, her allegiance to the jazz tradition is abundantly clear with Hanna Paulsberg Concept (HPC), also featuring three other recognition-worthy young Scandinavians. Waltz for Lilli is many things, but one of them is that it swings—and when it swings, it swings hard.

Over the course of six Paulsberg originals, HPC also demonstrates a strong allegiance to melody. The opening modal title track burns with feverish energy, thanks to the firm but open-ended anchor provided by bassist Trygve Waldemar Fiske and freewheeling drummer Hans Hulbækmo, but when it comes to soloing, Paulsberg favors careful choices over unfettered virtuosity. Combined with pianist Oscar Grönberg—who blends McCoy Tyner-informed, block-chord accompaniment with sparer Nordic lyricism—it suggests how John Coltrane might have sounded, had he opted for space and decay rather than sheets of sound. Paulsberg's attention to tone was inspired, no doubt, from antecedents like Garbarek and Tore Brunborg—without sounding like either—and gives her a unique ability to sear without speed.

Paulsberg's writing is deceptive; enticing, often with seemingly simple concepts, its layers unfold across repeated listens. "Potters Lullaby" starts with a simple percussion motif that becomes more complex when first Grönberg and then Fiske join in for a rhythmically contrary unison line; when Paulsberg enters, it's yet another simple idea that, interlocking with the rest of her band mates, turns into something far deeper. "Sang til Pastor Wang" begins as a spare piano/sax duet, a rubato tone poem setting the stage for the first of two bass solos that assert Fiske as far more than mere rhythm section partner, playing off Grönberg with the kind of profound empathy that normally comes from far more experience and longevity. It's no wonder HPC won the Young Nordic Jazz Competition at the 2011 Trondheim Jazz Festival.

The other track to feature Fiske is the closing "Mufasa," an even darker tune that, in its choice to end in a whisper—Paulsberg's tenor becoming increasingly breathy until that's all that's left—closes what would have easily been included as a Best of 2012 "New Discovery." It may only be January, but Hanna Paulsberg Concept's auspicious debut already looks like a shoe-in for 2013's year-end list.