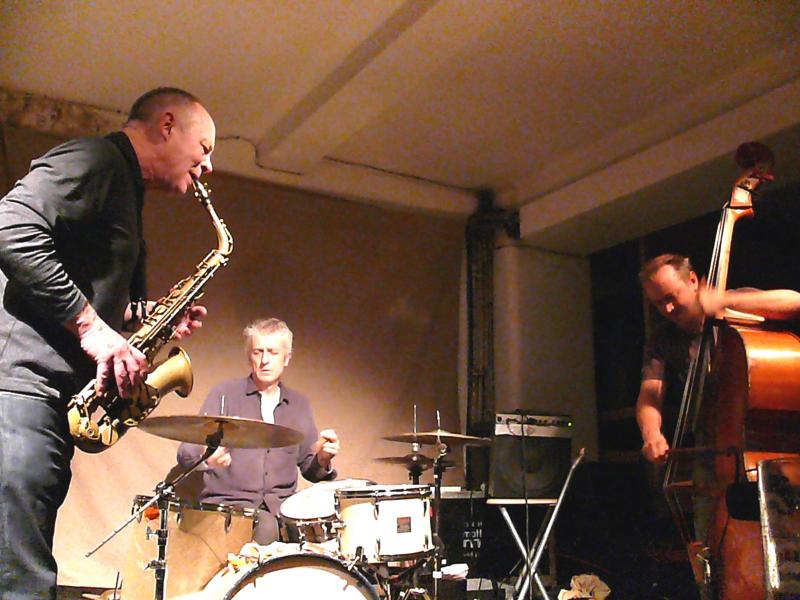 It didn't look promising to begin with. In the dark days of January with the New Year festivities over and done, there's not a lot of enthusiasm for nocturnal adventure, so it was no surprise to see just a couple of people waiting outside before the doors of north London's Cafe Oto opened. But clearly there was promise in the air. By the time saxophonist Alan Wilkinson took to the stage 45 minutes, later there was quite a crowd in attendance—even though Wilkinson appears frequently in the city, helming his own improv night, Flim Flam at Ryan's Bar, just up the road.

Although his name has long been a byword for off-the-dial free jazz mayhem in post-Albert Ayler mode (witness his work as part of the Hession/Wilkinson/Fell triumvirate which made The Horrors of Darmstadt (Shock, 1993) and St. John's (Ecstatic Peace, 1994)), in person the reedman wasn't averse to either melodic or understated passages. During the sound check he could even be heard running through what sounded like Charlie Parker's "Confirmation" to get himself in gear.

Though to be fair, the predominant mood of he evening was confrontational rather than comforting. Of course, the saxophonist was only one component in a well-versed though still unpredictable machine, completed by drummer Steve Noble and bassist John Edwards, both of whom are near fixtures on the London scene and perform in German reed legend Peter Brötzmann's latest trio (heard to compelling effect on The Worse The Better (OTOroku, 2011)), and as the engine for both Decoy, with Alexander Hawkins on Hammond organ, and N.E.W. with Alex Ward on guitar.

By way of introduction, Wilkinson uncorked squealing harmonics from his alto saxophone. Straight away Edwards was on the case, interweaving bowed overtones with the reedman, while Noble's mallets underpinned their out-of-tempo excursion. But before too long they were into high octane territory, though purposeful with shading and nuance. Noble and Edwards maintained a constant give and take, often settling briefly around a groove before moving on. In his cleaner moments, Wilkinson recalled Ornette Coleman, though that resemblance faded once he began overblowing, especially on baritone.

All three continually varied their attack, seeking to catalyze fresh responses. Early in the second set Wilkinson unleashed a sustained and piercing dog-bothering whistle as part of a stop-start exchange of textures, which elicited expressions of wonderment from the crowd. Later he pressed the bell of his alto saxophone against his thigh to extract a muffled snorting, then blew into the bell for a more atmospheric contribution.

However, it was his multiple tongued passages which acted as a recurring motif, meshing effectively with the insistent rhythmic fragmentation of his two accomplices. Wilkinson co-opted simple motifs as the building blocks for expansion, the foundations on which to erect loftier constructs. Often he referenced phrases from the bassman as the basis for further development, thereby creating a unifying factor which increased the cohesion of the performance.

Edwards was as inventive and energetic as ever. At one point during a flowing group interchange he alternately sawed above and below the bridge of his bass, conjuring a wavering tension. Then later he wedged the bow through strings as they were plucked, producing a rumbling undercurrent. Noble likewise balanced intensity and timbre. A favorite trope involved the placement of untethered cymbals on the drum heads, allowing him to strike both in varying combinations of tone and color. But he also smothered his snare with a towel and struck with his fingers in an unceasing quest for the most apposite offering.

There was humor as well, as in an interlude towards the end of the second set, which gave an insight into the unspoken negotiations at the heart of such freewheeling creativity. Noble laid out as a period of cantering syncopation dissolved into a breezy dialogue between Edwards and Wilkinson. The interplay became ever more delicate, until the reedman was blowing the merest whispers and the bassist voiced quiet figures from the top of the neck. As Edwards ceased, Wilkinson pressed his plaint but without response until he broke off and good naturedly berated his partners for lacking stamina. Noble responded that they might lack stamina but they did have taste, which drew delighted "oohs" from the audience.

And then naturally, they continued where they had left off, culminating in further tumult and rounding off a cracking evening, one for which it was well worth braving the winter air.