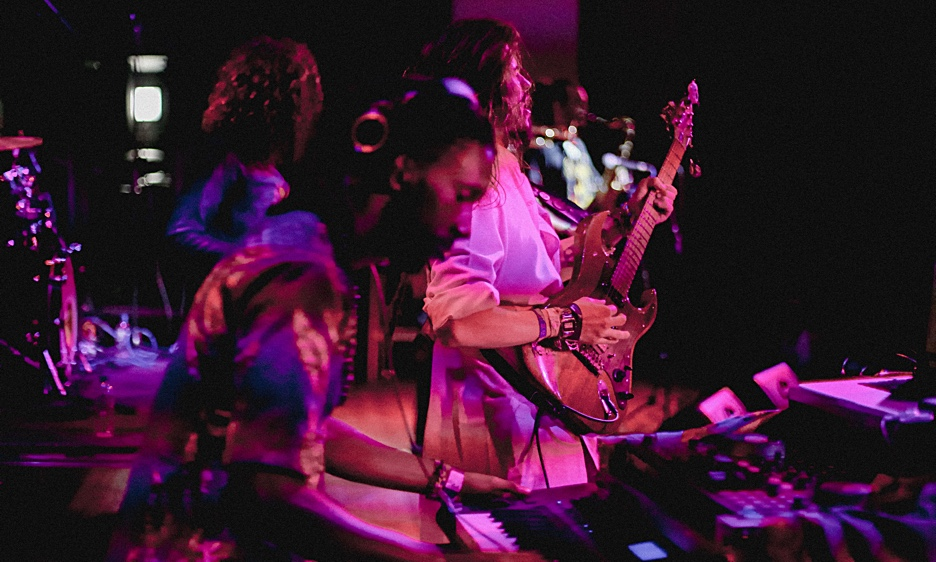 If you're not from London the name Walthamstow most likely means nothing to you, unless perhaps you admire the work of designer and craftsman William Morris. Even to most Londoners it is probably little more than the fabled end of the Victoria Line. And yet in recent years, as the North London borough has undergone rapid urban change (like many others before it), it has managed to make room for itself on the city's already dense cultural map. Case in point, Waltham Forest will be 2019's London Borough of Culture, the first recipient of the £1.35m grant from the City Of London as part of a new initiative from mayor Sadiq Khan. This was the inaugural year of the Walthamstow Jazz Festival, organised by the homegrown label Byrd Out.

The event took place in one of the buildings of Walthamstow's Town Hall, a massive white Soviet-style chunk of concrete. The Ghost Ship stage (named after a beer by the festival's main sponsor) was in the main hall, a voluminous square room with a seated balcony, in which (as former Stereloab frontwoman Laetitia Sadier reminded us) the Sex Pistols played in 1977. To get to the second stage, Copper House, you went down a small flight of stairs to the basement. Here, smaller crowds and better acoustics made for a more intimate (and stuffier) setting. This was ideal for the smaller bands, such as Run Logan Run, made up of Dan Johnson on drums and Andrew Hayes on saxophone.

Sax and drums might seem like an unusual pairing, though it's far from unheard of (John Coltrane's recording with Rashied Ali is a free improv classic). However the success of another British duo, Binker and Moses, has given it some increased visibility, and Run Logan Run are another great example of its potential. Hayes' use of circular breathing and delay effects created minimalist loops and phasing effects over which Johnson displayed some impressive improv and beat-making skills. Their set was at times stirringly soulful, at others feverishly entrancing. Upstairs in the meantime, the first band to perform was the Leeds-based collective Tetes de Pois. Jasmine Whalley, who provided slick Paul Desmond-like solos on alto, was one of only a tiny handful of women heard throughout the event—a long-standing issue in jazz that the community urgently needs to confront. After prompting the still thin but receptive crowd to come forward, the seven-piece outfit proceeded to indulge with some upbeat grooves. Their Afrobeat-influenced blend of fusion set the tone of stylistic eclecticism that would characterise the whole event.

The main stage would shortly afterwards welcome three towering figures of British free jazz. Saxophonist extraordinaire Evan Parker, famous for his use of extended techniques, created undulating shimmers of sound to counterpoint John Russell's muscular chordal attacks on acoustic guitar (he broke a string shortly into the set), and the spry acrobatics of John Edwards, whose double-bass he frequently repurposed as a percussive instrument. Their set was unfortunately marred by what would become a recurring issue throughout the day: poor sound quality. In a large resonating room, the inadequate sound system couldn't compensate for the disturbing background chatter which made the music at times very difficult to hear. This is particularly problematic when—as is often the case with free improv gigs—so much of the experience comes from appreciating subtle variations in texture and intricate musical interplay. Luckily, a trio of this calibre make the experience worthwhile regardless. They are long-time partners, and as recently as 2017 recorded an album together for Byrd Out. Coincidentally, it is called Walthamstow Moon and was recorded in the Old Cinema in Walthamstow where, 55 years prior, Parker had seen a concert by John Coltrane. This gig—in front of an unusually large crowd for free jazz—must have had a special significance for the three of them.

If you were previously struggling to hear the music properly, this certainly wasn't an issue with the next set. As you'd expect given his tenure as lead guitarist for the iconic 80s noise rock band Sonic Youth, Thurston Moore's guitar tricks made for some altogether far more abrasive aural explorations. Guitar hanging low, he would calmly pace the stage, going back and forth between his array of pedals and amplifiers which, by placing his guitar at varying distances from them, he would use to create piercing feedback effects. This was an intense nosedive into the mad world of free-form noise, with Moore using distortion at will, and producing all sorts of bizarre wails, roars and drones from his guitar. His atonal runs across the fretboard, saturated struck chords and outlandish techniques (such as wedging a drum stick beneath the strings) all contributed to this stunning and at times overwhelming (for those of us without ear plugs at least) sonic tapestry, the backdrop of which was provided by the relentless driving pulse and polyrhythmic ingenuity from Steve Noble on drums.

This wasn't the last free improv set, as by 7pm that evening, another duo had taken to the main stage to "make up some music" (in the words of the saxophonist Binker Golding). His sparring partner was the pianist Elliot Galvin and their joint improvisation was undoubtedly one of the highlights of the event, drawing a rapturous response from the crowd despite difficult listening conditions. Like on their recently released album, Ex Nihilo, their set was an astounding exercise in free-form dialogue. The pair's technical brilliance, and Galvin's creativity in reshaping his instrument's sonic palette (by plucking strings and placing objects over them, for example), are of course noteworthy. But what is truly remarkable is their deep musical empathy— always finding each other, never missing a nuance, and reaching levels of synchronicity that few improvisers can. This was brilliant spontaneous music, and their (hopefully long-lasting) partnership is one to follow closely.

The refreshing diversity of this festival's line-up meant that an experimental gig like Golding and Galvin's could be sandwiched between two more beat- driven sets. There are many exciting young artists currently emerging from London's vibrant jazz scene who are producing original new forms of dance-oriented fusion. Cykada, who'll be releasing their first album in March 2019, gave one of the most energetic performances of the night, in part thanks to the kind of exuberant stage presence that is rarely seen in live jazz. With hypnotic grooves and the magic on electronics from Tilé Gichigi-Lipere, the band carried you from afrobeat rhythms through avant-rock jams all the way to dark and intense IDM reminiscent of Flying Lotus. In a similar vein, PYJAEN (also from London) followed shortly after. Where Cykada were more about atmosphere, PYJAEN were more solo-driven—and to fantastic effect, since they have some particularly prodigious improvisors among their ranks. They were the ultimate jam-band of the night. A particular mention goes to the horns. Dylan Jones' hard-bop phrases on trumpet were always inventive and on point, always incisive and sharp, and perfectly complemented Ben Vize's funky, high-velocity, Michael Brecker-style chromatic lines. An electrifying set.

Curiously, in an event where musical boundaries were constantly being fuzzed, the closest thing to straight-ahead jazz came from an artist that not many people associate with the genre. Billed as the festival's headliner, Cream's legendary drummer Ginger Baker made only a very brief appearance on stage. Performing with his Jazz Confusion unit, their set was disjointed and sluggish, partly due to them not playing together in nearly three years. What was impressive however was Baker's resilience. Having got out of hospital that very morning, the frail 79 year-old, who admirably had insisted on performing, mustered the strength to play for about 15 minutes. At this point, he took to the mic to announce that he had to return to hospital and was therefore passing the baton to his fellow drummer Tony Allen. After expressing a heartfelt thank you to the many fans gathered to see him, he received a sincere and touching ovation. As he was standing and seemed about to leave, he couldn't resist joining in with his lifelong friend for a few more bars (the two met when Baker relocated to Lagos in the early 1970s).

Tony Allen taking over did little to invigorate the proceedings, as unfortunately sound issues once again rendered the experience quite challenging, both for the musicians who were having to talk to the sound engineers, and the audience who couldn't hear much. This made for a rather anticlimactic end to an otherwise successful event. For a first edition, Walthamstow Jazz Festival was remarkably bold and ambitious. The program was fresh and varied, and the setting extremely fun and lively. As those inevitable hiccups that come with first attempts are smoothed over, we can surely expect this festival to become a mainstay of the London scene, especially if they keep up this kind of smart, original programming. Bring on next year.

I'm originally from the UK but currently living in Toulouse, France. My background is in physics and information technologies, and today I work as a freelancer.