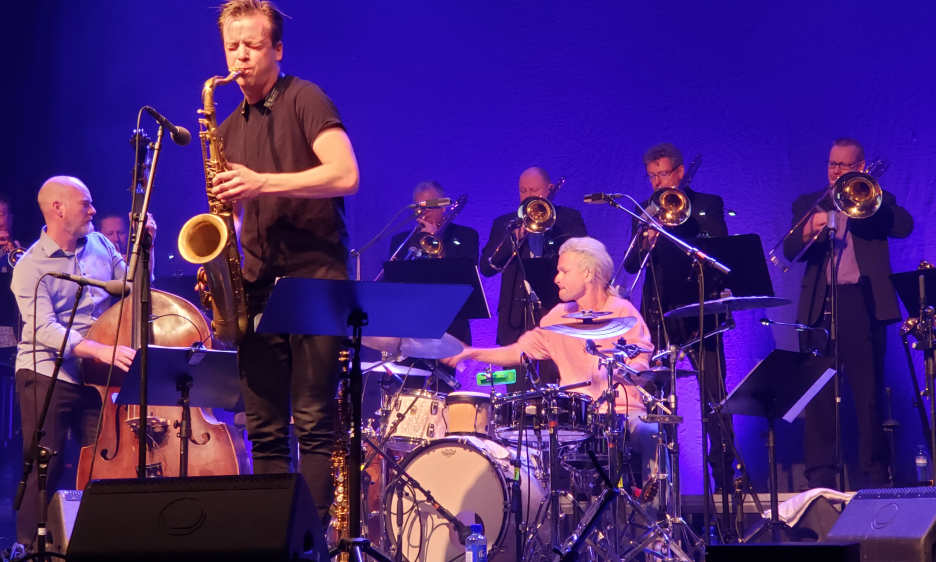 Norway's venerable Vossa Jazz festival kept the faith via “Plan B” operations in the past two years... When the real, real-time thing returned in early April, in its full and venturesome glory, many of us returning regulars felt a sense of triumphant homecoming.

Like many jazz festivals trying to find a safe passage through the challenging pandemic hurdles, Norway's venerable Vossa Jazz festival kept the faith via "Plan B" operations in the past two years. Hybrid streaming and live models and a pared-down festival last September kept this respected festival alive in the warm-up to next year's grand 50th anniversary (nearby Bergen's Nattjazz festival celebrates its 50th this May).

When the real, real-time thing returned in early April, in its full and venturesome glory, many of us returning regulars felt a sense of triumphant homecoming. Live music, generally, and jazz festivals, in particular, thrive on the importance of being there, a critical element in what makes festivals tick. Many of this festival's concerts take place in venues in the vast Park Hotel, nuzzled up against Lake Vangsvatnet.

Some of the more interesting and intimate shows also happen in the Osasalen performance space of the Norwegian folk music-geared Ole Bull Academy. This year's Osasalen roster featured a standout show by maverick Danish pianist Jeppe Zeeberg—a tour de force outing mixing up virtuosity and dada-istic crackpottery. We also basked in the rugged ambient folk/jazz of Linus and stellar hardangerfele (Hardanger fiddle) player Nils Økland, and the fierce sound of freedom fighting trio Arashi—with reedist/ritualist Akira Sakata and powerhouse Norwegian drummer Akira Sakata. Nilssen-Love's alter ego, DJ Love Machine, had been spinning vinyl from his famous, exotic collection in the wee hours the night before, but in this early afternoon set, he regaled us with the full measure of his free-ranging, expressionistic drumming might in Arashi, replete with gong play.

A strong "being there" imperative also hovers over concerts in the city's strikingly picturesque and historic 13th century church, the Vangkyrkja, hosting more concerts than usual in this edition. In fact, a certain poetically justice prevailed as the kick-off concert spot went to church, where legendary keyboardist Ståle Storløkken ventured into a variation on the rare theme of a mostly-improvised pipe organ concert on Friday afternoon. He returned to the sacred space a day later, joined by Voss regular, saxophonist-composer Trygve Seim and a youth choir, performing the leader's semi-liturgical-waxing piece LUX. Celebrated and subtle-cum-soulful vocalist Solveig Slettahjell filled the church late on Sunday with her inventive, empathetic trio. They served up imaginatively-arranged Great American songbook pieces but struck close to home by ending with a semi-rumba version of signature Norwegian composer Edvard Grieg's "Ved Rondane."

As a general theme, this festival—sculpted by director Trude Storheim in her 15th year at the helm—turned inward to survey the Norwegian Jazz scene. In so doing, the program became a fascinating portrait of that nation's surprisingly strong, sensitive and also varied jazz ethos. Typecasting Norwegian jazz is a dangerous game, especially for those of us who were weaned on the introspective and ethereal Norwegian sounds presented through the filter of ECM Records' Nordic roster.

On this year's program, diversity was on full alert. A more "ECM-ish" character (a term used loosely) came through the cool-yet-warming atmospheric sounds of the Arctic Ice Music Ensemble led by Terje Isungset, who has appeared on ECM releases as has his fluid trumpeter Arve Henriksen. Isungset led the ambient charge from his "ice instruments—" a surprisingly versatile tall drum and shaker-like sonic concoction, an ice marimba and shofar/alphorn-like clarion caller, fitted with reverb swaddling. Elsewhere in the Ice Ensemble, ever-flexible bassist Anders Jormin supplied foundational and coloristic materials along with a vocal quartet conscientiously including and championing Sami singers.

A very different Norwegian seized the spotlight when masterful young tenor saxophonist/composer Marius Neset led a potent set with the Bergen Big Band. Neset, one of the strong tenor players of his generation, creates bright, optimistic music, but with fiendish complex rhythmic structures (partly influenced by his mentor Django Bates), which were handily navigated by the Bergen ensemble in Voss.

Splitting the difference of mainstreaming and post-Ornette Coleman-ish behaviors, the excellent young Norwegian quintet Friends & Neighbors (with recordings on the Clean Feed label) made their way through an distinctive admix of free improv and taut structural designs. Free-bop and ever-morphing collective spirits were also part of the equation of their late-night set.

Turning yet another stylistic corner, young saxophonist-conceptualist Signe Emmeluth's Amoeba forged her own unique path between freedom, structure and the art of the primal scream with the piece "Banshee" (one of five newly-commissioned pieces in this year's program). The alto saxophonist/bandleader commandeered (and enabled) an all-female septet, which included the legendary radical vocalist-electronician Maja S.K. Ratkje in an upfront position onstage and in the mix. Ratkje lived up to her reputation as a magical conjurer, at once abstract and visceral. Hanging in Emmeluth's balance as composer/situationist were vigorous post-minimalist structured sections, bursts of organized spontaneity and a beautifully hair- raising moment of a cathartic "banshee" scream by all onstage. The bracing scream moment felt like both a celebration of feminist ideals and a satire of its misguided tropes.

Ensemble projects of mixed idiomatic and ethnic "parentage" are often to be found in Voss, and the Norwegian jazz scene in general. Jon Balke, a frequent ECM artist who has also graced many a Vossa Jazz outing, gave the official opening concert at the Park Vossasalen early on Friday evening, this time with his Middle-Eastern-inspired Siwan project, a recording of which was released on ECM in 2008.

For the festival main commissioned "Tingingsverket" piece, Andreas Ulvo stepped out of his frequent position as a coveted sideman (including as the thinking person's pianist in Slettahjell's trio) into the composer-arranger spotlight, for an evening-length suite called Vindvall ("Windy"). Plugging into the Norwegian tendency of adventurous musicians culling ideas and languages from various traditions, Ulvo's piece tethers classical lite, Norwegian folk and ambient elements into his ear-affable mix, for a mixed ensemble including strings (the indigenous hardangerfele included), a baroque harp, bass (the eminent Mats Eilertson) and percussion. All in all, it was a peaceable kingdom of a musical tapestry, suitable for listening as or background balm.

Special note of praise: percussionist Helge Norbakken, who brought his sensitivity and elastic sonic powers to bear on both the Balke and the Ulvo projects, deserves some kind of medal as a Vossa Jazz All-star this year.

One of many traditions at Vossa Jazz finds the participants in the main "Tingingsverket" commissioned work being celebrated with a special smalahove dinner celebration. The delicacy and ritual in Norway's Hardanger region involves serving a half sheep's head on each diner's plate, eyeballs and cheeks intact, with toasts of Aquavit and the vegetable mash of nepestappe on the menu. I have been an unabashed fan of this tradition, and I've been informed that another avid fan, in years past, was Abbey Lincoln. Good company.

This year, I sat a table with visiting author Randi Fuglehaug, a Voss-born novelist based in Oslo whose latest book, Tonedød ("Tone- Dead") concerns a murder-by-poisoning at the Vossa Jazz fest. Suddenly, I had a thought: if an artist or a fan took extreme umbrage to a review of mine, the annual smalahove gathering I so covet would be a fine place to poison the sheep's head or aquavit.

To round out a fine return to "normal" festival life, Vossa Jazz closed with a surprisingly insightful tribute to Joni Mitchell, "Heim med Joni." Joni tributes can be dodgy affairs and the field seems over-populated by now, but there was something special about this version, sung entirely in Norwegian and with narrated texts relaying the story of Mitchell's Norwegian roots (on her father's side). Especially on the jazz-colored tunes "Hejira" and "Amelia," luminously sung by Annlaug Børsheim (also playing hardangerfele and open-tuned guitar), the tribute had the effect of reinterpreting Mitchell's profound musical poetry.

Suddenly, I could hear Mitchell's unusual sense of harmony, space and "blue notes" as possibly descendant from some Norwegian blood and Norwegian folk asethetic, vs. the British Isles influence on most "American" folk music. This is one of the things I learned and savored in Voss, Norway this April.