Various Artists: Verve The Sound of America: The Singles Collection 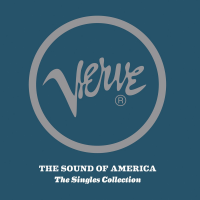 Verve is one of the greatest labels in the history of jazz, and Norman Granz was one of jazz's greatest producers. So why is The Sound of America: The Singles Collection such a mess of a box set?

This had such great promise. After all, Verve was home to many legendary performers: Ella Fitzgerald, Billie Holiday, Charlie Parker, Dizzy Gillespie, Jazz at the Philharmonic, Stan Getz, Jimmy Smith. So a boxed set of Verve's greatest hits should be flat-out amazing.

And so it is—but this isn't that box set.

The Verve box set you don't want? It's The Sound of America: The Singles Collection.

Let's start with this premise: Any box set that covers the history of a label is going to be inconsistent. Accept it. Not every song can be a classic. Sadly, The Sound of America has an outrageously high ratio of schlock to gems.

But there are 100 tracks on 5 CDs in this box set, mostly recorded from 1947 to 1968. They cover some absolutely supreme jazz history, but also a lot of outrageously awful 1960s covers of pop songs and show tunes.

There are 17 songs from Ella Fitzgerald alone. Some are all-time classics, but many are ho-hum pop and a few are so horrid, you wonder how they ever got made. (Who convinced Ella that "Ringo Beat" was a good idea?) There are 12 Jimmy Smith cuts, and the same is true here—a few shiny gems (Jimmy sings on "Got My Mojo Workin'!") to pure dreck (a remake of "Goldfinger"?!).

Sadly, no one is immune to the schlock treatment. There's Bill Evans' "On Broadway" and "Theme from the VIPs." Anita O'Day's "The Rock & Roll Waltz." Blossom Dearie's "Teach Me Tonight." Kai Winding's "More" and "Mondo Cane #2." Stan Getz covering "Blowin' in the Wind." And dozens of tracks with syrupy strings and goopy girl singers in the background. Even Fred Astaire gets one song. Was that really necessary?

I know, I know. When chronicling singles, your choices are limited to songs that were actually singles. Got it. So great album cuts are off-limits. Still, the box set didn't have to have 5 CDs—3 would have been fine—and it didn't have to include so much filler.

Maybe The Sound of America will evoke waves of nostalgia among folks who grew up with the hits here. For the rest of us, to paraphrase Obi-Wan Kenobi, these aren't the Verves you're looking for.