Uncompromising Expression: 75 Years of the Finest in Jazz 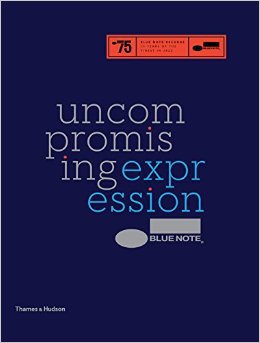 It's probably still a bit of an understatement to suggest that Blue Note Records has become one of the most iconic labels associated with recorded jazz. Now in its 75th year, the label has undergone radical changes over the course of its history, not the least of which has been the recent appointment of Don Was as president and keeper of the flame. Over the course of this past year, Was put in place a reissue program on vinyl that aims to bring back to print 100 of the label's most important titles. Inconsistent quality control has made that project somewhat of a hit and miss affair and the same might be said for this new 400 page tome to the label on its anniversary year.

First published in the UK and now receiving its Stateside release, Uncompromising Expression: 75 Years of the Finest in Jazz (Chronicle Books) is author Richard Havers' accounting of the history of the legendary jazz label which was started in 1939 by German immigrants Alfred Lion and Francis Wolff. It's not really a coffee table book per se, but it's length and graphic quality will make for a great perusal, even if one if merely looking at the photos and saving the text for later.

There is much to be said for the importance Havers has placed on the artistic identity of the label. The opening few pages alone offer color matched collages of some of the label's most striking album covers. In addition, there are many fine Francis Wolff photos from the actual sessions, several printed in contact sheet form so that one can more easily see how designer Reid Miles used the photos to assemble his signature album covers. There are also scans of pages from Lion's session notebook and of the Scotch tape boxes with recording engineer Rudy Van Gelder's handwritten notes.

Diehard collectors will also appreciate the scans of inner sleeves and album cover backs, not to mention a page of "obis" from the Japanese reissues. Information regarding the 'ear' and Van Gelder stamps in the inner wax of the vinyl offer further delectable details that the novice will find interesting. There is even a two-page spread put together by London Jazz Collector that illustrates the 23 different labels used over the years on the actual vinyl releases.

Spread across the pages of the book are 75 key albums that the author features with annotation and commentary, similar to the approach Ashley Khan took for The House That Trane Built: The Story of Impulse Records. The difference here is that while Khan's writing includes quotations from key participants and fascinating little known tidbits, Havers' text offers more of his opinions on the music and less in the way of revelatory facts.

As for the rest of the text, Havers seems to be much more interested in the early lives of Lion and Wolff and devotes a full fifty pages to their formative years in Berlin and their eventual move the New York City. Of course, it would be the pair's discovery of boogie woogie pianists Albert Ammons and Meade Lux Lewis that would provide Blue Note's opening salvo. Havers then goes on to recount how the label was slow in coming to grips with the bebop innovations of Thelonious Monk and others.

Copious notes on the changes in technology are highly useful, exploring the movement from 78s to LPs and then from monaural to stereophonic sound and the challenges these developments involved. Furthermore, the accounting of the roles Rudy Van Gelder and Reid Miles played in the label's success is spot on and will be of particular interest to the uninitiated.

Not as defined and somewhat lacking is a balance in presenting the entire history of the label. In fact, Havers' own biases can be cited on more than one occasion. When referring to the work of George Braith, an innovator who is still plays a role on the New York scene, the author states that he was known for playing the soprano and alto saxophones together and that you might like it if "that's your thing." He further states that Braith's signing was "indicative of a pending hiatus in Blue Note's search for new talent," suggesting that he provided a mere filler until some more substantial talent was discovered.

These oddities aside, the real disservice that Havers does is in offering only cursory coverage of the label's efforts in the '80s and early '90s. Only about a page and a half are devoted to a time period that was ripe with new music. It is inexplicable to not have mentioned the excellent quintet that drummer Tony Williams led featuring Wallace Roney, Billy Pierce, Mulgrew Miller, and Charnette Moffett. Also missing is any mention of the exquisite Don Pullen-George Adams Quartet and the superlative albums recorded by drummer Ralph Peterson, Jr. This reviewer begs to differ with Havers when he states that none of these albums from the period "resulted in the hoped-for breakthrough album or track."

It could be argued that Blue Note was never the same after Alfred's departure in 1967 and Wolff's death in 1971, but Havers has no problem in devoting nearly ten pages to music from the past fifteen years. Furthermore, of the 75 featured albums, ten of them are releases from this time frame. In fact, the music of Robert Glasper and Norah Jones are as far removed from the heydays of hard bop as Sidney Bechet was from the music of The Jazz Messengers. The difference being that under Lion and Wolff there was a thread of coherence that is now sadly lacking.

In the end, the parting shot is given over to a two-page spread of Gregory Porter. How history will see his place in the oeuvre of Blue Note's illustrious history remains to be seen, but it seems a somewhat inconclusive departure based on Blue Note's lineage. A far more in-depth look at the personalities that contributed to the look and feel of the label can be found in Richard Cook's Blue Note Records: The Biography. Perhaps, taken together, a reader will come away with a much better understanding and appreciation of the impact Blue Note has made on the course of musical history.