Low Society: You Can’t Keep a Good Woman Down 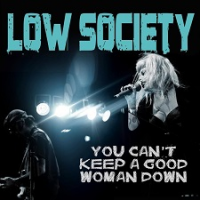 Let's not insult Low Society lead vocalist Mandy Lemons by noting she was influenced by Janis Joplin. That is the lazy critic's out. Better we describe her as the love child of a serious Amy Winehouse and Big Mama Thornton, irradiated by beta particles that had once passed by an AM radio, late at night, playing "Ball and Chain" in 1968. Lemons is a tornadic force of nature laying waste to all of the blues-rock produced since the 1960s. Lemons is who Sass Jordan wishes she was and who Susan Tedeschi almost reaches. You get the idea.

It does not hurt her or her band's bona fides that Lemons and company are centered in Memphis, TN...the rightful, justified and sanctified home of the Rock 'n Roll Hall of Fame (Cleveland, Pshaw!) where they studied at the knee of local legend Dr. Herman Green, evolving from a well-intentioned blues band into a musical vision reaching critical mass. For all of the talk here of Lemons, she does have a partner, guitarist Sturgis Nikides, who plays guitar, slide and standard, at a level above most. Nikides is the first slide guitarist I have heard employ Sonny Landreth's pioneering fingering behind the slide, giving his playing a textured, tactile sound buffeted with intelligently selected overdrive and tremolo. He does so effectively.

This is not a band solely based on technique and effects. This band, following its mistress Lemons' lead, is a feral and untethered spirit that makes its musical statement like the basement door slamming in the dark, off its hinges. Powerful, virtuosic and savage, Low Society reveals its uncompromising character in the first three songs, all bolstered by the remainder of the disc. The opener "Crammed & Jammed" has a Delta cum Chicago slide crunch established by Nikides and Lemons singing with moonshine abandon. Rick Steff provides a roaring B3 wave for the band to surf. This is the New South kicking in the screen door.

"Voodoo Woman" is a twelve-bar blues riding on the back of the freshest slide-guitar riff recently conceived. This is where Nikides summons his inner Sonny Landreth, turning the gas on high and breathing deep. Soupy and humid, the bayou hitched a ride from Metairie and headed upriver to Memphis and the lobby of the Peabody Hotel. Lemons is the voodoo woman and her charms are as dangerous as they are sensual...everything costs something. "Need Your Love" is a most brilliant eutectoid of Texas Blues and pre-Weimar cabaret, with Lemons a Southern Fried Marlene Dietrich strung out on absinthe and gris-gris and Nikides a demented Django plucking his nuclear strings. Steff's accordion is a perfect ringer thrown into this miasmic circus of sound.

It this is not eclectic enough, "Son House Says" is a throwback '70s jam evoking the spirit of its Father. "This Heart of Mine" mines the Jimi Hendrix-Stevie Ray Vaughan blues axis of all its guitar gold and silver. Lemons and Nikides go to church in "Up in Your Grave" while taking a country honk in the saloon-piano fueled "Let Me Ride." "No Money Down" has Nikides playing his best Luther Perkins while Lemons channels Patsy Cline from Dante's vestibule of Hades. Over the top, you ask? This band is over the top, deserving every twisted metaphor given them. I won't hear another recording of new music better this year.

Crammed and Jammed; Voodoo Woman; Need Yer Love; Son House Says; You Can’t Keep a Good Woman Down; This Heart of Mine; Up in Your Grave; Let me Ride; No Money Down; You Got a Right; el Diablo; Should ‘ve Known Better.