By PAUL RAUCH
February 2, 2017
Sign in to view read count 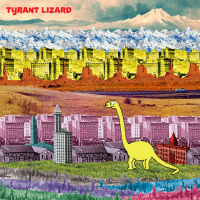 Tyrant Lizard is a trio that evolved from the Improvised Music Project at the University of Washington in Seattle, a program that exists as both an artistic movement and registered student organization led by eclectic modernist trumpeter and composer, Cuong Vu. Each of the three musicians are truly original voices of their respective craft, featuring trumpeter Ray Larsen, guitarist Gregg Belisle-Chi, and bassist Carmen Rothwell. The trio's self titled first recording is a soundscape of vivid visual imagery, of sonically charged, wide open spaces, interspersed with textural, ethereal passages that resemble bold, colorful strokes, as if painting with sound. Both the original and traditional compositions are modern improvisational vehicles with roots in the American folk traditions of the 19th and 20th centuries.

While trumpeter Ray Larsen is best known for his work with more experimental ensembles such as Chemical Clock , and several groups involving pianist/ composer Wayne Horvitz, he is also a mainstay with the Harry James Orchestra, Michael Shrieve's Spellbinder, and the Jacob Zimmerman Quintet. His ability to play in more free, improvised formats, as well as expressing his roots within swing and bop rhythms, gives him a very unique and original voice that is gaining notice on a national scale. His two recent releases on the Tables and Chairs label, How Glass Is Made (Tables and Chairs 2016), and New Studies of the Starry Skies (Tables and Chairs 2016) exemplify his harmonic daring, and original approach to composition, and trumpet playing.They are the first two of three works from his Modern Achievements trilogy.

Guitarist Gregg Belisle-Chi, has maintained a busy career in music performing and recording with various jazz, avant-garde, pop/rock, folk, and chamber ensembles. He has performed with Jim Knapp's Scrape Orchestra, Andy Clausen's Shutter and Split Stream Big Band, Fluke ,and performs solo and duo music with vocalist Chelsea Crabtree. He is influenced, yet not constrained by several traditions. His guitar sound alludes to the folk indulgences of Bill Frisell, and is steeped in experimental and chamber improvisational forms.

I first noticed Carmen Rothwell as a high school student sitting in with trumpeter Thomas Marriott. Her meteoric rise in the jazz and improvised music communities was propelled swiftly by her work in the Cuong Vu Trio with drummer Ted Poor. She lent her talents over the past few years to projects with Bill Frisell, Dave Douglas, Wayne Horvitz, and Wally Shoup.

Collectively, Tyrant Lizard is a trio recording of young, talented, innovative musicians experimenting with textures and colors, to see where they fit in the musical world. Here I am. Who am I? These are questions every musician must consider, and conversely, what each listener must perceptively consider both musically and visually.

While each member of the trio are contributing composers, it is the interpretations of two American classics, the traditional folk song, "Shenandoah," and the Cole Porter classic, "Don't Fence Me In," that perhaps most clearly portrays the sonic nature of this work. The irony of the latter did not escape me when I first heard this trio perform it live, nor when I heard the interpretation on this CD. Porter was writing a cowboy song written for a 20th Century Fox musical, based on a poem by Montana highway engineer, Robert Fletcher. " Give me land, lots of land, under the starry skies above, don't fence me in," indeed this collection of musicians refuses to be "fenced in" by an means in terms of their musical wanderings, and their subsequent musical discoveries. If bebop is like meandering down a busy avenue in Manhattan, with the vibrant pulse of the city the engaging force, the music on this CD is more like a journey through the four corners region of the southwest, it's forever sky and wide open spaces, it's occasional referencing to remote musical outposts. While free music movements have often completely eschewed melodic contribution, Tyrant Lizard proceeds with keen awareness of when a melody is so powerful that it is the liberating factor in the piece. The road to freedom is very often just that, a road. Such is the case with "Shenandoah," which projects such sublime beauty, romance and humanity, that interpretation must in some shape or form pay homage melodically. The melody in itself is an artistic expression, it somehow affords a preference over alternate interpretation. In essence, throughout this collection, melody is stated and interpreted much like any standard jazz album, but presents different imagery, within a different musical space. Their undeniable musical chemistry, love of blending jazz and folk music, and excitement to explore vast musical territories with each other, comes across as three separate voices revolving around a common center, reciting a common mantra.

Ray Larsen's "Gargoyles," best expresses the individual accolades of each participant, as well as the collective genius of the group. Larsen and Rothwell state the theme, layered upon heavy textural harmonic blasts from Belisle-Chi. The guitar work rises from the ashes to state melodic interpretation as well, leading to wide open interpretive spaces that enable the expressive well from which this trio continually draws. While the influence of the IMP experience is evident in the work, in the end, compositionally and in interpretive terms, each original piece on this record is fresh and original, and well worth the patient and attentive listen this recording deserves.

The jazz and improvised music scene in Seattle is notably diverse, the music takes on every shape of the form, on a nightly basis. Choices abound, the musical cross currents create a continual flow of creative energy. It is exciting to think about where these three musicians will be in ten, even twenty years, and what the musical vapor trail will resemble along the way. As I write this, Rothwell has relocated to New York, and Belisle-Chi has just made the same move. It's a common thing for Seattle born and bred musicians, to move to New York to find themselves and their careers musically. Some stay, some return, dues paid, and continue to nourish a scene not afraid to embrace individual expression, and grant latitude to finding one's true musical expression. By immersing in the works of these three young musicians, whether it be in this ensemble, or other works, one definitely comes to the conclusion that there is much yet to be heard from Larsen, Rothwell and Belisle-Chi. Sometimes the road to freedom is just a road.