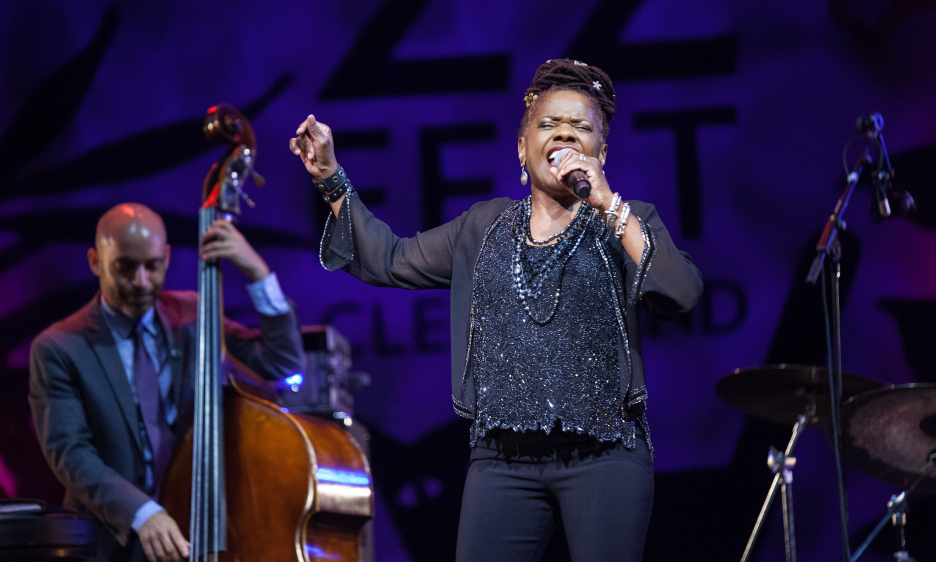 Witnessing the moment-by-moment interaction between musicians is one of the sublime pleasures of attending a jazz concert. There were plenty of opportunities to do just that during the Tri-C JazzFest Cleveland, but for me the sweetest such encounter didn't occur onstage. It happened between sets on Sunday when the arrival of the shuttle van backstage set off a scrum of embraces, clapping and exclamations of joy.

As the van pulled up, I was talking to bassist Adi Meyerson, who was waiting to go on with Bria Skonberg's band. "Even though we live in the same neighborhood, some of us haven't seen each other in person for more than a year," she explained and then excused herself to join the celebration.

Though Clevelanders live 500 miles from Brooklyn, those of us on the other side of the stage know the feeling well. Some of us hadn't seen live music in person for more than a year and there was no shame in savoring the pleasure to the fullest.

Last year's Tri-C festival scheduled for June 25-27 was among the first to have been cancelled because of the COVID-19 pandemic, though it was eventually presented as a more modest virtual event in August. For 2021, festival director Terri Pontremoli played the odds and moved the festival to early September, a splendid time along the Great Lakes. She also trimmed the event from its customary three days to two. Most crucially, she traded the theaters of Cleveland's downtown Playhouse Square district for Cain Park in the inner- ring suburb of Cleveland Heights.

There was some risk in this, but Pontremoli is a pro's pro and an old festival hand who knows exactly what she's doing. So, it's no surprise that on a user-experience level, at least, the gamble paid off generously.

Cain Park's outdoor stage faces a generous concourse of fixed seating, both covered by a flat roof. Beyond the seating area, a lawn area not unlike that at Tanglewood or Cleveland's own Blossom Music Center (though much smaller than either) beckoned. If you weren't ready to return to indoor events yet didn't care to sit in the rain, Cain Park gave you everything you wanted. It was a brilliant compromise.

Brilliant, too was the convenience of locating all festival events (which also included talks, and performances by student ensembles) in a single venue. Most importantly, the glorious late-summer weather cooperated fully. The only decision that could be second-guessed belonged to the NFL, which thoughtlessly scheduled the Cleveland Browns ("This is our year!") against the powerhouse Kansas City Chiefs on Sunday afternoon. This had a visible effect on attendance, and more than a few festivalgoers listened to the music while watching the game on their smartphones.

But the music was the thing, and whether it was because the big-ticket crossover acts weren't touring or because nimbler (and hungry) jazz musicians were eager to get back on the road, this was the most jazz-oriented Tri-C festival is a while.

Consider Saturday's lineup of vocal sensation Samara Joy 2 with Pasquale Grasso, Lakecia Benjamin's Pursuance: The Coltranes project, the Christian Sands and the Spanish Harlem Orchestra, any one of whom could have been the headliner.

Joy might be the most appropriately named musician working today. Her set basically recapitulated her eponymous debut on Whirlwind Records, which is one of the year's best. That record revealed a young artist with great time, precise intonation and a sure grasp of the jazz tradition. What didn't come across on the record was Joy's winning stage presence. As a welcome to a convivial summer reunion, she couldn't have been a more perfect hostess.

Following Joy, Benjamin turned up the heat for a set ablaze with intensity and conviction. She played music from 2020's acclaimed Pursuance: The Coltranes (Ropeadope), dedicated to John and Alice Coltrane. With her cutting-torch tone, Benjamin built successive waves of high-pressure phrases that shattered into fragments. When she snapped these off, she pulled her alto away as though it were too hot to touch. Benjamin and and her excellent band of pianist Zaccai Curtis, drummer EJ Strickland and bassist Lonnie Plaxico played as though they had been waiting to unleash all the accumulated anger, frustration and sorrow of the last year in a blast of righteous fury.

Pianist Christian Sands who simply dazzled. (piano virtuosity would be a theme of the festival). Opening with Geri Allen's "Feed the Fire" might have served as a statement of purpose with Sands unspooling finger-busting supersonic runs like a Marvel superhero summoning thunderbolts from his hands. He stretched time then compressed it into a ball of feverish energy. Yet it was the eye contact between Sands, bassist Alexander Claffy and especially drummer Clarence Penn that was most transfixing. Penn, who owns the best smile in jazz since Billy Higgins is one of jazz's most musical drummers and intense listeners. For nearly 90 minutes, he never took his eyes off his bandmates and it was difficult to take one's eyes off him.

Before the headliners took the stage, an all-star intergenerational band of Cleveland jazz luminaries played a sprawling yet affectionate set. If the pieces didn't always fit in this all-comers band, that was never the point. Pride runs deep in this town and the audience caught all the signals, rewarding their heroines and heroes with well-deserved respect and love.

It's a shame that the crowd thinned somewhat for the Spanish Harlem Orchestra. These guys always bring it, and their set exploded from leader Oscar Hernandez's first countdown. There was something almost unbearably touching about ending the evening of September 11 with the SHO. With their drum-tight unity, fearless professionalism and streetwise swagger they transmuted in sound the pride and spirit of a great city.

Marquis Hill, who opened Sunday's program, did much the same for his hometown of Chicago with a set that was powerful, tender, mysterious, caressing and blistering by turns. Like the greatest of Chicago players, Hill hears all music as one music, and so he offered slow-burn R&B balladry, incandescent post-bop soloing, levitating spiritual jazz and Sons of Kemet-style Afro-Caribbean grooves without condescension. As a soloist, Hill plays with a keen sense of drama, building solos to a climax, Freddie Hubbard-style, but without Hubbard's theatricality. Bassist Junius Paul, impassive as a statue in a dashiki and what looked like knitted yoga pants, bumped out inexhaustible grooves on his red, five-string bass while Makaya McCraven was a tornado on drums in what was the most neck-snapping and forward-looking set of the festival.

Coming on its heels, Bria Skonberg's genial set was a bit like stepping back in time. Like Hill, the Canadian singer and trumpeter surveyed many different musical styles, but where Hill served up a dazzling menu of fusion cuisine, Skonberg's was like a tasting menu of small plates. "Elbow," a slow blues over a New Orleans parade beat was followed by "High Hat, Trumpet and Rhythm," a 1930s novelty number for Valaida Snow, then "Villain Vanguard," a post-bop vamp tune in 12. The band was tight and Skonberg eager to please, but on a weekend that offered so much focused intensity, her set sprawled.

So too did the 5 p.m. performance by the Emmet Cohen trio, but in a very different way. Cohen is an astonishing virtuoso who can seemingly play anything . At Tri-C, he played everything: the entire history of the jazz piano, from silky sambas to up-tempo swingers like the Lawrence Leathers tribute "Toast to Lo" to heart- stopping ballads. He even played the prehistory of jazz piano in a concluding medley that started with James P. Johnson's "Carolina Shout," and ended with "Struttin' With Some Barbecue." It rightly brought the crowd to its feet, but most impressive was Kyle Poole on drums. Responsive, provocative and wildly creative, Poole was a revelation.

And what is there left to say about Catherine Russell, who ended the festival? She's a walking encyclopedia of American popular idioms whose recording credits include David Bowie, Madonna and contemporary classical composer Nico Muhly, and whose repertoire at Tri-C reached back to "He May Be Your Dog But He's Wearing My Collar." a novelty hit for Rosa Henderson in 1923. She sang it with a winking lasciviousness that had some in the crowd laughing out loud, but "Dog" was no novelty number. After all, her father Luis Russell began his own recording career just three years later. This song, like everything on her program, was music that Russell has heard her entire life, and her sovereign command proved the point. Whether bouncing the old calypso "Make It Do" or luxuriating in the saloon balladry of "East of the Sun," Russell had the audience hanging on every lovingly shaped phrase. This was eclecticism, for sure, yet it was eclecticism employed in the service of the continuum of the music, a continuum the dazzling Tri-C Fest both celebrated and joyously expanded.

What more could you ask of a jazz festival?