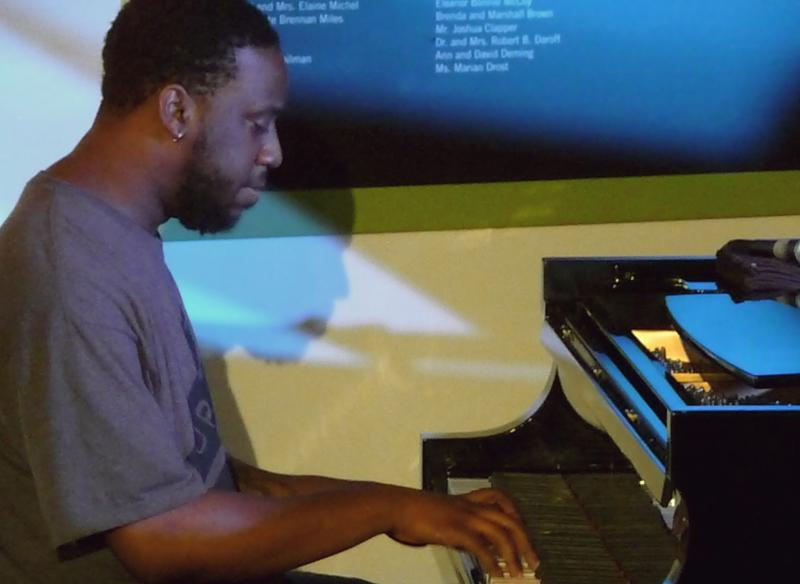 Over the years, the shows at the Museum of Contemporary Art Cleveland have been among the festival's most adventurous. Recent years have featured pianists Omar Sosa and Vijay Iyer, and flutist Nicole Mitchell. Pianist Robert Glasper was on the bill this time around with bassist Alan Hampton and drummer Mark Colenburg, a pair Glasper claimed had never played together before. It didn't show. The trio seeded and tended an organic, flowing music that bent on a mood's whim. Glasper, who at one point jokingly conceded that he suffers from "musical ADD," maintained a relaxed, playful manner, allowing tunes and solos to stretch on as he worked within tight quarters on the keyboard, patiently tracing figures over and over with slight skews and shifts here and there to fashion intricate sketchings of overlain patterns. Other times he shifted from tune to tune, quoting passages—or shadows of passages—from standards in a languorous continuum, as if traversing a dark field of collective memory.

But, always, humor was not far away. Glasper's inter-song banter had the quality of a standup act—and a not unsuccessful one, at that—built largely on Bob Newhart-like backtracking from fantastical claims about such things as his compositional feats (he said he wrote all the material for Michael Jackson's Thriller (Epic, 1982) and Off the Wall (Epic, 1979) albums) and his deep friendship with Herbie Hancock. And, as on his records, Glasper was sure to sneak a couple Hancock tunes ("I Have a Dream" and "Trust Me") into the set. His funny bone also helped him shrug off all the auditory distractions during the set. When the building's emergency exit alarm sounded during his solo opener, the pianist quipped, "See, I set the place on fire." Later, after several grating, metallic slams of the museum's door and what sounded like escaping gas or a coat slowly, noisily drifting off a folding chair, Glasper stopped the music to ask, "Is Cleveland always this damn noisy?" and suggest that soon "a goat's gonna run through here."

But the humor was also in evidence in the music. So much so, that when Glasper emerged from an extended, sailing piano intro on the set's final number before the encore to catch up the strains of Cyndi Lauper's "Time After Time," much of the audience thought he must be joking. But he then proceeded to unweave the beauty of the melody—the better to expose it—and use it to fuel a harried outro that had all the power the trio had earlier harnessed on Nirvana's "Smells Like Teen Spirit."


May 5: TCJF SoundWorks with Benny Golson and Ndugu Chancler

Now in its third year, the JazzFest house band TCJF SoundWorks put together a tribute to Miles Davis and John Coltrane for this free program at the Tri-C Metro Auditorium. Entitled Miles & Trane @ 85 Re-imagined, the show featured inventive arrangements of some of the music associated with these two jazz giants, both of whom would have turned 85 this year. Saxophonist Benny Golson, who grew up with Coltrane, and drummer Leon "Ndugu" Chancler, who played with Davis, served as special guests for the evening. In fact, with TCJF's regular drummer Paul Samuels unavailable for the evening, Chancler sat in for the entire set, working tirelessly behind, or, perhaps, better said—inside—his vertically oriented, enveloping drum set. 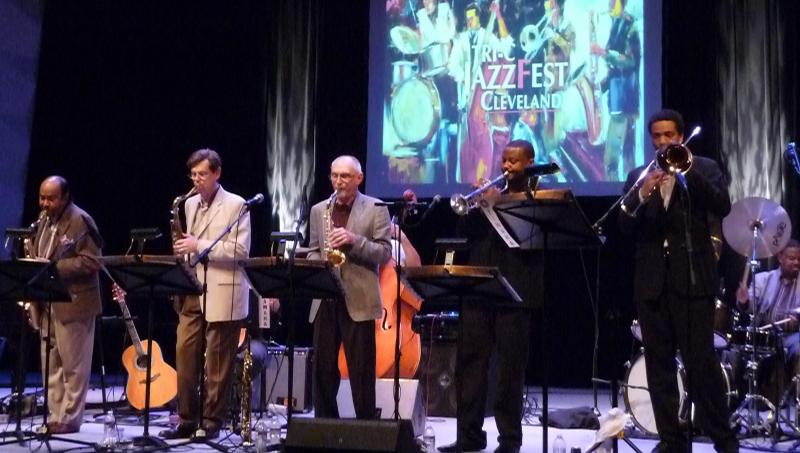 The opening quartet of tunes was for Miles, with striking arrangements of some of his better-known numbers. The octet started with "The Theme," a piece that leader Howie Smith noted was long a show closer for Miles. A not too subtle hint as to the type of topsy-turvy tribute the band intended. "Flamenco Sketches," opened with blues-tinged Spanish guitar from Bob Fraser, who, incidentally, was presented with a Cleveland Jazz Legend award before the show. A propulsive rap-a-tap and thump rose from Chancler and bassist Glenn Holmes, over which Sean Jones sent out militaristic flugelhorn calls that soon fell into the increasingly sad melodies of a Castilian lament. "Boplicity" was rendered as a 1970s-era fusion tune, replete with bright, punching keyboard melodies from Chip Stephens and outer space-way traveling from Fraser on a warped, effects-laden guitar. "In a Silent Way" opened on solo piano, and then steadily fed in the other components, with a brief, yet clear and flute-like statement from Smith's soprano saxophone reaching over Chancler's malleted cymbals to spark bass and trumpet, and then the rest of the band, into a grandly orchestral, cinematic finish.

Golson came on stage for the Coltrane portion of the program—a three-part suite made up of the tunes "Mr. P.C.," Holmes' "A Prayer for John," and "Afro Blue." On that first number, Golson moved from breathy, questioning remarks into thick, full-throated responses. Jones ran and blared through quick glissando, while Fraser and trombonist Chris Anderson offered deep, pointed statements.

The aptly spiritual "Prayer" cut the group to four, with Golson out front of piano, bowed bass and drums. Sounding much like an outtake from—or response to—Coltrane's A Love Supreme (Impulse!, 1964), the piece lifted from Holmes' bass strains and Golson's deep wanderings into a thundering battle between Stephens and Chancler that had the two losing each other in spots, before returning matters to Holmes and Golson in calming duet. "Afro Blue" brought the full band back on stage, but largely featured Chancler, with many harried drum breaks between the melody of horns. TCJF then closed matters with Ron Carter's "Eighty-One," returning to fusion mode—electric bass and keyboards and space guitar. Tenor saxophonist John Klayman worked a solo of descending then ascending steps that Jones soon smoothed out into hard, quickly swooping trumpet lines and Fraser drug through an echoing guitar swamp. Keyboards, bass and drums crashed admirably, then, catching up the others in their spirit till the complete band ran head-on into a brick-wall finish.

As a whole, the evening lived up to its billing, with the inventive re-imaginings of the Miles and Trane music offering interesting, new perspectives, instead of being simply different. The show was recorded, with a CD scheduled for release by the time next year's festival rolls around.

Billed as "Tri-C JamFest," this three-act show stretched out over four hours, giving the local contingent of Jam Nation more than its money's worth. Guitarist Will Bernard hit the stage first, backed by keyboardist John Medeski and drummer Simon Lott. Bernard ran his fat, muddy tone through bluesy groove paces, often augmenting his sound with slide or echoing effects that washed over and slithered between Medeski's skating vamps, until there was the sound of dual guitar lines. As much as outright drumming, Lott used his sticks to scratch loose cutting shivers from his cymbals, and employed a host of crackling, gurgling effect boxes to boot. But the trio left its biggest impression with it most straight-ahead number, a faith-in-the-trodden-dirt rendering of "How Great Thou Art," featuring Medeski's churchy Hammond B-3 and Bernard's high-lonesome, warbling slide guitar. 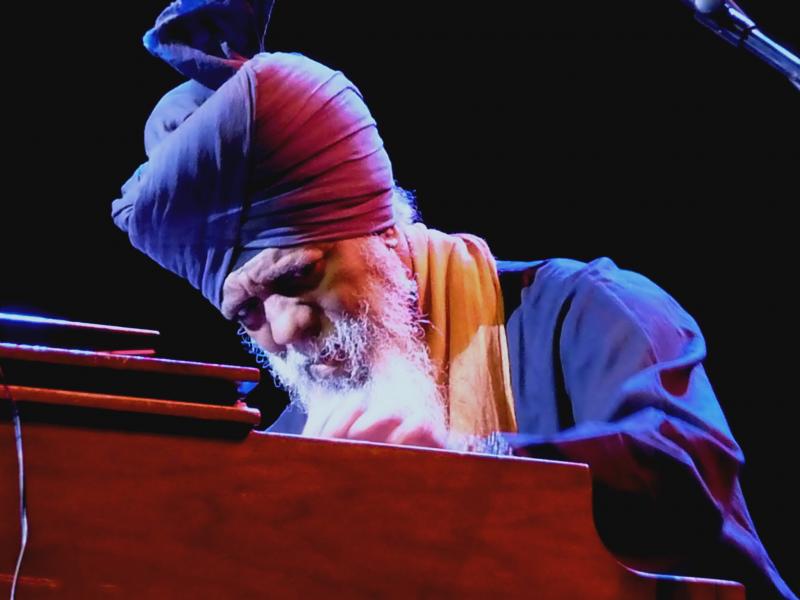 Next came organist Dr. Lonnie Smith, accompanied by guitarist Jonathan Kreisberg and drummer Jamire Williams, who also played on Smith's most recent recording Spiral (Palmetto, 2010). Not unexpectedly, the trio kept largely to that album's music for its set. Smith started off ceremoniously, standing to play his Hammond organ for several minutes as if presiding over an altar. And even after sitting, and throughout the show, he lifted a dramatically contorted hand and conducted the music as if at a high-volume, swirling revival. In such an environment, a gravely whispered pseudo-aphorism like "You know the nature of bees and hives," felt perfectly at home. Still, it was the music that lit souls, as Smith brought his singular brand of organ playing to bear on originals and standards alike, coaxing loose a mystical yet terse and economical cacophony of music that was at once pleasurable and unsettling. Kreisberg's fluent, John McLaughlin-like guitar support and Williams' steady but diverse drum attack sealed the deal.

But the crowd, no doubt, had come primarily to hear king jammers Medeski Martin & Wood. And judging by the host of grooving bodies in the seats, in the aisles and even in the grand opera boxes of the refurbished State Theatre, MMW's fans were feeling every bit of what their boys were layin' down. But after Smith's masterful conduction of jazz ectoplasm along the jammer's electric wire, MMW's show at times felt more like a soundscape grab bag. Scavenger percussionist Billy Martin lifted all manner of rattles, cowbells and whistles from his crate of tricks to augment the drumming on his trap set, and on the idiophonic pieces of metal laid out behind him. Bassist Chris Wood moved effortlessly between heavy funk electric bass, straight-up acoustic bass and every imaginable morphing of the two, at one point even scraping loose with his bow the cries of a dying cow (which is in no manner meant as an insult). For his part, Medeski kept up a steady flow of Hammond organ, piano and keyboard skating, plunking and slashing that gave the band's music its vibrant hum. 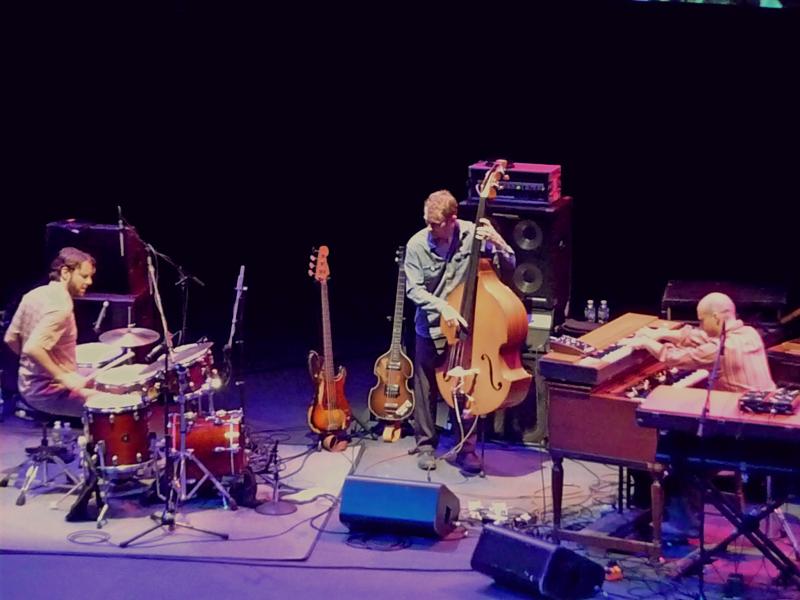 Bernard and Smith joined in on one tune, further fleshing out the highly teased electric groove. And Bernard stuck around for the encore, the appreciative sendoff "F*** You Guys," one of the trio's 20 new tracks written to celebrate its 20th anniversary. But MMW were never more endearing than when they first pranced on stage and when they left it at the close of the scheduled set, wielding tambourine, double-bass and melodica like happy-go-lucky, wandering troubadours.