Alan Hampton is a busy man. When he’s not on the road, playing bass and singing with Andrew Bird, Meshell N’Degeocello, Gretchen Parlato, and Robert Glasper, he might be in the studio, laying down tracks for Sufjan Stevens, Luke Temple, Derrick Hodge, Kendrick Scott, Esperanza Spalding, or The New Pornographers. But somehow, in between tours and takes, Hampton has also been steadily crafting his own sound. When Hampton released his debut record, The Moving Sidewalk, in 2011, The New York Times proclaimed him a musician with “loads of talent.” Now, after three years of touring, recording, and writing, his sophomore album, Origami for the Fire, is scheduled for release on November 4, 2014.

“Before tour started, I went to a studio in Upstate New York with Bill Campbell (drums) and Pete Rende (keyboards) with a lot of half-written songs, and walked out with some nice basic tracks. Then tour began and I snuck in sessions whenever and wherever I could, in London, Los Angeles, New Orleans, Chicago, New York.”

Hampton began his musical career as a jazz bassist in Houston, Texas, where his obvious talents earned him invitations to the renowned High School for the Performing and Visual Arts, then the New School in New York City, and finally a coveted spot at the Thelonious Monk Institute in LA, where he studied bass with jazz Ron Carter, Charlie Haden, and John Clayton and performed internationally with Herbie Hancock, Terence Blanchard and Wayne Shorter.

“It was incredible,” remembers Hampton, “playing music with those legends.”

But Hampton was only getting started. Upon his move back to NYC, bandleaders began taking notice of his voice.

“Clare and the Reasons and Gretchen Parlato had me singing backgrounds at their gigs. The unexpected result was that many of the people who called me to play bass started calling me to sing on their records instead. This eventually gave me the confidence to step out and sing my own songs.”

Hampton’s fluency in various musical genres is evident throughout Origami for the Fire. The opening track, “Every Living Part,” features Hampton’s upper register vocals and a Hammond Organ that calls to mind an old soul record. It’s followed by “Leaf,” an up-tempo two stepper-turned-surf rock by a unique baritone guitar performance courtesy of Ryan Scott. “Lie In It” combines the casual delivery of Paul Simon with the harmony of Jobim and Brian Wilson. Songs like “It’s You” and “Won’t” reveal Hampton’s jazz and R&B influences. In “Keep It In Your Dreams,” Hampton sings from the perspective of a jealous lover over guitars, marimbas, and a hallucinatory string performance by Christina Courtin (coupled with this song is a beautiful stop motion video by Steven Mertens). The last two songs, “Someone Else’s Danger” and “Darker Things,” feature Hampton’s frequent collaborator, Andrew Bird.

“It’s so great to record with musicians you know how to communicate with,” says Hampton. “The close proximity to each other really inspires spontaneity. It makes you play like you would in your living room.” Show less 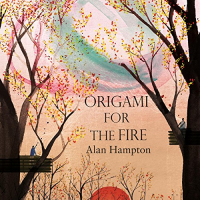 Origami for the Fire

All About Jazz musician pages are maintained by musicians, publicists and trusted members like you. Interested? Tell us why you would like to improve the Alan Hampton musician page.