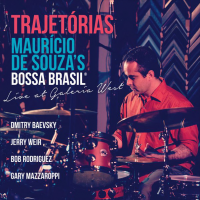 Producer de Souza envelops each live performance in the clear sound of a classic 1970s Creed Taylor CTI Records production: crisp but not cold, detailed but not cluttered, cool but not icy.

No disrespect intended, but vibraphonist Jerry Weir plays so sympathetically with the other musicians in the quartet pieces that keyboards might sound redundant. "Vera Cruz" seems to rise like a mountain through his vibes' sound cloud, and "Chovendo Na Roseira" nestles to rest upon the sonic pillow of the ensembles' harmonized keyboard, saxophone and vibes sound. Vibes lead the way as the band rips through Jobim's "Red Blouse" with jumping and inviting tones. Throughout this set, Weir demonstrates all the funk and finesse of mallet masters Gary Burton and Victor Feldman.

On the subject of masters, alto saxophonist Dmitry Baevsky sweeps and glides through these melodies with Paul Desmond's clear and dry, more sophisticated than smooth martini sound, steering the band's melodic course between Brazilian and jazz music. He's immediately showcased in the opening "Vivo Sonhando" (Jobim), deftly navigating between the sounds of romance and the blues, and slowly unravels Jobim's bossa nova "Fotografia" as if gently awakening it from a nap, painting in the languid, luxurious colors of a Brazilian beach.

Best of all, de Souza proves to be a genuine master of Brazilian and jazz drumming. The leader's drums are the essential force that organizes and drives "Bebê," and after bassist Gary Mazzaroppi completes its encyclopedic round of instrumental solos, de Souza calls "Fotografia" back to order with one simple, masterful stroke. He stretches out "Vera Cruz" to more than twelve minutes with a drum solo that creates from overlapping rolls and counterrhythms a sound and pulse which rise like a ghost over the bandstand. Just like the leader's playing, if not the entire ensemble's, Trajetórias is a quiet, understated masterpiece that exponentially rewards repeated listens.