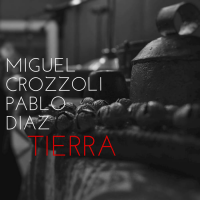 There is a poem by the Swedish poet Gunnar Ekelöf (1907-1968) called "Den svarte bilden" (The black image) in which he tells about an icon whose image is kissed away. It is a spiritual act of love where the image of representation is transgressed.

Interestingly, Ekelöf's poem could be an illustration of what is going on in the meeting between drummer Pablo Díaz and saxophonist Miguel Crozzoli . As a part of the session for their album Tierra, Diaz brought pictures of the musical icons Abbey Lincoln, Billie Holiday and David S. Ware to inspire them, but instead of recreating their musical image, they kiss it away with their sound, which is both an homage to the jazz tradition and a transgression of it. One is reminded of the great sax and drums dialogues between John Coltrane and Rashied Ali and Fred Anderson and Hamid Drake, but Díaz and Crozzoli are entering their own poetic landscape of sound that is described in the poem that accompanies the release. For instance, it says: "Earth of every-self of no-self reaching open infinite, / communicating emotions."

Emotional communication is the keyword when it comes to this release, but it is not just the sound of two persons, but rather the beating heart of nature. It is the sound of blood flowing in veins and water following the restless patterns of the river. Tribal rhythms, wind chimes and soft secrets whispered on cymbals and the howling wind communicating through a saxophone that at times sounds like a bamboo flute. There are both dances and abstract rhythms, chants and soft cries of joy and sorrow.

Both Díaz and Crozzoli are connected to the bourgeoning jazz scene in Buenos Aires and have been actively involved with the noteworthy Kuai label. However, recently they have decided to start their own NendoDangoRecords together with the acclaimed pianist and composer, Paula Shocron. Tierra is the second release on the label and very different from the highly advanced theoretical framework of Crozzoli's recommendable release Ciclos De Estrellas. However, what the two records have in common is a spiritual and philosophical approach to making music.