Josh Berman & His Gang: There Now 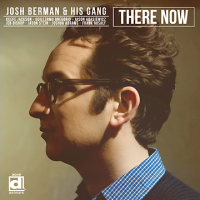 Josh Berman is a gambler. There Now initially gives the impression that the cornetist's reversion to the music of Eddie Condon and Pee Wee Russell is only a bluff. His gang of young Chicago improvisers weaves in and out of the 1920s, inserting free jazz passages and improvised duos that could not be anticipated in the early part of 20th century.

On There Now, it is as if he raises the musical ante with, "I call your Lincoln City, and raise you an Art Ensemble Of Chicago."

Like his prior offering, the quintet-driven Old Idea (Delmark, 2009), or vibraphonist Jason Adasiewicz' Rolldown ensemble and Keefe Jackson's Project Project, this inspiring and imaginative band meshes tradition (with a small "t") with innovation.

Berman's octet covers five early jazz standards (and three of his own tunes), not unlike the forays of early New York Downtown artists of the 1980s and '90s, except their DIY punk attitude (we barely know the songs and are learning to play the instruments) is supplanted by stellar musicianship. Eric Dolphy-quoting bass clarinetist Jason Stein opens the 1930s hit "Love Is Just Around the Corner," before the band weaves the melody into both an old-styled and very modern Chicago sound. And why not sing an old tune with a contemporary accent? After all, Louis Armstrong left New Orleans (and King Oliver's sound) for Chicago and New York.

Berman, clarinetist Guillermo Gregorio and trombonist Jeb Bishop all reach back to that early jazz sound, not to ignore Keefe Jackson's nod to Coleman Hawkins. The language is early jazz, but that is only the starting place. Berman's "One Train May Hide Another" may allude to the light at the end of the tunnel (could it be a train coming?), with Adasiewicz's slow, dancing vibraphone giving way to a freer section. Didn't see that coming? They bring it all back together in the end. Likewise, other pieces trade off early for modern, and free for orchestrated harmonies. All brilliant and a firm invitation to go all-in on this wager.

Love Is Just Around the Corner; Sugar; One Train May Hide Another; Cloudy; Jada; Liza; I've Found a New Baby; Mobile and Blues.