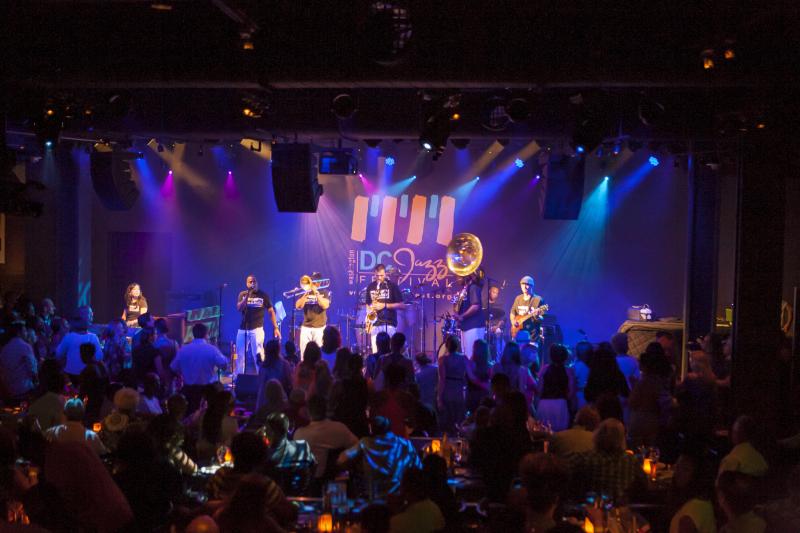 With the summer heat descending on the nation's capital, the city transforms, its southern personality asserting itself. Ties loosen, linen suits make their first appearance, people mosey instead of dash, and the beats of jazz reverberate from venue after venue as the city welcomes the annual DC Jazz Festival with open arms.

Celebrating the vibrant past, present, and future of DC's music scene, the 2012 festival once again put forth an expansive array of music, including everything from big-name vocalists, to big bands, to the more obscure avant-garde. Now in its eighth year, the festival has become an entrenched Washington institution. It has an established structure that blends new and familiar performers as well as a successful track record of delivering a mix of styles and genres designed to appeal to a variety of audiences. The festival also has become large enough that its pattern of recycling performers from previous years has converted a downside into a positive. Since it is now impossible to see everything worth seeing in just one round, if you miss something one year, there's a chance you'll get a second bite at the apple the next.

The 2012 festival once again boasted an impressive series of headline acts, the majority of which were presented at the Hamilton, a new, upscale venue on the scene. Performers included pianists Randy Weston and Monty Alexander, festival stalwart, trumpeter Roy Hargrove, and guitarist John Scofield. Singer Diane Reeves also performed at the Howard Theater, while the Jazz in the 'Hood series filled the city's clubs and restaurants with a plethora of additional acts, including many local artists.

In keeping with founder Charlie Fishman's focus on education, the festival continued to offer the Jazz 'n Families series, hosted by the Phillips Collection. This innovative program offers two full days of music for families, giving parents and children an opportunity to listen and learn during the daylight hours. At the opposite end of the spectrum, the festival united with Capitol Bop for the second year to present late night concerts by cutting edge voices of modern jazz, including, pianist Marc Cary, Tarbaby and saxophonist Elijah Jamal Balbed. Expanded this year to include an all day and night mega-concert, the Capitol Bop Loft Series is fast becoming one of the festival's central attractions.

The festival also partnered with the Kennedy Center, which hosted a series on its free Millennium Stage as well as what has become a cornerstone of the festival, a performance by the festival's artistic advisor, saxophonist/clarinetist Paquito D'Rivera. Dubbed "Jazz Meets the Classics," this year's program featured both the Classical Jazz Quartet and Paquito D'Rivera Sextet for an evening devoted to blending jazz and classical music. While not as successful as his 2010 Jelly Roll Morton Latin Tinge Project, D'Rivera, with the help of arranger Michael Phillip Mossman, delved into the classical tradition of Bach, Chopin, and Mozart, infusing each with his inimitable sense of humor, Latin rhythms, and intellectual prowess. The sextet opened with two pieces by Chopin, "Fantaisie Impromptu" and "Prelude in E minor," giving both airy island rhythms while sustaining Chopin's singular melancholic color and lushness of development underneath. After a rendition of Mozart's Magic Flute on clarinet, the group turned to the Adagio from Mozart's Clarinet Concerto, coyly converting the original into a Dixieland blues driven by Alex Brown's excellent piano work. After a sojourn with Beethoven, the band then closed out the set with two Bach compositions, both of which aptly manipulated Bach's precise structures-inverting and twisting the lines while maintaining their core sense of organization and clarity. As with everything D'Rivera touches, the overall result of the set was simultaneously full of vibrant, positive energy, musically challenging, and deftly crafted. 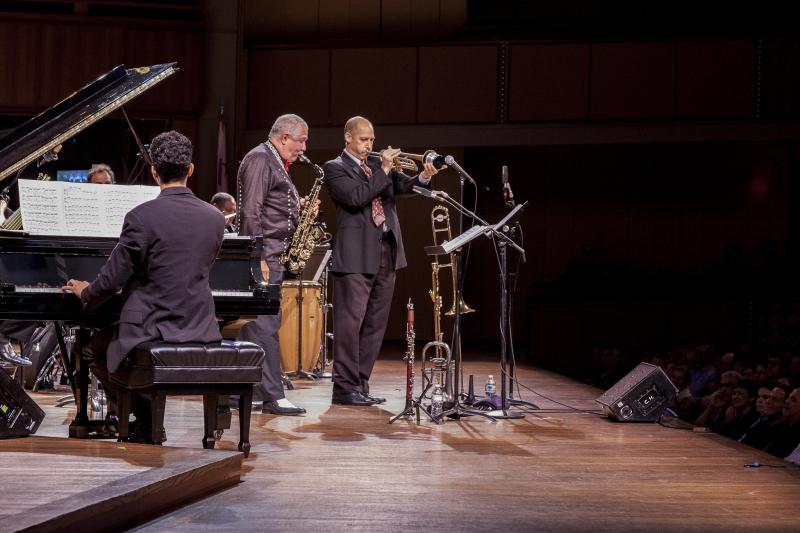 The music was then briefly put on pause to present a series of annual awards. Both pianist Kenny Barron and bassist Ron Carter were honored for their lifetime contributions to the music. The Washington Post and local club owner Omrao Brown, whose Bohemian Caverns continued as a hub for the festival's club series, received awards in turn for their work to promote jazz. The night then proceeded with the Classical Jazz Quartet, as it delved into a series of classical and jazz compositions, delivering a quite different approach than the sextet's. Intriguingly, Bach once again dominated the classical works, the group applying its stately voice to the master composer's visions.

The festival expanded to a number of new venues in 2012, including linking with the Atlas Theater's newly minted jazz series to showcase saxophonist Mark Turner's Quartet, which turned out to be both a highlight and an example of the diversity that makes up the festival. Joined by trumpeter Ambrose Akinmusire, bassist Joe Martin and drummer Marcus Gilmore, Turner led the audience on an excursion into the sober terrain that is his hallmark. The quartet delivered an expertly paced set, with all four members blending their voices seamlessly. Particularly intriguing was the tune "Sonnet for Stevie," on which Turner and Akinmusire alternately interwove and interlocked their horn lines to shape elaborate formations evoking wind-carved rocks and valleys. Equally compelling was "Brother-Sister II," where the two players evolved lush horn lines and elongated solos that floated together like sea creatures dancing in the deep dark expanses, illuminated intermittently by the flare of their own phosphorescence. Throughout the night, Turner delivered far-ranging solos, which, though coiling out into the stratosphere, often returned to a similar cool, calm center, giving his work a sense of continuity and gravity. A deliberate composer and player, Turner's music evokes epochal time spans and continuities that unfold over vast distances, emotional landscapes that can only be formed by the erosion of time and an introspective mind. 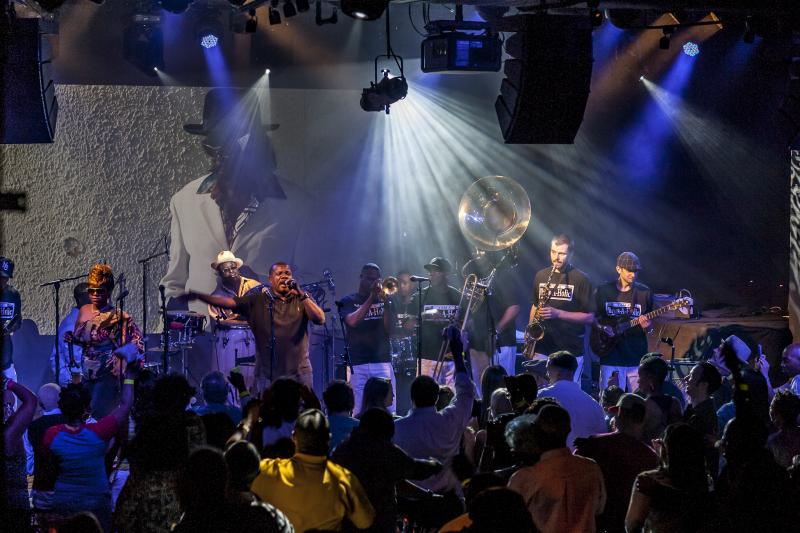 As is often the case, it was the unplanned moment that became this year's signature event. Sadly, just before the festival opened, DC innovator Chuck Brown, the "Godfather of Go-Go," passed away. In a burst of inspiration, festival organizers were able to mount a moving memorial concert to this beloved DC figure, featuring New Orleans phenomenon Brass-a- Holics, united with several guest artists.

Accepted as the founder of the Go-Go funk subgenre, guitarist/vocalist Brown was a local legend who inspired a homegrown musical phenomenon that defined Washington, DC's club scene for decades. A blend of funk, rock, Gospel, big band, and hip hop, Go-Go concerts were know for long nights, riotous rhythms, a unique aesthetic, and loyal fans. It also turns out that Go-Go's influence may be more widespread than often acknowledged; a fact underscored by Winston Turner, front man for the Brass-a-Holics. Speaking about the Brass-a-Holics' own genre blending style when they appeared at the festival the previous year, Turner explained that at heart the rhythms and call-and-response structures of Go-Go are closely related to the fundamental structures of New Orleans jazz. That, he added was why he felt such a strong connection to DC and was proud to be invited to play the festival.

That pride and connection was clearly evident when Brass-a-Holics took the Hamilton stage for the demanding task of performing a memorial concert to a dominantly DC audience. Showing no hesitation, the band launched immediately into a series of its patented style-bending tunes. After a rousing version of the original "I Had a Good Night" and an extended battle of horns, the notoriously staid DC audience was clapping and shouting in its seats. A few moments more of the band's forceful drums, blasting horns, driving keyboards, and rollicking vocals and the crowd was on its feet. But for incorrigible showmen like Turner and his band mates, that was not enough. Expertly working the crowd, Turner used call-and-response to foster still more engagement, showing great humor with his banter. The band then turned out a genuinely rousing mix of funk beats, hip-hop inflections, and old-fashioned New Orleans brass lines, refusing to stop until it had the audience dancing between the tables and at the front of the stage.

By the time Brass-a-Holics concluded a boisterous take on "O.P.P.," hardly a seat was still occupied. The band then stepped back and began the culmination of its opening set, a jazz funeral march for Brown. Starting with a heartfelt statement by Turner, explaining that the band wanted to do something special for veteran performer, he narrated a detailed description of how a New Orleans funeral proceeds for the crowd. As he described the funeral service, the traditional parade, and the history behind the music, the band members slowly began to play, marching through the crowd. Together, the group then initiated a musical eulogy for Brown that built from a slow march and an uplifting rendition of the traditional New Orleans funeral frontline to a medley of funk-themed tunes, all transformed into a Go-Go- inspired tribute befitting the musical legacy of Chuck Brown and the endless party he inspired.

Just when it seemed the energy level couldn't get any higher, Turner next welcomed a gathering of guest artists who had performed with Brown over the years to the stage, including Gregory "Sugar Bear" Elliott, and Milton "Go Go Mickey" Freeman. Already on their feet and dancing, the crowd proceeded to go truly wild as the band played tune after tune drawn from Brown's repertoire, including "We the People," "Blow Your Whistle," and many more. With the aid of Freeman and Elliot, the show poured forth distilled attitude and 150-proof entertainment until the entire room was on its feet, pressing forward toward the stage. In the end, no seat was still occupied and audience members from every age group, color, class, and background were dancing together as the band played on throughout the night. It would be hard to imagine a more appropriate way to honor Chuck Brown. 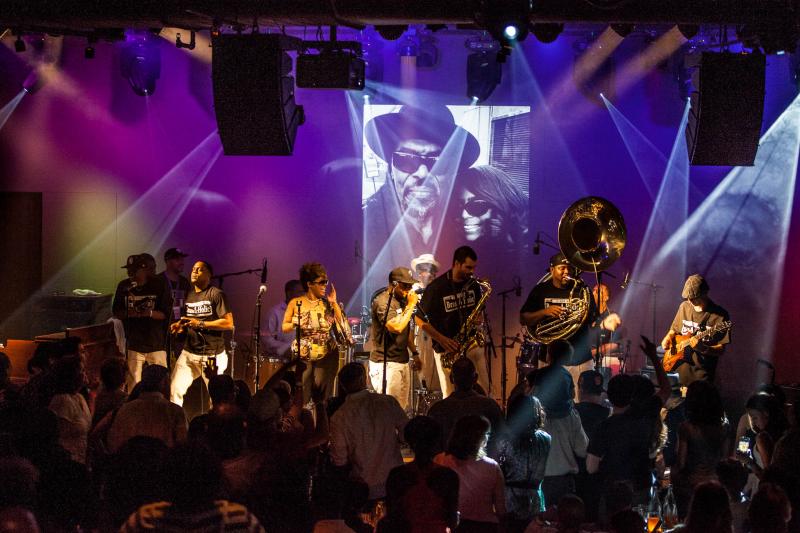 In keeping with the its track record, the 2012 DC Jazz Festival offered plenty of diversity and continued to expand its reach into the city's clubs and many performance spaces. Once again it maintained a focus on jazz, in contrast to many other festivals, and succeeded in delivering a fair number of surprises over the course of its nearly two-week run. Most importantly, however, the festival continued to ground itself in a sense of community and openness that is one of its distinctive hallmarks. Never too big to shine a light on a local artist or to honor a local hero like Chuck Brown, the DC Festival makes sure that, even as it brings in ever more voices from outside the city, it remains true to its name.