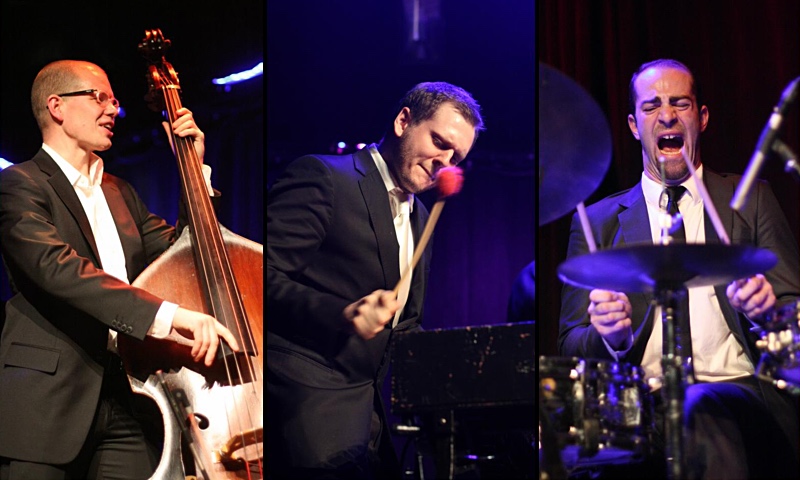 BY GENO THACKARA
January 27, 2017
Sign in to view read count

...the public just says you need to make a record every year 'cause you need to have something new and current. I'd rather spend two years developing and being sincere about what we're creating.
—Jared Schonig

Don't be fooled by the name. The members of The Wee Trio are normal-looking and normal-sized guys, their ambition if anything is deluxe, and their compositional scope virtually limitless. While such a moniker can only keep them humble—not that they'd seem to need the help—they've always kept an outsized willingness to follow fascinating ideas and embrace the unexpected. Picture Al Pacino's sneaky lawyer in The Devil's Advocate explaining his unassuming appearance: "I'm the little guy. They don't see me comin.'" Past the friendly exterior, the multifaceted (and even more friendly) depth of the Trio's music sneaks up on you in much the same way.

The three drifted together from the Pacific coast, the American midwest and the Delta south, eventually all ending up in Brooklyn. Bassist Daniel Loomis and drummer Jared Schonig quickly hit it off after meeting at New York's Eastman School of Music in 2008 and immediately felt something click. Their interest was piqued—and their future path unknowingly further cemented—the day they happened to see a stranger wheeling a vibraphone down the sidewalk, who turned out to be a neighbor across the street. Going over and saying hello to James Westfall made (to switch films for a moment) the beginning of a beautiful friendship.

Juxtaposing odds and ends has been one of the Wee Trio's key strengths ever since they kicked off their remarkably assured debut with a Nirvana cover and threw in a tribute to Harry Potter. The restlessness and go-for-it attitude renders the cuteness of their name (and any respect for arbitrary musical boundaries) a bit of a joke. The light airy tone of vibes can get unexpectedly aggressive shadings from Westfall's brash mallet work, making an infectious complement to Loomis's often-percussive bass and the rock-and-roll energy of Schonig's drums. They definitely live under the jazz umbrella, but it's a mix that turns out widely accessible to open-eared listeners from other quite different camps.

Taking a break to chat from New York City before 2017's first mini-run of dates (the kind that's more a long weekend jaunt than an actual tour), Schonig sounds stoked to be expanding the sonic palette with some new players. "We did that a lot recently," he tells me. "We did a string this past fall where we played with different guest artists around the country—we played in L.A. with a great pianist out there called Josh Nelson, who guested on all the piano material that's on the record. Then we went to Chicago and played with a couple local guys, a great pianist named Reggie Thomas and great saxophonist, Geof Bradfield."

The presence of guests is the theme behind September's release Wee +3 (Bionic Records, 2016), which was a shift both surprising and perfectly logical for a group determined not to tread water. After beginning with a pair of complementary but different studio records, 2012 saw them making an unexpected (not least to themselves) left turn by paying eloquent homage to a master of unexpected left turns. Ashes to Ashes: A David Bowie Intraspective (Bionic, 2012) was a fresh batch of rock-goes-jazz reinventions as audaciously inventive as its subject. To change gears again, the following year made an opportunity to stop at a favorite venue in Loomis's hometown of St. Louis for the cooking-hot Live at the Bistro (Bionic, 2013), their purest jazz recording yet.

The next idea was to give the recipe a jolt of new flavors: Wee +3 is so named because it features three good friends sitting in with the band on three tracks each. Schonig explains, "we'd been writing this material and discussing who we wanted for this project for a while—at least a year, two years, till we finally got it. And then we actually recorded it at the end of 2015, I think, then it didn't come out until late 2016. Sometimes things just take longer. We finally got to do it in the studio we wanted to do it in, with the engineer we wanted, and the timing was also perfect with [trumpeter] Nicholas Payton because he lives in New Orleans."

Fabian Almazan dashes off plenty of fiery piano licks on the recording, but the most hot and heavy contribution comes courtesy of Nir Felder, whose guitar helps deliver on the rocking energy the Trio has always hinted at with their very un-rock-like instrumentation. New songs were composed with each of those voices and personalities in mind, and presenting the material onstage has been opening up all kinds of other tonal possibilities as well.

"Our first foray into having a different instrument was with Geof," Schonig recalls. "He played some of the guitar material and some of the trumpet material and it was really, really killing. So we realized that the tunes kind of stood on their own, even though they were written for these specific people for the record and for those instruments. We realized they could work with different instruments and different people, which brought it to other places. ... We're having fun doing this material with extra players. We love playing as a trio, obviously, but it's a little extra icing on the cake to do it with someone else." He describes the band's excitement looking forward to the East Coast dates, which are set to include Almazán performing 'his' songs and others, different trumpet shadings from Eli Asher and Marcus Printup, and guitar tones by Matt Stevens.

"We're definitely recording it and making videos of the gigs, so we'll have some new film to put out there for sure," he promises. "In this day and age, people want the videos." Besides making an interesting way to keep fans engaged, it's an unmistakable sign of the times—as any musician (especially in the jazz world) will tell you, the logistics aren't getting any less complicated in the digital age.

"We still do well selling CDs on the road, but the online thing, it's drastically changed things in a monetary way," Schonig says. "You can only get so many thousandth-of-a-cent payments from Spotify and stuff. But when people come to gigs, they like to take something home with them. I've found that, mostly, jazz fans are still the ones that actually buy and listen to CDs, whereas kids who are listening to pop or electronic music or whatever, they're more stream-based."

Aha. Kids these days, am I right? "It's funny—I think music means something different to today's generation," Schonig muses, not unaware of how such sentiments must sound. "To my generation or the one before, it was more important. Now it's all easily accessible. I'm in my early 30s, and the whole aspect of going to the record store, the Tower Records, to buy CDs, was what I looked forward to every single weekend. Now kids don't have that. They can already have whatever they want instantaneously. It doesn't mean as much—that's how I perceive it. I do a lot of teaching, and that's basically what kids are saying to me."

I optimistically mention trusting in music's power to keep opening new ears—hey, we all had our own little awakenings at some point, didn't we?—but he can't help being skeptical how much it's reaching the youngsters out there. "I guess college kids are maybe the youngest," he says about the Wee Trio's own audiences. "They're usually musicians, music majors and not music fans. The live shows are definitely it, though—that's why we do it."

They may only manage brief strings of shows here and there, juggling any dates with teaching and other jobs to keep food on the table (Westfall occasionally manages a solo recording, for instance), but it's worth it to enable the right ideas to come in their own time. They want to enjoy the fruits of Wee +3 while this phase lasts, but still find the right time to eventually let the next endeavor take shape.

"We've had more talks about what direction we want to go for our next project," he hints vaguely. "There's been talk of maybe doing something with a vocalist; there's been talk of doing a big-band record or large-ensemble music. We've already adapted a lot of our music for a typical large jazz ensemble, and we do that with different college and high-school bands across the country. So that's a lot of people playing our music. We've had a lot of ideas, but we're enjoying touring this stuff a lot. We want to get the most mileage out of it, even though we also need to start with something new soon 'cause we want to keep creating."

There's no knowing just where that spot in between will be, only that it's still too soon to tell. "Personally for me," Schonig says, "I hate it when artists just release records every year no matter what, even if they're not quite into whatever the next project is, but the public just says you need to make a record every year 'cause you need to have something new and current. I'd rather spend two years developing and actually being sincere about what we're creating."

The next big idea could be one of those above things, or it could be something nobody's even thought of yet—after all, the rhythm guys didn't envision a Bowie homage either until Westfall sold them on the idea. Whatever the case, it'll undoubtedly be some exercise in discovering the wide possibilities available with vibes, bass, drums and a hearty sense of adventure.

And a fitting reward for those willing to be patient for another year or two down the road? "Yes!" he laughs. "Yeah, it'll be worth the wait for sure."