Results for "The Wee Trio"

The Wee Trio is a collaborative musical exploration consisting of vibraphonist James Westfall, bassist Dan Loomis, and drummer Jared Schonig. In what started as a regular collective of Brooklyn musicians who got together to jam, chemistry quickly formed and thus was born The Wee Trio. The band kicked off their inaugural tour performing throughout New York and Pennsylvania playing at a few clubs, a Jazz Festival, and an Artist Residency at a local University. The band reconvened back in Brooklyn to record and document the trio. The documented recording entitled Capital Diner Vol. 1 features original compositions by the trio with a few standards composed by Kurt Cobain, Sufjan Stevens, and Thelonious Monk

With more than a decade of performing experience since moving to New York City in 2007, Dan Loomis has emerged as a daring leader, a sought-after sideman, and a composer whose view of the world – and willingness to explore his own inner questioning – has led to the creation of innovative and moving works. Loomis has produced nearly a dozen recordings with the Dan Loomis Quartet and with bands he co- leads, including the collectives SPOKE and The Wee Trio. The latter two bands have released critically acclaimed albums in recent years, including SPOKE’s (r)anthems in 2014, and The Wee Trio’s concert recording Wee+3 in 2017

Don't be fooled by the name. The members of the Wee Trio are normal-looking and normal-sized guys, their ambition if anything is deluxe, and their compositional scope virtually limitless. While such a moniker can only keep them humble--not that they'd seem to need the help--they've always kept an outsized willingness to follow fascinating ideas and embrace ...

We took our top lists, found the common recordings, added a dozen of my personal faves, and presented them here for your viewing pleasure. Enjoy, and feel free to post your 2016 favorites in the comments section below. Wadada Leo SmithAmerica's National ParksCuneiform Records Michael Formanek

By The Wee Trio

The Wee Trio Announces The Release Of Wee + 3, Plus Upcoming Tour Dates! 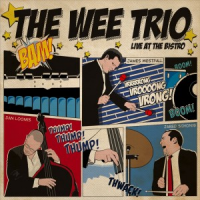 Live at the Bistro

By The Wee Trio

The Wee Trio: Live at the Bistro