By Mark Corroto
November 16, 2014
Sign in to view read count 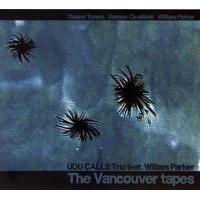 The Vancouver Tapes might have been called The Lost Recordings had drummer Tiziano Tononi not found this recording at the bottom of a chest he stored it in after his appearance with saxophonist Daniele Cavallanti and bassist William Parker. It was their first ever meeting at the 1999 Vancouver Jazz Festival.

The instant the trio hits the stage the upsurge of energy is palpable. Nay flute, bells, and the dynamo of Parker's bass ignites the two lengthy sets. While the Milanese musicians Cavallanti and Tononi were long time collaborators, recording the original duo Udu Calls (Splasc(h), 1996), in tribute bands to Rahsaan Roland Kirk, Don Cherry, and Ornette Coleman, and as members of the Italian Instabile Orchestra, this is their first meeting with the heavyweight champion of New York's free jazz scene.

While the three would reunite for Spirits Up Above (Splasc(h), 2006), this recording, although troubled by less than perfect sound, is a rare treasure.

Parker's bass inspires the Italians to reach back into the the New York scene that produced the music of Frank Lowe, Albert Ayler, and Marion Brown. Add to that Parker's association with David S. Ware, and the table was set for some fireworks. Cavallanti has covered several Ayler compositions on his discs; here he freely quotes from the Holy Ghost's repertoire. Such is the attraction of this trio. They glide between marches, frenetic passages, nursery rhymes, and graceful interactions without fragmentation. Credit Tononi's inexhaustible supply of percussive devices. He is in constant conversation with Cavallanti and Parker, prodding sounds, rousing flights, and stirring the freedom pot. If this music doesn't move you, then as they say, "Jack, your dead."