By MARK CORROTO
November 18, 2017
Sign in to view read count 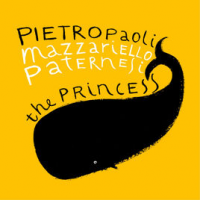 It can be risky for jazz musicians to play pop songs. They have to navigate the memories that each composition holds for the listener while also making the music distinctive and personal. Miles Davis could do it with Michael Jackson's "Human Nature" and Cyndi Lauper's "Time After Time," and of course Sonny Rollins can make any popular song his own. Add to that list, Enzo Pietropaoli. The bassist has been exploring popular music with his quartet, which has released three volumes of Yatra (Via Vento Jazz). Here he gets more intimate with a piano trio session, performing mostly slow tempos and meditative pieces.

His trio has the same lineup as the Yatra quartet, minus trumpeter Fulvio Sigurta. It comprises pianist Julian Mazzariello, drummer Alessandro Paternesi, and Pietropaoli on double bass. The seven covers and three original tracks on The Princess invite a type of nostalgia, not for the way it was, but for the sense of possibility those particular songs spurred in us when we heard the originals. Take Brian Wilson's "God Only Knows." Played at an achingly decelerated pace, the trio teases out the unsung lyric to great effect, making the Beach Boys into the most romantic band ever. Not your era? Eddie Vedder of Pearl Jam wrote "The End," and the trio performs it with the same magic. The formula is consistent here. Pietropaoli has a knack for diving deeper into pop music to reawaken the message. Bob Dylan's warning call "A Hard Rain's Gonna Fall" is reiterated with Mazzariello's very simple piano lines and Paternesi's brushes. Where an act like The Bad Plus tends toward the overelaborate cover song, this trio favors the understated. Even when they travel back to 1932 for Cole Porter's "Night And Day," there is no hint of saccharine. Just the most gentle swing. Of the three Pietropaoli originals, "Supereroa" is the one composition that reroutes the trio into an up-tempo (think Ahmad Jamal) swing. The title track opens with a bass solo, before walking the same territory as the cover tunes. It's begging for someone (anyone?) to write some lyrics.