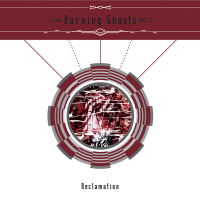 Reclamation is Burning Ghosts second album and first for John Zorn's Tzadik label. Based in Los Angeles, the band's fire and brimstone-like overtures are seated in doom metal-jazz along with renegade fuzoid bop movements. The musicians dole out sheets of torrential soundwaves via fluently enacted unison runs and booming cadenzas that spark a tidal wave of fun factors on a recurring basis.

"Betrayal" is a multidimensional gala, launched by bassist Richard Giddens' fervent strumming and drummer Aaron McLendon's cymbals-based tonal shadings, used as an entry point for Rosenboom and Vossler's dark voicings. Indeed, you get the sense that some sort of menacing event is about to occur. But add crashing drums and odd-metered phrasings into the mix and the chameleon changes color so to speak as the trumpeter's oscillating notes, coupled with the drummer's pumping backbeats raise the bar a few notches. Hence, the door opens for the soloists' ferocious improvisational metrics atop a grinding rock riff as Rosenboom and Vossler go for broke by reeking a bit of havoc towards the finale. Hence, it's just a 5 ½ minute glimpse into a presentation that imparts a bit of shock therapy amid the group's transparent and rather seamless merger of hard rock and progressive metal with cutting-edge modern jazz principles. (Feverishly recommended...)