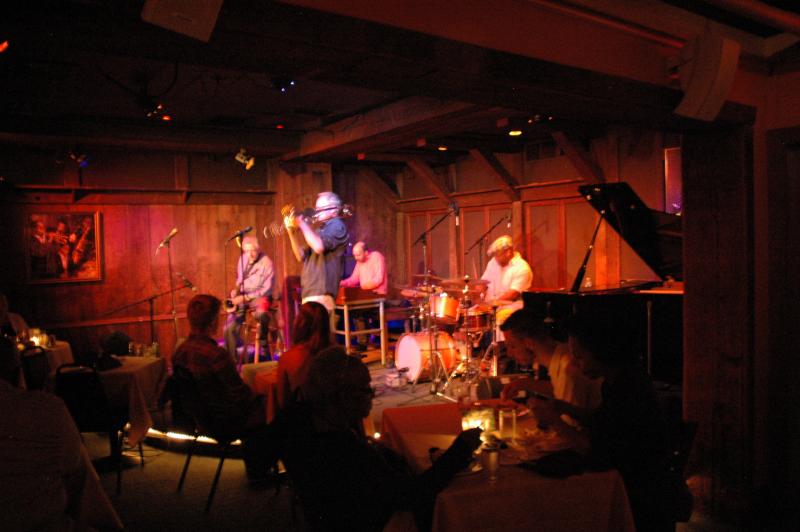 BY VICTOR L. SCHERMER
September 1, 2015
Sign in to view read count
The Larry McKenna and John Swana Organ Quartet
Chris' Jazz Café
Philadelphia, PA
This end-of-summer set at Chris' Jazz Café in downtown Philadelphia brought together four long-time Philly musicians with the idea of pairing John Swana's valve trombone with the rich sounds of a Hammond organ, something which Swana has been doing recently with various combos and venues in the area. A few years ago, due to a lip problem, Swana traded in his legendary trumpet for a valve trombone, for which he has a great embouchure and is quickly becoming a master on the instrument. This sophisticated but swinging show was thus built around the sounds of Swana and organist Lucas Brown on the Hammond XK3, a travelworthy lightweight compared to the Hammond B-3, but which, in Brown's capable hands, produces stunning sonorities all its own. Former Woody Herman tenor saxophonist Larry McKenna served as the hosting band leader, but modestly positioned himself to the far left, giving center stage to Swana. Webb Thomas, drummer of nightclub Zanzibar Blue fame who is intimately familiar with organ groups, provided a bruising rhythmic backup which we have come to expect in conjunction with the organ's piping hot sounds. The result was a mix of power and precision, with the latter receiving top priority.

The set began with "It Could Happen to You," a great tune for improvising, giving McKenna and Swana a chance to synchronize their unique lines, McKenna coming from the swing and bebop eras and Swana deriving from hard bop and cool jazz influences. There was a nice shift of feel between their alternating solos, and Swana seemed to be channeling the great valve trombonist Bob Brookmeyer's unbearable lightness of swing that provided a soft cushion for his brilliant improvising. Swana's careful constructions were a fine follow-up to Brookmeyer's approach rather than an imitiation.

The group moved into a slightly faster tempo with Benny Carter's "A Walkin' Thing," which, as the title suggests, has a rhythmic emphasis and which, on Carter's album Jazz Giant (Contemporary, 1958) featured Frank Rosolino on slide trombone. The rhythm section came on strong for this one, with Brown comping the bass line and Thomas providing a marching band-like intensity that provided a contrast to Swana's careful and concentrated attention to the tune and its harmonic structure somewhat in the manner of a baroque composer.

The most upbeat number in the set was "It's You or No One," with McKenna coming on like Dexter Gordon, whose version of this tune was always a showstopper. The group gave Lucas Brown lots of room for an extended solo, and it was a real pleasure and relief to hear organ stylings that emphasize artistic creation rather than making the organ sound like an amplified rock band. Not to diminish the amazing work of Philly organ legends like Jimmy Smith, Trudy Pitts and Joey DeFrancesco, Brown manages to make excitement by remaining cool and subdued, playing the right notes at the right time with the right sonority.

The by now ancient ballad "Laura" was on this occasion given renewed haunting beauty as Swana evocatively stated the melody with McKenna doing the reprise. Swana's flawless sound on this contemplative song notably reflected his experience as a trumpet player, full yet clear as a bell. Then, as he and McKenna improvised, Brown provided a stunning backdrop, a tonal "cloud" surrounding the horns, that gave additional meaning to the song, which is from the film noir soundtrack about the seductive woman played by Gene Tierney in the 1944 Otto Preminger classic, Laura, who "is only a dream." The set concluded with Jobim's "So Danca Samba," with Swana and especially McKenna delivering solos that reflected both West Coast and Brazilian influences and would have made Tom Jobim very happy. McKenna, who usually sticks to American Songbook standards, is surprisingly one of the best interpreters of Jobim and could be favorably compared to Stan Getz in that respect.

The excitement of this group was subdued, but generated the combination of tension and ease that makes for a great show. These are musicians who are looking to make a statement rather than a splash, and we need more of them today.

Set List: It Could Happen to You; A Walkin' Thing; It's You or No One; Laura; So Danca Samba.