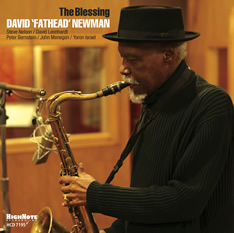 What an apt name The Blessing is for David Newman's final recording before his death ended a long career last January (2009). He played for more than a decade with Ray Charles and alongside Herbie Mann, Aretha Franklin and Roy Ayers, among many others. For this last studio session he was in fine form. A Milt Jackson gem, "SKJ," is the set's opener, Steve Nelson's vibes providing glowing cascades before Newman swings in with a solo as brief in its measured warmth as it is satisfying. Here too and throughout the set Peter Bernstein's guitar is vigorous in a style that is direct as it mixes blues and bebop.

In Newman's blues-drenched take on Gershwin's "Someone To Watch Over Me" (which in moments has echoes of Duke Ellington's "In A Sentimental Mood"), again there is a dazzling display of colors and tones. He begins with a statement of the original tune, albeit with little turns, pauses and a warm, floating, utterly romantic sound. Nelson is always there with just the subtlest echoes of the melody. Newman's tenor saxophone is as gentle as it is full-bodied, with nary a superfluous embellishment. David Leonhardt's piano solo leads perfectly into Newman's bridge and the final bars.

It must be noted that Newman's brand of romanticism is never mushy or sentimental. His version of "As Times Goes By" is abetted by the brisk, crystal warmth of Nelson's vibes on the bridge. Newman is authoritative and yet relaxed and it segues into "Manha de Carnival," on which his sax, Nelson's vibes and Leonhardt's piano effect a subtle tension by both anticipating and playing after the beat.

It is Leonhardt's own composition, "Romantic Night," that showcases Newman at a peak on the recording and brings out the best from all hands. Shifting between major and minor modes, it's a beautifully structured performance. Newman gives a textbook example of a veteran player who swings easily as he makes it feel so good, yet without ever allowing things to get too cozy. The closer is the title track, Newman's own tune, this time with him on flute. It's a gospel-tinged piece that closes the set on a funky, upbeat note. As with all of Newman's music, this piece could as aptly have been called "a gift."

SKJ; Someone To Watch Over Me; As Time Goes By; Manha de Carnival; Smile; Romantic Night; Chelsea Bridge; Whispers of Contentment; The Blessing.