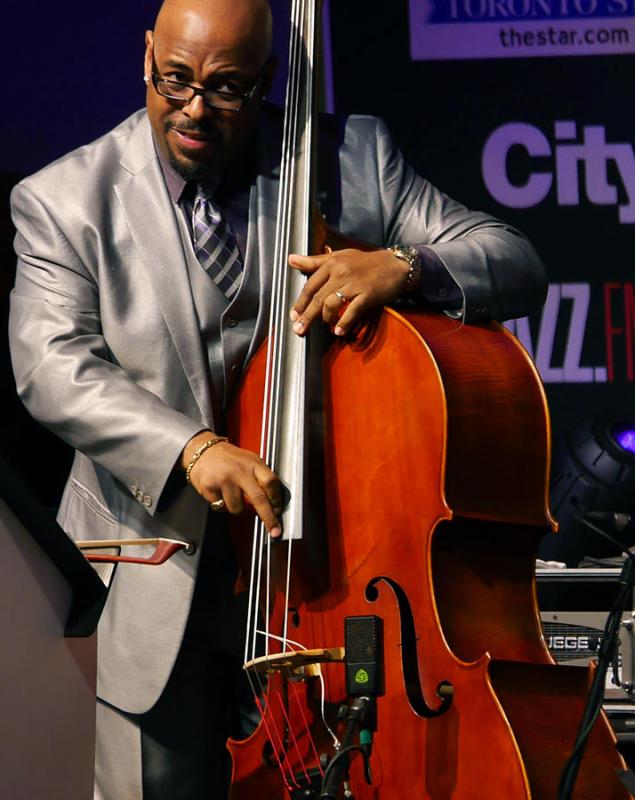 With festival season in full swing, it's always an opportunity to see what the state of jazz is and to hopefully discover something new. The challenge is of course that there are always many choices and one might be guided by personal choice and on a whim as to what to see. This year's Toronto Jazz Festival had a rich collection of performers from different styles and fortunately will not be mistaken for a general music festival.

June 18th started almost exclusively with a 90th birthday celebration of sorts for the beloved Oscar Peterson featuring the Oscar Peterson Quartet with Alvin Queen on drums and Robi Botos on piano with special guest Christian McBride on bass. McBride has been very busy recently. He began hosting "Jazz Night in America" for NPR last Fall and as a result continues to showcase and educate the public about the wonderful tapistry of jazz.

The festival usually has a kickoff party night to help set everything in motion and this year is no exception with artists such as George Clinton and Parliament Funkadelic, Dumstaphunk, and Morris Day and The Time.

The annual popular central location was Nathan Philipps Square which presented some of the more visible acts under the festival umbrella. This year's roster included Tower of Power, Al Jarreau, The Legendary Count Basie Orchestra, Al Di Meola, and the instrumental fusion band Snarky Puppy. Al Di Meola brought his electric sound for the first time in years with his "Elegant Gypsy" tour. Snarky Puppy appeared on the last Friday of the festival and appealed to a younger audience for this sellout and standing-room only audience. It reminded somewhat the vibe that Medeski Martin & Wood brought to this festival on previous occasions: excitment, energy, and a modern touch.

One would be mistaken to think that the Legendary Count Basie Orchestra represents a style that is no longer in vogue. The reality is that the engaging nature of the big band sound is as fun to listen to and to play as ever. Scotty Barnhart carries the leadership mantle of this legendary orchestra, a well oiled machine, by continuing to inspire audiences and musicians with the Basie Kansas City tradition. As most former members are no longer with us, exceptional musicians carry the torch. On the orchestra's 80th anniversary tour, one of many such highlights was to witness alto saxophonist Vincent Herring ripping it up on the fast tempo of Ernie Wilkin's "Basie Power." Carmen Bradford eased things off with "Honey Suckle Rose" and "I got a right to sing the blues." "Blues In Hoss' Flat" by Frank Foster was played in perfect timing and dynamics. These and the staples such as "Lill' Darlin,'" "Moten Swing," and "April In Paris." provided the continuity in the great Basie sound for future generations. It's hard not wanting to play these tunes as a true swinging jazz musician.

It's always a challenge to get a top of the line big bands to travels and jazz fans were fortunate to have Christian McBride return to Toronto for a second festival appearance. Tenor saxophonist Kelly Jefferson and baritone saxophonist Carl Maraghi were last minute stand-ins and played their roles to the tee in front of a supportive audience as well as the stamp of approval from McBride himself. With the voice of Danny Ray, James Brown's valet and "cape man," Christian McBride was introduced to the stage with the band already cranking the wheels to a great 90 minute set. One of the early tunes was "Broadway" featuring a prominent solo by McBride. "Brother Mister" dedicated to James Brown featured Steve Wilson on soprano sax. The first of the bassist's original compositions written 20 years ago was a piece inspired by Cedar Walton for "The Shade of the Cedar Tree." Melissa Walker, a noted vocalist and McBride's spouse, graced the stage by coming up to sing classics such as "When I Fall in Love," "The More I See You," and "In The Wee Small Hours of the Morning." "I'll Close My Eyes" featured a beautiful melodic solo by Maraghi. One of the lengthier and perhaps a highlight piece was "Science Fiction" which as inspired by films and tv shows that McBride enjoyed over the years. In the introduction, McBride hinted that alto saxophonist Todd Bashore was about to burn the place down. And so he did after a quiet and slow start to the piece. Quickly jumping on an instant change towards a fast tempo, Bashore shone through on his solo with full technical dexterity for a good amount of time before abruptly stopping with the melody progressing towards thematic elements echoing classic police tv shows of the 70s. The last piece was the funky title track of Christian McBride's first cd, Gettin' To It (Verve, 1995). What is pleasantly ironic is that in the liner notes of the original recording, McBride indicated under the piece "In A Hurry" that he hoped to "write for a Big Band one day." He definitely reached his aspirations and this evening's show proved it.

Another key place with strong jazz content was the Jane Mallet Theatre playing host to special nuggets such as Robert Glasper, Branford Marsalis, and Charles Lloyd. The highly anticipated Lloyd just recently released Wild Man Dance (Bluenote, 2015) featuring Gerald Clayton on piano, Joe Sanders on bass and Kendrick Scott on drums. The project is defined by long form compositions which exemplifies what this world needs in terms of dialogue (even in music form) and deep reflection in our fast-paced world. Another key concert, a familiar festival favorite, featured bassist Dave Holland for his dynamic quartet. He was joined by Chris Potter on saxophones, Lionel Loueke on guitar, and Eric Harland on drums. On the vocal side, Kurt Elling, John Pizzarelli, and Jamie Cullum were on stage at Koerner Hall. For a more intimate setting Freddy Cole led a few sessions at the Jazz Bistro. Two other noted artists at the Bistro were Fred Hersch who sold out for his only show and Renee Rosnes with her quartet.

A number of local bars and restaurants had a jazz focus during the festival in order to really be part of the buzz during the busiest entertainment season in Toronto.