Baritone saxophonist Carl Maraghi moved to New York City from his native Montreal, Canada. He received his Artist Diploma from the prestigious Juilliard School where he studied and performed with many great jazz artists such as Joe Temperley, Victor Goines, Joe Lovano, Benny Golson, Wycliffe Gordon and Wynton Marsalis. In New York City, he played in concerts with Mr. Marsalis and the Jazz at Lincoln Center Orchestra. He performs and tours with the Lionel Hampton Celebration Band that includes Nicholas Payton, Curtis Fuller, Jason Marsalis, Lew Solof and singer Diane Schuur.

Carl is also involved with Argentine bassist and composer Pedro Giraudo’s orchestra with recordings, concerts in the New York area and tour in Macau, China. Carl is part of the acclaimed David Berger Jazz Orchestra, touring and recording regularly in the U.S. and Europe. This ensemble performed every Tuesday night at the famous New York jazz club “Birdland” for three years, and recorded music for actor/director Denzel Washington’s movie “The Great Debaters”. The orchestra was part of two Mark Twain Prize PBS Specials honoring comedy legends Billy Crystal and Bill Cosby recorded at the Kennedy Center in Washington DC. Carl participated in the Henry Mancini Institute program in Los Angeles where he performed with saxophone great Chris Potter, and trumpet icon Doc Severinsen (bandleader in The Tonight Show with Johnny Carson for 30 years).

After their meeting in California, Mr. Severinsen employed Carl in his own big band that included Ed Shaunnessy, John Bambridge and Snooky Young. He completed his Bachelor of Fine Arts degree in Music Performance at Concordia University in Montreal before his studies at The Juilliard School in New York. Along with performing professionally in different jazz ensembles in the Montreal jazz scene and at the world-renowned Montreal International Jazz Festival, he appeared regularly as a musician on several radio and television shows. He recently recorded with singer Alicia Keys on her CD “As I Am” and performed with Stewart Copeland, composer and drummer of the rock group The Police. He also performed for the President of the United States at The White House, with the Harlem Jazz Museum All-Star Orchestra conducted by Loren Schoenberg. He toured with clarinettist extraordinaire Ken Peplowski and was part of the late singer/pianist and American legend Bobby Short’s nonet. He is performing regularly on the Broadway show hits Jersey Boys and Billy Elliot. Carl Maraghi leads and composes for many different projects including film scores, his own quartet and quintet, the Carl Maraghi Sax Ensemble, and the Mulligan and More 4tet with Gerry Mulligan alumni bassist Bill Crow.

“Blossom”, released in the spring of 2009, is his first opus. It features original compositions and arrangements in different jazz settings and has already been acclaimed by renowned jazz musicians and critics. Show less

From: What's Next
By Carl Maraghi

From: Hiding Out
By Carl Maraghi 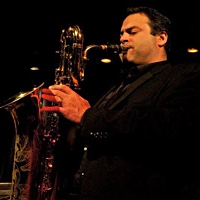 All About Jazz musician pages are maintained by musicians, publicists and trusted members like you. Interested? Tell us why you would like to improve the Carl Maraghi musician page.