By Karl Ackermann
September 3, 2015
Sign in to view read count 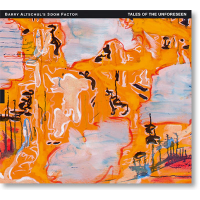 Barry Altschul made his mark on the musical world at a time of both turmoil and guarded acceptance. Charles Lloyd's quartet, with the unknown pianist Keith Jarrett, was bridging a gap with psychedelic rock at the Fillmore West; Miles Davis' Bitches Brew (Columbia, 1970) along with the work of groups like Weather Report, the Mahavishnu Orchestra and Carlos Santana were blurring the line between increasingly progressive rock and even more progressive jazz in the late 1960s and early 1970s. A pivotal element of that new jazz sound was the quartet Circle who would be—in retrospect—a super group pioneering new directions.

The short-lived but very influential Circle, assembled by Chick Corea, included bassist Dave Holland, Anthony Braxton on a number of reeds and Barry Altschul on drums/percussion. While three-quarters of the group went on to be revered as jazz legends, the self-taught Altschul worked through the 1980s and increasingly added to the lexicon of drumming with his expanding kit and musical sensibility. And then he all but disappeared until early in the new millennium.

After a twenty-five year absence as a leader, Altschul reemerged as the leader of a trio whose personnel represents some of the finest talent in music. Saxophonist Jon Irabagon of Mostly Other People Do the Killing, Mary Halvorson's Quintet and own trio with Altschul and bassist Mark Helias, has been steadily working his way up the hierarchy reed players and composers. Bassist Joe Fonda is without question in the ranks of modern counterparts such as William Parker and Mario Pavone and worked with Altschul´s in the late violinist Billy Bang's FAB trio. Altschul, Irabagon and Fonda came together as the 3dom Factor on their excellent 2013 self-titled debut on the TUM label and reunite here for Tales of the Unforeseen.

Though the track titles would indicate a defined structure, three of the album's six compositions are free group improvisations, without charts or definitive concepts to work from. Starting, logically, with "As the Tale Begins," the twenty-six minute piece projects the openness of the trio dynamics. Altschul, while forcefully driving parts of the number, often trades leads with Irabagon and the two step back to give Fonda center stage about twenty minutes in. Extending the title of Thelonious Monk's "Ask Me Now" with the preface "A Tale of Monk..." is not the only change to the often-recorded cover. While respecting the original style of the song, the trio takes a looser, somewhat muted approach, occasionally adding a more propulsive rhythmic touch.

The first half of "The Tale Continues" is a finely detailed Fonda solo that sets the stage for Irabagon and Altschul to raise the intensity almost to the breaking point. Annette Peacock's "Miracles" (again, with a 'Tale'-related prefix) is Irabagon at his best as he rides, uninhibited, over the rhythmic driving of Altschul and Fonda. Altschul's "A Drummer's Tale" is a remarkable solo piece demonstrating the leader's musical and technical proficiency on the kit and other percussion. The masterwork of Tales of the Unforeseen is "And the Tale Ends" with its fluctuating themes, tempo shifts and multiple instruments, it feels more like a sophisticated arrangement that a free improvisation.

It's good that Altschul's 3dom Factor is not an isolated experiment, or one would hope that this second release indicates some longevity. Free improvisation is often license for an abrasiveness that can obscure the substantial intelligence and effort involved in a project but Altschul, Irabagon and Fonda shine in this environment. Their objectives on Tales of the Unforeseen are clear and carried out with considerable refinement amidst all the intricacy.