BY ROGER FARBEY
September 3, 2015
Sign in to view read count 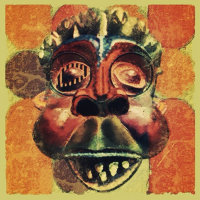 Kutiman is an Israeli polymath composer, musician and film producer. Space Cassava is the title of a 2015 mini-album release which is available as a download and also on a limited vinyl version. Despite the paucity of the combined length of the two tracks, weighing in at around 25 minutes, there is some heavy stuff to appreciate here. Although the line-up would belie its credibility, this is actually big band music made possible by Kutiman's ingenious multi-tracking and ability to play many instruments so proficiently.

The piece itself goes through several movements with the opening percussive undercurrent of "Space Cassava" giving way to an exciting horn-rich ensemble theme. Half way in and Yair Slutzki delivers an outstanding trombone solo on this fourteen minute number. The momentum of the whole work is kept going by a series of ensemble vamps that are embellished by guitar and 70s-sounding synth.

The twelve minute "Cheetah Guava" is a more straight-up funk workout with a groovy guitar opening not dissimilar to the soundtrack to Shaft, again evoking a 1970s feel. Early on in the piece there's a vibrant trumpet solo from Sefi Zisling Ramirez and later there's a fairly manic clarinet solo from Eyal Talmudi. The ensemble resolution is an exciting and engaging one, again embellished by strands of wispy synthesizer.

As might be inferred from the cover art, both pieces are undoubtedly informed by an African influence reminiscent of great bands assembled by the late Fela Kuti and there are even touches of Sun Ra and shades of cinematic Ennio Morricone here too. Kutiman's insistent beats and comparatively simple but captivating melody lines remain with the listener for ages and for that reason it can only be hoped that more extended projects will emerge from him sometime in the near future.