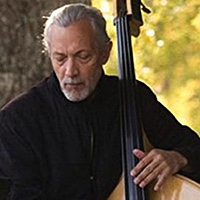 Ron Brendle is one of the most inventive and creative bass players I've ever encountered. When he came in to play on a film score I composed I didn't write out a part for him. I knew everything he would come up with would be highly original yet still fit the score perfectly. Rock solid.
—William Goodrum

Ron Brendle, a freelance bassist in the Charlotte area since 1981, was recently recognized by Charlotte Magazine as "Best Bassist." His innovative compositions and improvisational style have also earned five awards as "Jazz Artist of the Year" by Creative Loafing Magazine. Ron was the recipient of two North Carolina Arts Council Jazz Composer Fellowship Grants, which helped to produce his CDs Hypermobility and Photograph.

Ron's composition Not Forgetting was used in the motion picture The Architect and his compositions Hypermobility and Freeway were featured on two JazzSouth Sampler CDs.

As a first-call bassist in the area, Ron has performed and recorded with many notable jazz artists of international stature, including Nneena Freelon, Clark Terry, Andrew Hill, Charlie Byrd, Charlie Rouse, and Mose Allison. His latest recordings include projects with Loonis McGlohon, Mike Campbell, and Frank Kimbrough.

In addition to maintaining an active career as a free lance bassist, Ron co-founded Big Octave, which performs original compositions and arrangements with an instrumentation of saxophone, drums, and bass: this group enjoys an appreciative audience base in the Charlotte area. Ron also performs numerous educational outreach concerts each year as part of the Charlotte Jazz Society and as bassist with Viva Klezmer.

Ron graduated from Appalachian State University with a Bachelor Degree in music. He studied bass with Charlie Haden at the Atlantic Center for the Arts in New Smyrna, Florida.

All About Jazz musician pages are maintained by musicians, publicists and trusted members like you. Interested? Tell us why you would like to improve the Ron Brendle musician page.