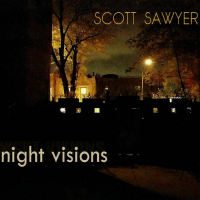 As a North Carolinian, guitarist Scott Sawyer may not enjoy the visibility of his counterparts in better-known jazz meccas, but fans of contemporary jazz guitar shouldn't pass him up. With some smart songwriting instincts and a knack for finding talented bandmates, not to mention possessing terrific guitar chops, Sawyer delivers on the promise of a career dating back to the 1980s that has involved sideman work with everyone from Nnenna Freelon to alt-rocker Chris Stamey. But Sawyer's had several releases under his own name as well, and Night Visions, his first since 2013, is a fine one.

Sawyer is a precise and fluid player, with a sophistication reminiscent of John Abercrombie but with a hint of the bluesy grit of John Scofield. The heart of his work here is his partnership with tenor saxophonist Dave Finucane, who carries the melodic heft of the material equally with Sawyer; he's a thoughtful soloist with an exploratory edge, allowing for some exciting dialogue with the guitarist throughout the album. They're joined by bassist Ron Brendle and drummer Kobie Watkins, a lithe tandem that combines rhythmic agility with a sensitivity to the melodic contours of each track.

Some cuts fit solidly into the post-bop category, like the opener, "John A." fueled by a bouncy rhythm, or "Biz," another medium-tempo stroll which opens up some especially strong soloing from Finucane and Watkins during the last half of the track. But just as effective are the ones that hit more directly: "Crawl" has a late-night barroom feel that allows Sawyer to tap into his inner bluesman, and "Blue Lounge" has a tough, blues-rock sensibility that stays in a dirty groove from start to finish. And then there are the quieter moments, as on "Passage" or "Safe," where Sawyer adds some mystery to his compositional repertoire, and in which the band's subtle way with a winsome melody and a more tempered pace is evident. Finucane's fine-grained conversation with Sawyer on "Passage" is especially rewarding, the two meandering through the piece's gentle twists and turns, saying a great deal with just a few well-placed notes.

The album's closer, "To Be Determined," is another slow-burner with an insinuating melody, making just enough room for Finucane and Sawyer to weave impressionistic solos that leave the listener ready for more. The track's title suggests an openness to new ventures, and hopefully Sawyer will soon have a chance to pursue them with this excellent quartet.

John A.; Crawl; Biz; Passage; Tripper; Safe; Via; Blue Lounge; To Be Determined.