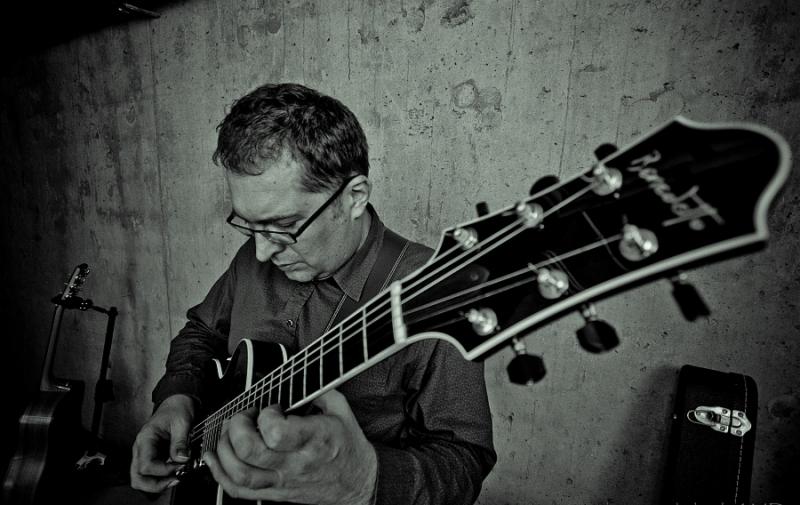 By MARCIN OLAK
September 29, 2014
Sign in to view read count
Meet Marcin Olak:
Marcin Olak is one of the most interesting Polish jazz guitar players. He is one of the few who play modern jazz on classical and acoustic guitars, using the specific sound and articulative possibilities of those instruments; sometimes he also plays electric guitar. He moves between various styles: jazz, classical and contemporary, from fully composed pieces to improvised music. Marcin Olak performs solo and with various bands ranging from free-jazz combos, through classical guitar ensembles, to a symphony orchestra. Marcin is also appreciated as an arranger and composer: he writes chamber music and concertos, jazz themes and songs.

Usually guitar in jazz is treated linearly. Most guitarists play with a pick, and thus are able to play a single note melody or chords. Marcin Olak -with his classical guitar background -plays differently. He creates multi-level, complex textures, using the specific sound and articulative possibilities of his guitars, according to the European guitar tradition. And that's not the end of surprises...

Marcin graduated from Fryderyk Chopin Academy of Music in Warsaw (PL) in classical guitar. He took part in numerous master classes with classical guitarists Roberto Aussel and Jorge Cardoso, among others, and jazz performers like Ralph Towner and Scott Henderson. Marcin Olak has played at some of the most important Polish guitar and jazz festivals, such as: Warsaw Summer Jazz Days (2013, 2008), Warszaw Autumn (2007,2009), Jazz na Buduku (2006, 2008, 2012), Jazz w Ruinach (2007), Guitar City (2005, 2008), Jazz Juniors (2005), Warsaw Underground Jazz (2003) and many more. Warsaw Guitar Festival in 2008 and 2013 seem particularly worth mentioning as Marcin's own concertos for jazz guitar trio and orchestra (2008) and for two guitars and strings (2013) were performed there for the first time. Marcin has also played on the most important stages in Poland, including the National Philharmonic Hall in Warsaw and Witold LutosÅ'awski Concert Studio of the Polish Radio. He has recorded for Polish radio and TV on numerous occasions.

I knew I wanted to be a musician when...
I touched a guitar for the first time. It was pure magic! Well, it still is.

Your sound and approach to music:
I try to mix European contemporary chamber music with jazz improvisation. I prefer clean, acoustic sounds.

Your teaching approach:
I try to help my students find their own approach to playing music. Simultaneously we work on technique and musical vocabulary, to make their expression as fluent as possible.

Road story: Your best or worst experience:
Once I was invited to play at the fan made jazz festival, Jazz na Buduku. When I came to the spot... well, I was much more than surprised. They just set up a stage on a clearing in the middle of the forest, and I was sure something was going to be completely wrong. Fortunately I was wrong. They had really great sound engineers, the audience was great. I played on that festival two times more, and each time it was a great experience.

Your favorite recording in your discography and why?
Crossing Borders -but I'm looking forward to the next one.

What do you think is the most important thing you are contributing musically?
Melody, feeling. And some unpredictability. Well, quite a lot...

Did you know...
I started to play a guitar when I was 17? Before that I was interested in mathematics.

How would you describe the state of jazz today?
Changing.

What are some of the essential requirements to keep jazz alive and growing?
Educate people -make them understand what we do. Try to make them realize that music is something deeper than just entertainment.

What is in the near future?
I'm writing music for my next project -I want to recompose some renaissance lute music, and I hope to record it this fall.

What's your greatest fear when you perform?
When I play, I forget about everything but the music, so I forget my fears too.

What song would you like played at your funeral?
"Deus in adjutorium meum intende."

What is your favorite song to whistle or sing in the shower?
None. I improvise.

If I weren't a jazz musician, I would be a:
Unhappy person.