BY BRUCE LINDSAY
September 29, 2014
Sign in to view read count 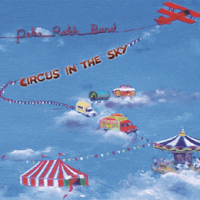 It's virtually impossible for any contemporary musician to have emerged in isolation—to have developed a style or technique unaffected by those who have gone before. Guitarist Pete Roth is no exception—the press release name checks John McLaughlin, Jonathan Kreisberg and John Scofield as contributing to the German-born, London-based player's approach to his chosen instrument. On Circus In The Sky, Roth's second album, he makes use of these influences—and more—to craft some skilfully written and played tunes.

Roth's writing encompasses a range of styles. "Little Mr X"—dedicated to Roth's young son—and the swinging "Smile" are bright and joyful. Roth's guitar is flowing and fleet-fingered, Loren Hignell's sax sound is warm and welcoming. "RB-School" mixes funk and blues into an immediately enjoyable tune, showcasing the grittier side of Roth's writing and the band's playing.

"Morning Prayer" is a gentle, meditative, number led by Roth's nylon-strung acoustic guitar and Hignell's sax. "The Return," featuring producer and label boss Nicolas Meier on nylon-strung guitar alongside Roth's electric instrument, shares this laid-back approach. The playing is beautiful, but over the seven or eight minutes of each tune their lack of dynamism becomes apparent and they fail to hold the attention.

It's the trio of fast, powerful, tunes that provides Circus In The Sky's highlights. "Uprise" opens the album with a prog-inspired bang (King Crimson springs to mind in the combination of guitar and sax). "Gotta Shoot" reprises the attack of "Uprise," Hignell's biting sax riffs and Gabor Dornyei's powerful drumming leading the way. Hignell's throaty tenor and Terl Bryant's fierce percussion drive "The Sicilian," the final member of this up-tempo, exciting, trio of tunes.