Born in 1954, Scott Henderson grew up in an era where blues-rock was at it's peak. His formative musical years took place in South Florida where he played the clubs with various bands, playing everything from Led Zeppelin to James Brown. As he was learning his instrument, Henderson was influenced by Jimmy Page, Jeff Beck, Jimi Hendrix, Ritchie Blackmore, and his favorite blues guitarist Albert King. Even though Henderson claims to be more of a blues-rock player, it was the influence of jazz that led him to the style of playing and composing that he is now famous for. Scott studied arranging and composition at Florida Atlantic University, then moved to Los Angeles in 1980

Guitarist Andrea Balestra makes a cerebral investment with every note he plays and with all of his compositions. A lot of guitarists like to jam. Balestra isn't one of them. Substance is preferred over droning speed. His highly intensified music is born of traditional Italian music...being from Sicily perhaps a factor...a deep integration of blues, a ... 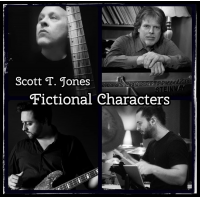 Let's face it, if you're an electric guitarist with high-level jazz fusion chops, there are certain inevitabilities. Merely treading (or in this case stomping) through the stylistic domains of Tribal Tech, Allan Holdsworth, The Chick Corea Elektric Band and the like means stepping into the quicksand of comparison to such behemoths of the genre, so one ...