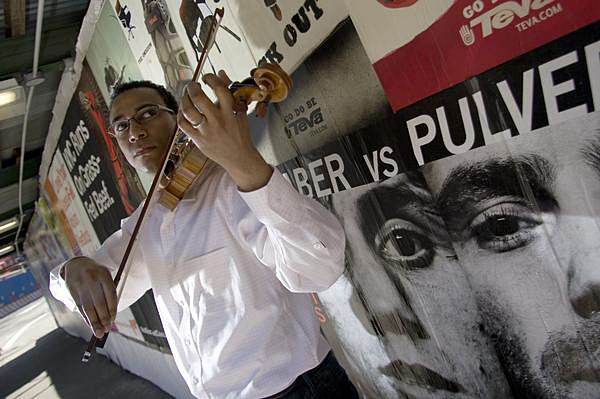 Majid Khaliq is a violinist and composer cut from a different cloth. He has been described by legendary musician Wynton Marsalis as having "a unique blend of improvisation, groove and technical sophistication." Although classically trained, Khaliq's passion and musical palette ranges from the roots of American jazz music to the greats of the progressive jazz scene. He is quickly establishing himself as a rising talent in the world of jazz.

In 2002, Khaliq graduated from the Juilliard School with a Bachelor of Music and in 2010 with a Master of Arts in Jazz Performance from Queens College's Aaron Copland School of Music.

Khaliq has played with great musicians such as Wynton Marsalis, Kenny Barron, Antonio Hart, John Blake Jr., Mark O'Connor and Regina Carter. In 2008, Khaliq was the recipient of the prestigious Meet the Composer's Edward and Sally Van Lier Fellowship Award for his work in composition. On February 8, 2011, he will release, The Basilisk, his greatly anticipated debut CD. "Progressive jazz violinist has captured the ears of New York insiders that know the wheat from the chaff, and have declared him the wheat." Chris Spector, Midwest Record.

I knew I wanted to be a musician when... I had a chance to see Itzhak Perlman play the Tchaikovsky Violin Concerto live, during my time at Interlochen Arts Camp. I was a student there, the summer of the performance, and found the music Itzhak had presented to be the definitive experience for my future musical journey. At the time it was just the violin and any music that it could make. I was awestruck.

Your sound and approach to music: My sound is a mix of some very definite influences. One, classical old Russian style violin technique as originally taught by the great Leopold Aura. The second is the grooves and harmony from great American Jazz masters, past and present. McCoy Tyner is one of the strongest influences in my sound.

Your teaching approach: My philosophy can be summed up in a quote by the great violinist Erik Friedman, "when teaching I first would like to save my students from myself." Meaning one should be mindful of the problems one has and teach the students only the successes one has to offer. Also, students should know that time and timing makes the difference in music.

I have already been blessed with a great group of musician on my current project, The Basilisk (to be released February 8, 2011). Eric "ELEW" Lewis for groove and emphasis. Jeb Patton for refined touch and classiness. Ivan Taylor for deep soul. Jonathan Blake for time and almost clairvoyant timing. Charles Porter for brassy beauty and chamber-like ensemble. And Andrea Vocaturo for the ambiance. I just want to think about my reality and leave the dreaming alone for now. However, I would love to do a project with Kenny Garrett because he has all of the things I love most in music.

Road story: Your best or worst experience: No real crazy stories. But, I have a wonderful story from one show I did in the summer. My band was playing in Harlem and we were grooving on a Bobby Watson tune named "Time Will Tell" and, midway through the song, this four year-old girl started to dance and get down with us. I was really shocked because I wasn't sure what young people thought about jazz music, especially that young. However, the music said something to that child and she couldn't control here urge to cut it up on the dance floor. Her inspiration that day is my inspiration every day. To make the music live in others to the point of uncontrollable ecstasy.

Small's Jazz Club is my current favorite club. The acoustics are good. The atmosphere is warm and inviting and it is a small but classy place. St. Nick's Pub also because the people are one of a kind there.

The first Jazz album I bought was: John Coltrane, My Favorite Things.

What do you think is the most important thing you are contributing musically? I hope that I have a chance to show people the different ways of applying violin to the music of jazz. And, that people enjoy the grooving strings as much as they love the lyrical.

My great-grandfather was the Ed Smalls of the original "Small's Paradise in Harlem." And I was the character "Naheem" in Wes Craven's Academy Award-nominated feature film, Music from the Heart, starring Academy Award-winning actress Meryl Streep.

Joe Henderson, In and Out.

Joe Henderson, In and Out;

How would you describe the state of jazz today? I view the state of jazz in a positive place. In the area of education and institutionalization of jazz, it is doing better than ever. In the area of performance, it is more difficult because the live performance of music has moved to many new places. Places like the Internet are spaces that did not exist during John Coltrane's time. Thus, making the market more spread out and harder to grasp. However, that isn't negative. It is just different.

What are some of the essential requirements to keep jazz alive and growing? The continued understanding that jazz is from "the Blues." And that jazz is an American art form that needs respect and love from its own countrymen and women to thrive.

What is in the near future? Looking to do some touring in Japan this summer and to go to Europe in the fall.

I teach the violin in NYC public school C.S. 73 in the Bronx, through the non-profit organization Change for Kids. And teach in a Waldorf School in Garden City, Long Island.

If I weren't a jazz musician, I would be a: I see no other way of living.