Rarely mentioned now, the violin was an important part of Jazz during it's formative years! It was heard in the earliest New Orleans bands and was present in most all the new 'Dance' bands at the start of the 20th Century. In fact, violin sections continued to be a part of the jazz music scene right on up to the Swing Era.

Eddie South born on Nov 27, 1904, in Louisiana, MO, began his career in the 1920s. Due to his Classical Music training, (from Chicago Music College) he would probably have chosen to be a 'classical' musician, but, unfortunately, in those days the color of his skin precluded that option.

Starting in the early 1920s, South worked in such Chicago bands as Jimmy Wade's Syncopators, the Charlie Elgar Band, and Erskine Tate. In 1928, he traveled to Europe and studied at the Paris Conservatoire de Musique where he was deeply impressed with European music. He was even more impressed with the Gypsy melodies he heard on his visit to Budapest. Later, he would often delightfully weave those gypsy melodies into his jazz improvisations.

Returning to Chicago in 1931, South formed his own band The Alabamians that included the young bassist Milt Hinton. During his 1937 trip to Paris, South recorded with jazz greats Django Reinhardt and Stephane Grappelli. However, he worked in relative obscurity for most of his life (mostly in the Chicago area, but also in Los Angeles, CA and New York, NY) known only to true Jazz aficionados.

Some critics feel that his 'formal' training caused his playing to be also somewhat 'formal' and lacking in a 'Swing' feeling. Still, his subtle musical interpretations earned him the sobriquet “The Black Angel of the Violin”.

In later years he recorded for Chess and Mercury, and also made a final set released by Trip. South's other early recordings (covering 1927-41) have been reissued on a pair of Classics CDs. One of the top violinists of the pre-bop era South was a brilliant technician who, were it not for the universal racism of the time, would probably have been a top classical violinist. 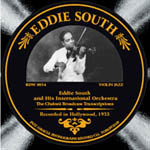 The Dark Angel of the...

The Dark Angel Of The...

All About Jazz musician pages are maintained by musicians, publicists and trusted members like you. Interested? Tell us why you would like to improve the Eddie South musician page.