BY DAN MCCLENAGHAN
February 18, 2011
Sign in to view read count 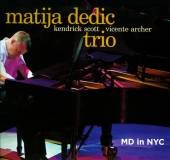 Pianist Matija Dedic's MD in NYC tiptoes into existence on a delicate rhythm, joined in short order by a sprinkling of crystalline notes in the melody, with a whisper of brushes and spare but assertive bass lines. "Her Name" is one of the pianist's five originals in the set, and has a wistful reverence that speaks, perhaps, to a yearning infatuation, bringing to mind the artistry of Bill Evans and Herbie Hancock.

The Croatian-born musician has created a superb piano trio outing, a pared down approach that he augments very adeptly with synthesizers. "Slawenskya," another original, features a subtle electric cool breeze undertone enhancing the harmony, leading into the brightly-swinging trio tune,"Update."

Hancock's much-covered "Maiden Voyage" has never been covered better. It is a spare and understated rendition from Dedic and his trio mates, with eerie hints of synthesizer washes huffing like wind blowing through the eaves, a sound leaning just over the edge of conscious perception. The longest tune of the set at just over ten minutes—with its deft trio interplay and a brief-but- marvelous bass solo—it is the CD's centerpiece and masterpiece.

Miles Davis's "Blue in Green" opens at a slow and deliberate pace, piano trio only, until Dedic brings a lush string arrangement into the mix, making a Kind of Blue (Columbia Records, 1959) "with strings" outing seem a very interesting potential project.

Dedic's "Cheekee Chicks" features a funky dance groove and electric piano; and Sting's "Fragile" is another trio affair, a floating six minutes of loveliness and trio cohesion, followed by the more stately and muscular Dedic-penned "Jungle Blues." Concluding the CD, Toby Gad's "If I Were a Boy," with it's whirring synthesizer orchestration, has the feel of a soundtrack to a movie with a pastoral backdrop.

MD in NYC introduces a very talented and versatile artist in Matija Dedic.

Her Name; Slawenskaya; Update; Maiden Voyage; Angst; Blue in Green; Cheekee Chicks; Fragile; Jungle Blues; If I Were a Boy.