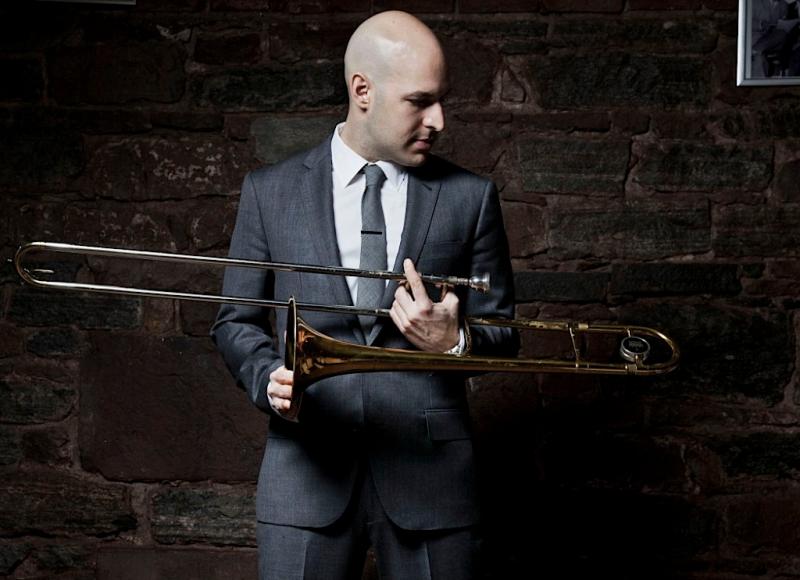 Josh made the move to New York in the early 2000s. He quickly began establishing his name as an up-and-coming jazz trombonist, studying with jazz greats Slide Hampton, Steve Davis, and Barry Harris by day, while cutting his teeth on the local scene at night. Aside from his work as a leader, notable credits vary far and wide, from small group work with renowned jazzmen Grant Stewart, Frank Basile and Ehud Asherie, to large groups such as Darcy James Argue and the Smalls Big Band. He has also performed alongside living legends, including a recent guest appearance with Freddy Cole on his latest album, This and That (HighNote, 2013).

Josh has also relentlessly toured internationally for close to a decade as a member of Warner artist Michael Buble's band. Numerous TV credits include Saturday Night Live, BET on Jazz, PBS Great Performances, The Late Show with Jay Leno, The Tonight Show with David Letterman, The Oprah Winfrey Show, The Ellen DeGeneres Show and Live with Kelly and Michael.

Josh is a Conn-Selmer artist, two-time recipient of a Canada Council for the Arts Grant, and was a semi-finalist in the 2003 Thelonious Monk International Jazz Trombone competition. Author and All About Jazz contributor Trish Richardson also features him in her book The Soul of Jazz (Grayson James Press, 2011). With his newest record Songbook Trio and his previous album The Feeling of Jazz, Josh has secured his footing as an artist with a singular voice and vision as well as a leader on the trombone in the world of jazz.

I was always a musician. The transition from student to professional was only differentiated by a paycheck, but the sense of performing has never changed. The only time I ever had to make a decision was out of high school when I was a little lost like a lot of kids. However, my first day in college was like a train hitting me saying, "This is what you are supposed to do."

I try to make clear and concise statements, thinking more in terms of how Hemingway would write. I like to play to what are the potential strengths of the trombone, the sounds I like, its range, and the way I like it articulated.

Music is a language and like any language it's best not bury your head in the books. It is best to get out to hear and speak it in order to really learn the nuances.

A flight back home from Australia that started with basically a 10-hour circle that went nowhere. When we got home 38 hours later, I wasn't the happiest.

The Trombone Master by J.J. Johnson. In my opinion, some of JJ's best playing is on this record. Although the album on a whole isn't my favorite, it will always hold a place in my heart. It's just one of those things that comes at the right time in your life and when you are building yourself as a musician. It definitely lives up to its title.

I'm striving to contribute a unique musical sound in the tradition that my musical heroes would be proud.

I wanted to move to Hawaii and windsurf as a kid. Fortunately, my parents didn't let that happen.

Frank Sinatra with the Tommy Dorsey Orchestra, The Essential (RCA).

Disarray, there are so many versions of what jazz is. You just have to go with what you love and try to make what's in your head come alive. The '90s was a jazz utopia for a young kid, with great players who had new, subtle, and energizing twists on modern jazz. There were record deals and plenty of places to play. My friends and I are doing our best to try to get the music to the people again and catch their interest.

Musicians who care and an audience to play for.

Songbook Trio is my new endeavor. I'm trying to create an intimate acoustic trio with a twist on the classic trio lineup.

Not being able to play my best.

"Stardust" always does the job.