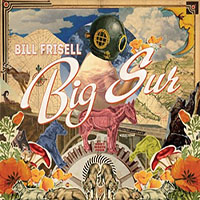 Along with household names like Pat Metheny and John Scofield, Bill Frisell is one of the most distinctive American guitarists of his generation. Despite his penchant for abstraction, Frisell's phrasing, touch and tone are as singularly unique and readily identifiable as those of his more conventional peers. Though his vast discography includes bold experimental solo albums and erstwhile membership in John Zorn's infamous Naked City, Frisell's abiding fascination with Americana has found him fine-tuning his encyclopedic interpretations of American folk music traditions over the past three decades—honing his reputation as one of the most imaginative stylists in the milieu.

Commissioned by the Monterey Jazz Festival, Big Sur was conceived by Frisell as a multi-part suite for an augmented version of his string-based 858 Quartet and composed during a residency at Glen Deven Ranch, located a short hike from the region's expansive California coastline. Subsequently rehearsed on site by the aptly named Big Sur Quintet, violinist Jenny Scheinman, violist Eyvind Kang, cellist Hank Roberts and drummer Rudy Royston experienced first hand the breathtaking vistas that inspired Frisell's work, yielding a truly simpatico performance from the group back in the studio.

The album's 19 succinct tunes—ranging from the hazy title track to the sunny "A Beautiful View"—draw upon an array of rustic textures to evoke the area's rugged panoramas, bolstered by Frisell's sophisticated harmonic sensibility. Augmenting the strings, Royston's trap set work adds percussive drive to the proceedings, providing a percolating undercurrent for surf-inflected numbers like "The Big One" and menacing blues fervor to the broodingly surreal "Highway 1." The acoustic strings work in tandem, supporting the leader's lyrical extrapolations with lush contrapuntal interplay. "Gather Good Things" demonstrates Frisell's keen ability to build ascending electrified drama from a spare neo-classical figure, while "Hawks" yields the same rousing effect from a spry countrified melody.

Concise to a fault, a few cuts clock in around a minute and a half, with "A Good Spot" less than one; accordingly, this collection of tightly-composed miniatures sounds more cohesive when treated as a single long-form work. Such long range vision requires dedication—not only from the artist, but from his associates, including business associates. Issued by the recently revived Okeh imprint, Big Sur marks a return to the major label environment that supported Frisell's career-defining pre-millennial output. Time will tell whether Okeh fosters the same creativity Nonesuch encouraged from Frisell in the 1990s, but all signs indicate the start of a promising relationship.