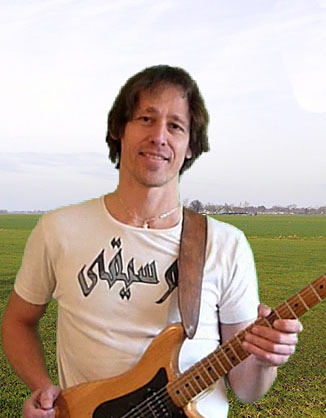 Virtuoso Dutch guitarist Jan Wouter Oostenrijk completed his professional jazz guitar studies at the Conservatory of Amsterdam in 1995. He was part of successful Moroccan Rai formations. After this period he developed his own crossovers, where he combines North African music culture with his own roots. His music possesses energetic and strong roots-oriented rhythms and melodic improvisations on guitar that moves from bebop lines to screaming blues and Rock and Oriental "Maqama"-like playing.

Teachers and/or influences?
I've had different obsessions every five years. As a kid it was Vivaldi's Four Seasons and science fiction novels, and as a teenager it was The Cure (early) and Iggy Pop. As a jazz student, my heroes were Wes Montgomery, Miles Davis, John Coltrane, Joe Pass, Robben Ford, Jimi Hendrix and Joe Zawinul. For the North African part in my music, I was inspired by Moroccan/ Algerian music such as rai, gnawa aan chaa'abi masters like Cheb Khaled, Karim Ziad and Majid Bekkas. In Sudan I was inspired by Dalib music. In recent years I've been more fascinated by classical oriental music and traditional Egypt styles, like sharqi, zar music and soefi—think of artists Um Kalthoum, Zar, female violinist Abdo Dagher and Iranian oudist Munir Bashir.

I knew I wanted to be a musician when...
...when I started to see it as a profession, I think that was around age of twenty.

Your sound and approach to music:
The new album, Sharqi Blues, is very guitar-oriented, the way I play deriving from blues, jazz and rock music, but integrateed with Oriental melodies. We used normal blues chord structures, and make little changes in the harmony to make it fit with the Arab scales. The rhythms derive from belly dance music—tight but with a modern jazzy approach and with space for improvisation and creativity.

Your teaching approach:
I always work from the student's reality. By playing and communicating I add tools and inspire them to get the best out.

Your dream band:
It's not about how to get it, but how to keep it !

Road story: Your best or worst experience:
I still remember an open air concert in Marrakech. The mixing console was placed underneath the stage because the audio cables were too short. So there was no eye contact with the sound engineer, when we wanted to change our volume we had to pull our instrument cables and stamp our feet.

Your favorite recording in your discography and why?
Herbie Hancock, Man-Child (Legacy)—so groovy, such wonderful atmospheres and playing, beautiful arrangements and improvisations; very inspiring!

The first Jazz album I bought was:
Louis Armstrong and His Hot Five.

What do you think is the most important thing you are contributing musically?
Connecting cultures.

Did you know...
I recently became proud father.

How would you describe the state of jazz today?
I see most innovation of jazz taking place in Europe, with crossovers with roots and ethnic-oriented musical styles as the result of migration movements.

What are some of the essential requirements to keep jazz alive and growing?
Adapt to the times.

What is in the near future?
Hopefully a tour in Egypt; we're workin' on it!