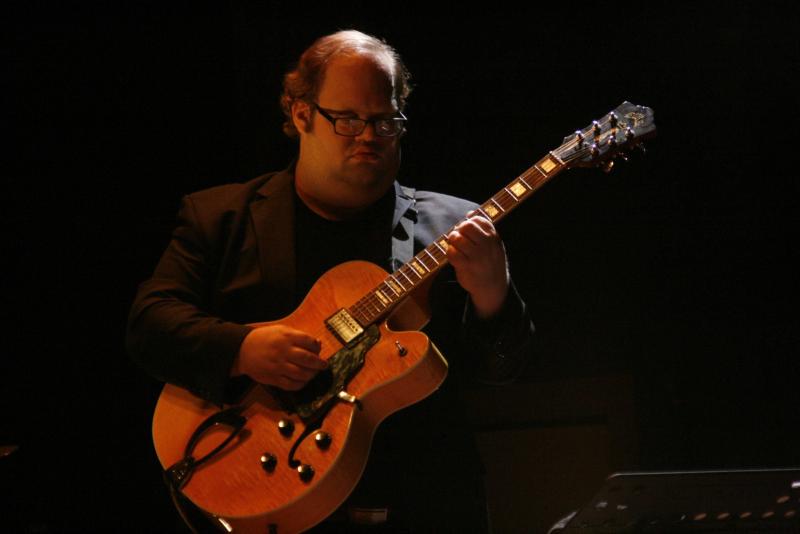 By Brad Myers
January 5, 2015
Sign in to view read count
Meet Brad Myers:
Brad Myers has spent his life in the pursuit of making music that is tasteful and driven by a deep connection to the soul, regardless of stylish trends or prognosis for financial success. Currently residing in Cincinnati, Ohio, he is an ever evolving improvising musician who has played the guitar since he was 10 years old. Along the way he has picked up considerable skills on electric bass, mandolin and vocals to help diversify his palate of available colors. Brad can be seen on any given night playing jazz, funk, rock, country or folk with some of the area's greatest artists, all with big smile on his face.

Myers is most well-known for his work with Ray's Music Exchange, a popular Cincinnati based funk jazz outfit with a penchant for long energetic improvisational grooves, where he was able to contribute as a guitarist, composer, and producer along with fellow CCM grads Paul Hogan, Michael Mavridoglou, and Joshua Quinlan.

After appearing on the local stop of the 1998 H.O.R.D.E. festival he and the band spent the next 8 years producing and releasing 5 CD's, traveling around the country, and developing a diverse yet unique and interactive approach to improvisation that incorporated equal elements from Miles Davis' electric period, Frank Zappa, John Zorn, The Meters, and Medeski Martin & Wood.

Having been a full-time professional musician and teacher since studying at Cincinnati Conservatory of Music for his undergraduate degree, Brad Myers returned to CCM for his Master of Music in jazz studies (expected completion May, 2014). He is currently working on two major projects to be released within the next year. The first is an album with the Brad Myers Quintet, a full length recording of mostly original compositions. The second is a full length duo collaboration with legendary Cincinnati jazz bassist, Mike Sharfe.

He is also an active member of the Steve Schmidt Organ Trio, Jeremy Pinnell and the 55s, Wild Carrot, and the David McDonnell Group.

Teachers and/or influences?
In chronological order, I have studied with Glen McCarthy, Pat Cavanaugh, Danny Leonard, James Smith (CCM) and a few random lessons with people like Mark Elf and Harold Kennedy. I've also learned a great deal from all of the professors at the University of Cincinnati College-Conservatory of Music including Rick VanMatre, Pat Harvison, Phil DeGreg, Brad Goode, John Von Olen, Kim Pensyl, Scott Belk, and Tom Haines. Of course, I am always growing as a musician and learn from mentors with whom I am lucky enough to play with regularly such as Mike Sharfe and Steve Schmidt.

I knew I wanted to be a musician when...
I never had any doubt I would be a musician. The gift of my first guitar coincided with the release of the movie, Back to the Future, in 1985. Seeing that movie did a lot to motivate me to practice. In fact, the first tune I had my teacher show me was âJohnny B Goodeâ which I worked really hard at to learn for a school project for which I donned a tweed jacket and rocked for the class.

I was fortunate enough to play guitar in the school jazz band from 7th through 12th grade. But it was a two week jazz intensive summer camp where I was placed in a combo run by an incredible saxophonist from Boston named Dan Smitty Smith. It was that summer that the jazz improvisation bug took hold and the true meaning of the conversation, both between the audience and the musicians as well as between the musicians themselves really came into view. After that point, I decided I wanted to be a jazz musician and engage in that conversation as often as possible.

Your teaching approach:
I tend to be very goal oriented with my motivated students, trying to take them to the next level in their own journey on the instrument. The way I achieve that differs depending upon the student, their goals, and interests. Ultimately, I am trying to show them ways to teach themselves what they want to know by figuring out how they learn best, and adapting to those strengths. Patience, compassion, and a demonstration of my own passion for music and the guitar are key factors in my approach.

Your dream band:
I am very fortunate to play in many situations with the ideal personnel already in place. However, if I had to give you a list of famous improvisers with whom I would love to play together regularly (or ever) that would be, in no particular order, Wayne Shorter, Brian Blade, Dave Holland, Keith Jarrett, Fred Hersch, and/or Chris Potter.

Road story: Your best or worst experience:
When I was on the road with Ray's Music Exchange, we oftentimes were traveling while some members were still in school at the University of Cincinnati College-Conservatory of Music. We were also notoriously stupid at booking gigs for the required amount of money to actually get there and back without losing money. The most ridiculous example of this was when all ten of us (eight band members and two crew members) piled in our fifteen passenger van and drove nine hours from Cincinnati to Madison, Wisconsin on a Wednesday to play a venue that was under-promoted and too small to really even fit is on the âstageâ (and by stage I mean the area they cleared of the tables when we were to play). There were more people in the band than in the venue all night. And when it came to the end of the gig, the manager informed us that they didn't have enough money to pay us anything. But as a condolence offered to feed us each a single helping of garlic mashed potatoes. Now they were good potatoes, but they didn't pay for the gas.

After the gig, we promptly jumped in the van and drove nine hours to Cincinnati overnight so a couple guys could get to school for a test the next morning. If I remember correctly, they were so tired from the trip, that they skipped the test. Even though that was the reason we rushed to get back.

I guess I could say that was the one time I actually played for potatoes.

Favorite venue:
My favorite venue would be a tie between The House of Blues in Chicago and the Fox Theater in Boulder. Both have incredible stages and great sounding rooms. The House of Blues in Chicago had an outstanding green room area and first rate staff. The Fox Theater in Boulder has (at least when I was there) a great sushi restaurant attached to the lobby and we were given tickets to eat there before the shows. My favorite roll of theirs was called an orgasm roll and I got a kick out of having an orgasm roll before a show. Let's face it, it was so great, I had another one after the show. Hah.

Your favorite recording in your discography and why?
I am really proud of the DVD we made for the first Ray's Music Exchange Reunion Show a few years ago. However, I am very enamored with both of the recordings I am working on at this moment. The first being a quintet recording of my own originals for which we are currently running a crowd-funding/pre-order campaign through Pledge Music. And the second being a duo recording, hopefully the first in a series, with legendary Cincinnati bassist, Michael Sharfe. The intimacy and empathy on this recording is really something to be proud of and I can't wait for people to hear it when it is done.

The first Jazz album I bought was:
It was a jazz guitar compilation on cassette that covered a survey of the history of jazz guitar â from Charlie Christian through Pat Metheny. I can remember being fascinated at how the style of playing the instrument evolved over time.

What do you think is the most important thing you are contributing musically?
A fresh set of ears, the ability to go just about anywhere on the instrument, and the desire to be musically in the moment at all times whether I am in a rehearsal or performance.

Did you know...
In addition to being a musician, I also have a passion for live theater. I have many opportunities to perform in pit orchestras, but occasionally, I get the rare opportunity to be in the show  sometimes playing guitar, sometimes not. My favorite roles to date have been playing Jim in Pump Boys and Dinettes, Mercutio in Romeo and Juliet, and Van Helsing in Dracula.

What is in the near future?
I'm really excited about two recording projects currently in the works. One is my debut jazz recording with my quintet â that is the one with the crowd-funding campaign through Pledge Music. This recording will feature mostly original compositions and a great group of Cincinnati area jazz musicians (Chris Barrick on vibes, Tom Buckley on drums, Ben Walkenhauer on tenor sax, and Peter Gemus on bass). The other project is an intimately expressive yet classically swinging duo recording with myself and bassist Mike Sharfe. This is hopefully the first release in a series of duo recordings. 2015 looks like it is going to be a productive year for sure.

What is your favorite song to whistle or sing in the shower?
I don't really whistle, but I will occasionally sing the handful of jazz standards I can remember the words to.

If I weren't a jazz musician, I would be a:
Chef, improv comic, or actor because those professions all involve artistry and creative improvisation in some way or another.