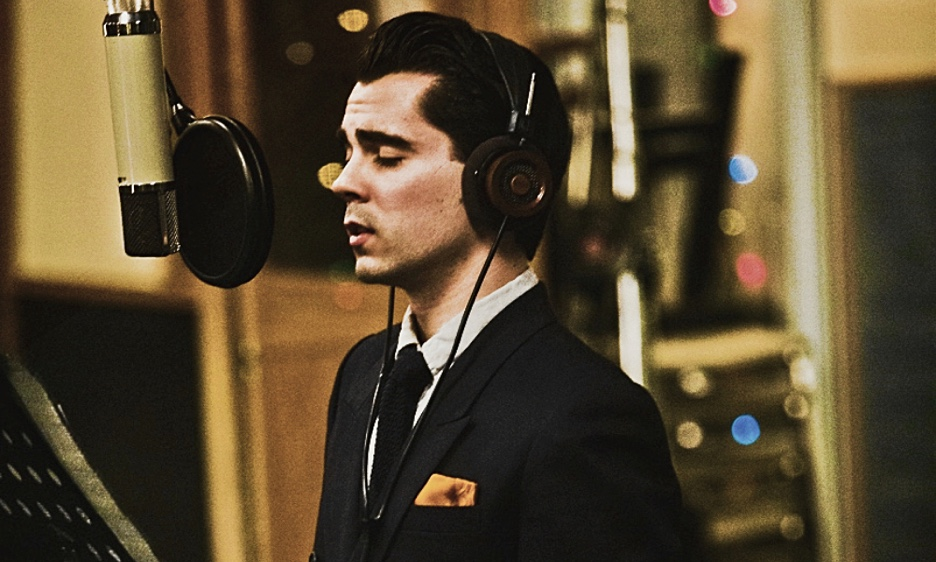 Vocals are a rival to Michael Bublé with a dash of Edwyn Collins. Edgy stuff. Possibly the new Elvis? Too much? Check it out yourselves.
&#151All About Jazz

Alex Bird is a singer/songwriter and actor in Toronto, ON. With a swinging style and an indescribable charm, Alex and his "Jazz Mavericks" are currently working on an entirely new chapter in the Great American Songbook, with their soon to be released, all original debut album, "Whisky Kisses" (Summer 2020). "The Way She Moves," one of the originals off the album, was released on November, 30th, 2019. It was featured on All About Jazz as their "Track of the Day."

Alex literally grew up with the classics. Starting at the age of two, he was taken to hang around the Toronto jazz scene, and met many of the greats along the way; Tony Bennett, Diana Krall, Ray Brown, Oscar Peterson, Cleo Laine, Mel Torme, Clark Terry, Harry "Sweets" Edison, Ray Charles...the list goes on and on. Without even knowing it, his musical training developed, sitting around at smoky jazz clubs into the wee small hours of the morning.

I would say I've been heavily influenced by all sorts of great singers, from Sinatra, to Bobby Darin, to Elvis, to Tom Jones, to The Beatles, to Springsteen, to Dusty Springfield, or to Leon Bridges. This list goes on and on and I've learned something different from each and every one of those people. They've inspired me to find my voice and who I am as an artist, through their music. I wouldn't be here if it wasn't for what's come before me and now I'm trying to share something new within the music that I love, and that music primarily comes from The Great American Songbook.

Something else that helped my start was taking piano when I was a kid with a sweet old Jazz player named, Alf Coward. He played with Illinois Jacquet, Jimmy Dorsey, and a lot of others. He was also the house pianist at George's Spaghetti House in Toronto for many years. I didn't really have a knack for piano, it was more just something I was put into it, but it helped develop my ear, and Alf also taught me an awful lot about life. He used to say "Practice doesn't make perfect...practice makes permanent." And I never forgot that; if you're not doing something correctly, it'll be that much harder to ever get it right.

I was adopted from Romania when I was six weeks old, and came to Canada. I was one of the lucky ones and was given a second chance. My dad was a big Jazz fan, and my first Jazz show was to see Rob McConnell and the Boss Brass at a Toronto club called The Pilot when I was two years old. Everything took off from there. I got to stay up late in smoky Jazz bars, into the wee small hours of the morning, seeing the likes of Oscar Peterson, Ray Brown, Diana Krall, Joe Williams, Freddy Cole, Harry "Sweets" Edison, Cleo Laine, Tony Bennett... I was able to see so many of the old school greats before they left us. I should have been getting ready for bed, or for school, but instead I was making my way into the world of music.

I started to sing just before high school, shortly after getting heavily into Frank Sinatra, and then Bobby Darin, and subsequently so many other different singers and styles of music. I eventually started to develop my own voice and story within my music and began writing and focusing on lyrics and melodies and not just singing the old classics.

I think a large portion of our sound and style has come from developing this new music, having confidence in it, sharing in the creation of it, and infusing it with my many different musical influences along the way. You have to be interpreting not just others, but yourself, as you grow with the music.

I'm lucky to have my dream band. I don't say it lightly when I say the three gents that I get to work with are some of the brightest upcoming stars of the Jazz world. Ewen Farncombe on piano/B3, Eric West on drums, and Scott Hunter on bass. I'm constantly in awe of them. They make me better, and I am lucky enough to also call them friends. It should be noted that Ewen really helped shape my songwriting. He is my musical interpreter. Whenever I have a song in my head, I map it out, sing it for him, and he immediately starts playing it like he's played it a million times before. We work off one another so well, and together we've brought a lot of new music to life. He adds his own ingenuity and musical voice to the process. He started off as someone I was just lucky enough to be working with, and now he's an equal partner on this journey.

I'm trying to take that spirit, that torch, and carry it along in my own way. My band and I are infusing this great tradition with all of my musical influences. We'll see what happens.

I'm also an actor! I went to theatre and film school in Toronto. I've gotten pretty lucky working a lot over the last number of years. Two highlights would be playing, "Young Al Capone" on CBC's Frankie Drake Mysteries, and most recently making my feature film debut in, It: Chapter 2, getting to have a small part working alongside, Bill Hader.

I got extraordinary lucky on this one. I was about 16 at the time. There was a guy just outside of Toronto selling a lot of Sinatra vinyl, I ended up winning a few of them on Ebay. Because he was pretty local, my Dad drove us out to pick up the records. Talking more with the gentleman he mentioned he had a thousands of records, and when we got there we could take a look if we wanted. We got to his place, very nice guy, invited us in. Downstairs was wall to wall records, records in boxes, giant tables of records, it was really something. He directed me over to his Sinatra section and said, "Take a look." I ended up walking out of there with around 80 Sinatra albums, which he sold to me for about $100 dollars. I think he saw how excited I was about the music, so he was very generous with his offer. And that started my collection.

This is very difficult, and it constantly changes....alas (I'll keep it on the Jazzier side)...

Alive and well!! There is so much going on. Especially just looking at my city, Toronto, there is such a passion and love of this music. There are so many great young musicians too, who are making a go of it, creating and collaborating. Jazz is in good hands. It will always live on.

Well, unfortunately the near future has been thrown into immense uncertainty. It has been tremendously hard for all of us, not being able to gig, not being able to create in the same way. I'm still trying to move forward. We will be releasing our debut album, "Whisky Kisses" this summer. The title track is coming out at the beginning of May. We'll try to get that as much traction as possible, and keep staying positive in this new world. Music is key.

Forgetting the lyrics, especially to my own songs!

Beyond the Sea is a go to. I also do a lot of my songwriting in the shower. I have my phone on standby and if a melody takes off I quickly lean out of the shower to record it. Many of my first vocal recordings for songs have the sound of my shower in the background. (True story)

I feel like I'd go against every fiber in my being if I didn't say Frank Sinatra...so Frank Sinatra. What a complicated soul. He had so many layers, such as musicality, and intuition. I'd also want the dinner to be an all you can eat buffet, so it wouldn't end.