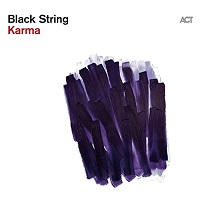 Black String's karma must be good. The globally respected UK magazine Songlines awarded the South Korean quartet its Asia and South Pacific Award for Mask Dance (ACT Music, 2016), the band's potent debut. Critical acclaim for Black String's intoxicating blend of Korean traditional music and free improvisation, however, was universal, with invitations taking it all over the world, including four tours of the Americas. It may seem like an overnight success story, but the band led by geomungo player Yoon Jeong Heo has been honing its craft since 2011.

On the face of it, Karma closely follows the successful road-map of Mask Dance, with traditional instruments wedded to electric guitar and subtle electronics to powerful effect. There are, however, a couple of novelties. French-Vietnamese guitarist Nguyen Le lends his distinctive chops to a couple of tracks, while Radiohead's "Exit Music (For a Film)" marks Black String's first cover version. Both offer glimpses into possible future pathways, but for the rest of the album it is business as usual.

A slow, plucked geomungo motif, a dusting of electronics and Min Wang Hwang's funereal janggu (hourglass drum) announce "Sureña." In turn, Aram Lee on daegeum (transverse wooden flute) and electric guitarist Jean Oh pick up the motif. As the rhythm intensifies Lee stretches out, first on flute and then on yanggeum (hammered dulcimer), with Oh's swapping bending guitar notes for plunging power chords. Flute and guitar then lock in a series of slippery glissandi before the quartet comes full circle to the slow, ritual motif of the beginning.

On the Oriental-flavored "Hanging Gardens of Babylon" dance beat and trilling yanggeum underpin warbling taepyeongso, a double-reed relative of the oboe that sounds like manic laughter. Guest guitarist Nguyên Lê brings fire to "Elevation of Light" and the meatier "Song of the Sea." The latter is Black String's take on a traditional mariner's song and features Hwang's vibrato-heavy, imploring vocal. Against the simple mantra of drum and geomungo, and Oh's fuzz-toned wall of sound, Lê roams freely in an epic that evokes the jam segment of Fairport Convention's "A Sailor's Life."

Geomungo and guitar faithfully trace "Exit Music (For a Film") in an intimate duet that moves between delicate lyricism and powerful crescendo. Fast-riffing guitar accompanies Hwang's shamanistic vocals on "Exhale-Puri," where mellifluous flute contrasts with the prevailing gravitas. Hwang's ghostly wailing haunts the brooding "Karma"—an ethereal track, punctuated by shimmering gong, that simmers quietly without ever taking off. Interweaving melodic motifs and percussive drive combine on "Beating Road," a folksy tune punctuated by soaring electric guitar. There's a dirge-like feel to the doomy guitar, slow drum beat and melancholy flute at the outset of "Blue Shade," but as the rhythm quickens, propelled by an unrelenting geomungo pulse, guitar and flute bind in dramatic flight.

A fascinating blend of dark hues and gentle lyricism, folksy textures and heavy metal intensity, Karma is another fine offering from the highly original Black String.