BY JERRY D'SOUZA
December 2, 2009
Sign in to view read count 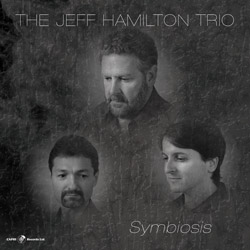 Jeff Hamilton's presence as a drummer is pervasive both with his trio and as part of the Clayton/Hamilton Jazz Orchestra which he co-leads with bassist John Clayton. Hamilton's reach as a drummer goes well beyond these two outfits, his history as a musician complementing Oscar Peterson, Warren Vache, and Phil Upchurch among others. Style and approach may have differed, but Hamilton let his drums signal captivating rhythmic signposts.

The trio setting is a compact one. The interaction between Hamilton, Christoph Luty (bass), and Tamir Hendelman (piano) is facile and lights up the many moods that move from the intimate to the upbeat with facile ease. The ballads are warm and graceful, the link between the musicians made palpable by the emotion. And certainly, the empathy is in joyous evidence when they go out and swing.

Hendelman fills "Symbiosis" with delicacy, his open, spaced notes falling in gentle splendor. He lends character and kindles warmth which Hamilton stirs to a higher plateau with his brushwork. The final stroke of grace on this beautifully crafted tune comes from the deeply intoned bowing of Lutz.

Miles Davis' "The Serpent's Tooth" sparkles in its array of invention. Changing timbre and pulse settle into a bop drive as Hendelman opens a river of mellifluously flowing ideas. Hamilton and Luth ride the tempest up close, the percussive kick of the former pegged by the jaunty picking of the latter.

Hamilton proves his mettle as a composer with the Latin motifs of "Samba De Mertelo" that stirs up a gradual storm from the eddying circles of the piano. Hendelman expounds on the melody thrusting it forward and then drawing it inward, his interlocution now more open. Hamilton simmers raising the temperature to add another salivating layer on an irrepressible tune.

The trio is sublime, sprightly, and inspired, the perfect ingredients for a most enjoyable CD.