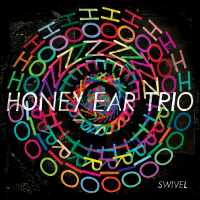 The opening track of Allison Miller's new Honey Ear Trio recording, "Arby," had me singing the lyrics to "Heavy Metal Drummer," the 2002 Wilco hit song ..."She fell in love with the drummer/Another and another/She fell in love/I miss the innocence I've known/Playing KISS covers, beautiful and stoned." That connection is made from the heavy, maybe better yet, HEAVY entrance the Honey Ear Trio makes with track one. Miller, saxophonist Jeff Lederer (Matt Wilson Quartet, Brooklyn Blowhards) and bassist plus electronics wizard Rene Hart come loaded for bear. Not the same Otis Was a Polar Bear (The Royal Potato Family, 2016), the title of Miller's Boom Tic Boom recording. This time they come with their shock and awe approach.

Once the cobwebs have been blown out, the trio gets down to the wonder component of awe, playing the most admirable music.

Just as their debut, Steampunk Serenade (Foxhaven, 2011) evidenced, the experimental nature of a modern jazz trio need not eschew its gracefulness. "Stanley's Package," a composition by Lederer, is a great example. It is easy to imagine this piece being covered by Sonny Rollins circa his Way Out West (Contemporary, 1957) years. It swings with a faux naiveté that camouflages the piece's sophistication. Lederer, who can holler an Albert Ayler chant or whisper like Lester Young, is well suited to Miller's Honey Ear philosophy. The trio's take on Thelonious Monk's "Evidence" begins as a marching band cover, with Miller parading her kick drum, before the trio messes with time. Indeed, fiddling with Monk's time is like working in the fourth dimension. Both Hart and Miller exhibit their wares here.

The music reaches a bit higher, too, with the guest appearance of cornetist Kirk Knuffke on three tracks. "Speak Eddie" is a twisted dish of bebop in which Lederer trades licks with Knuffke before Hart plays from his Jimmy Garrison songbook and Miller dusts off her drum kit with brushes, freezing time once again. "Lullaby" by Miller is as inscribed, the music you want to hear before dreaming. Its deliberately paced melody is wrapped in abstracted daydreams and light.