By Doug Collette
August 21, 2020
Sign in to view read count
Blues Deluxe is a regular column comprised of pithy takes on recent blues and roots-music releases of note. It spotlights titles in those genres that might otherwise go unnoticed under the cultural radar.

Less the blues in form than in feel, these twelve performances percolate with the yearning, despair, liberation and good humor (not to mention a palpable undercurrent of eroticism) at the heart of the genre). The bulk of the tunes are originals from the great Australian songwriter and musician Kelly, plus Shakespeare's "Sonnet 138" turned into a torch song, alongside Cole Porter's "Every Time We Say Goodbye." The latter, a choice of pianist Grabowsky, an esteemed composer/arranger in his own right, receives the same simplicity of accompaniment the duo bestow on the other selections (piano and vocals plus harmonica on the closer "If I Could Start The Day Again") and, in keeping with the precise choice of songs, the gentle touch of instruments is as delicate as the vocal delivery. All of which is completely bereft of sentimentality, as Kelly and Grabowsky completely inhabit these songs as a means to proffer tacit invitation to listeners to do the same. 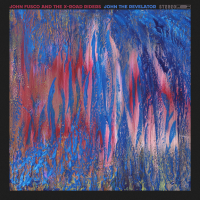 Pretension of its self-referential title aside, John Fusco's second work with the X-Road Riders band is a slight improvement over the cliche-ridden debut. A would-be renaissance man based on his accomplishments as a filmmaker, the multi-instrumentalist/vocalist/songwriter still sounds too much like that fledgling musician in the process of sorting out his influences and finding his own voice. His main role model here, at least based on disc two, would be Gregg Allman: the late great Brother also covered "Don't Mess Up A Good Thing." The heft of this double set doesn't render its shortfalls any more egregious, but the spirited and sympathetic musicianship cannot wholly camouflage material alternately pedestrian and overtly derivative. Thankfully, a nagging air of gentrified dabbling in the blues largely dissipates by dint of versatile instrumental contributions of North Mississippi Allstars' Cody Dickinson, who also co-produced and did much of the engineering in the South, as well as his well-schooled Vermont counterpart, George Walker Petit. 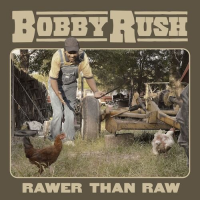 In contrast to the multiple accouterments of the last Bobby Rush album Sitting On Top of the Blues (Deep Rush Records, 2019), this one comes sans the decoration(s) of horns, electric fretboard work and harp embedded in dense arrangements. Accordingly, it should come as no surprise that the sound of the latter instrument dominates, along with bottleneck, on familiar tunes like "Dust My Broom" and "Smokestack Lightning" as well as little-known nuggets like "Hard Times" by the otherwise notable blues author Skip James. This combination of the well-known and the novel—represented by a handful of originals (credited under his given name, Emmett Ellis, Jr.) including "Down In Mississippi" and "Sometimes I Wonder— makes this record a virtual primer of the blues for dilettantes and a reminder of its most enduring qualities for established fans. More importantly, Rush's willingness to adopt different approaches to the music documents his courage and his artistic self-confidence: it sounds like it all comes naturally to him. 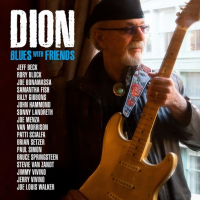 The same man who brought us "Abraham, Martin and John," after singing about "Runaround Sue" (sans the Belmonts), here joins forces with an expansive list of collaborators. No slouch of a bluesman (or chameleon) himself, Bob Dylan contributes a heartfelt liner essay, as significant for its very presence as creative forces including British guitar hero/icon Jeff Beck on "Can't Start Over Again" and The Belfast cowboy himself, Van Morrison, who teams with Joe Louis Walker for "I Got Nothin.'" To say it's a bejeweled roster of artists might be overstatement if the fourteen tracks, as overseen by Wayne Hood and DiMucci himself, didn't illuminate the elemental virtues of the genre from such a variety of angles, acoustic, electric and orchestrated, among others. At the same time, this record's a display of eclectic skills from a well-known vocalist, guitarist and composer so confident of himself he can afford to act humble and defer to his friends. 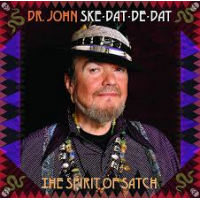 Released on limited-edition vinyl with a new cover photo of Dr. John, the updated cover image reflects the range of expression in music that deserves the renewed attention from its original 2014 release. It's hardly a surprise the New Orleans icon would find such a kindred spirit in Louis Armstrong, nor that he would be so successful in conjuring up such a celebratory atmosphere in the company of this eclectic roster of collaborators. What may be most remarkable, however, is that the man who's passing this release commemorates, Mac Rebennack, doesn't reserve the limelight for himself over the course of this baker's dozen tracks. Of course, this co-production between Dr. John and Sarah Morrow quickly seduces on its own terms by dint of the layered arrangements proffered in such pristine sound. But there's also a reciprocal spirit of generosity evinced by everyone involved from Bonnie Raitt to Shemekia Copeland to the Dirty Dozen Brass Band and the Blind Boys of Alabama.

Please Leave Your Light on

Tracks: True to You; Petrichor; When a Woman Loves a Man; Sonnet 138; Time and Tide; Young Lovers; Every Time We Say Goodbye; Please Leave Your Light on; You Can Put Your Shoes Under My Bed; Winter Coat; God's Grandeur; If I Could Start Today Again.

Tracks: Blues Comin' On; Kickin' Child; Uptown Number 7; Can't Start Over Again; My Baby Loves to Boogie; I Got Nothin'; Stumbling Blues; Bam Bang Boom; I Got the Cure; Song for Sam Cooke (Here in America); What If I Told You; Told You Once in August; Way Down (I Won't Cry No More); Hymn to Him.

Tracks: Down In Mississippi; Hard Times; Let Me In Your House; Smokestack Lightning; Shake It For Me; Sometimes I Wonder; Don't Start Me Talkin'; Let's Make Love Again; Honey Bee, Sail On; Garbage Man; Dust My Broom.

Tracks: What A Wonderful World; Mack The Knife; Tight Like This; I've Got the World On A String; Gut Bucket Blues; Sometimes I Feel Like A Motherless Child; That's My Home; Nobody Knows the Troubles I've Seen; Wrap Your Troubles in Dreams; Dippermouth Blues; Sweet Hunk of Trash; Memories of You; When You're Smiling (The Whole World Smiles At You).