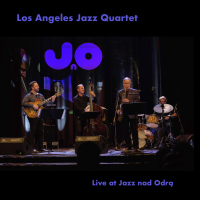 In honor of their twenty-fifth anniversary, Los Angeles Jazz Quartet took the stage in Wroclaw, Poland to perform at the Jazz at Odra Festival. This recording is documentation that they know how to celebrate in style. Five originals and two reimagined classics were powerfully and charismatically presented to an attentive and appreciative audience by bassist Darek Oleszkiewicz, drummer Jason Harnell, saxophonist Chuck Manning and guitarist Larry Koonse.

Manning came out of the gate pulsating and swinging to the Koonse penned "Blues for Albert E." His inspired in-the-moment note selections were driven by a consummate three- piece rhythm section. Koonse then playfully meandered down the infectious path with equal delight. From the beginning the quartet was tight and conversing with ease.

The hypnotic "Shadaj" quickly downshifted and showcased the quartet's innate ability to instantaneously create and maintain a mood. The brilliant Manning composition and arrangement are graced by the furious intensity of Manning and Koonse, encapsulated in the braced framework of Oleszkiewicz and Harnell. This heady piece of work also features a masterpiece of musicality from Oleszkiewicz sandwiched between Manning's nuanced riffs.

Sliding into some Miles Davis is always a good call. Especially when Kenny Burrell and Philly Joe Jones light up the stage. Not really, of course, but Koonse and Harnell lit it up for Coltrane, er, Manning to chase after dynamics of his own. It was time for the Paul Chambers bass solo, but that was perhaps too obvious; Oleszkiewicz instead dipped into his bag of tricks and accessed the leanings of Charlie Haden. Oleszkiewicz's sequence of virtuosity left a refined audience in a daze which led to their largest and loudest reaction of the evening. Harnell then kicked into swing and the unit was at one again with miles to go.

As a rule, imagery in jazz is more apparent on a studio album than a live performance. Proving that rules are made to be broken, the quartet embarks on a romantic theme which may conjure a couple dancing, embracing both themselves and the moonlight. The sensitive Oleszkiewicz composition caresses the ambiance of the "Embarcadero." Exquisitely emotive playing by all is highlighted by the lines of Oleszkiewicz, that tenderly capture the moment.

Harnell's compositional entry is a broadly refined drum solo fraught with movement, tempered intensity, and a meticulous skill set. "Song for Sara" is softly driven with lightly finessed cymbals, patience, and a deft command of his kit. Oleszkiewicz engages, still it is Harnell's delicate improvisations which are felt. Koonse comps, still it is Harnell who propels the piece. Manning jumps in with a ballsy sax refrain which becomes a superb drum and sax duet with an enriched dialogue.

The show closes with a blistering go round on "Get Around." The Oleszkiewicz-written piece is driven hard by the rhythm section from start to finish. Clearly written with his personnel in mind, Manning plays like he was shot from a cannon. He continues to soar and is met in mid air by an empowered Koonse, tipping the scales with equal weight. Showcasing his finesse throughout the evening, Harnell now eschews and flies with power relentlessly. A four-way conversation that had been in place from the outset was now being spoken with a most eloquent and quick-witted vocabulary.

As they say, the crowd went nuts! And for good reason.

Blues for Albert E.; Shadaj; All Blues; Embarcadero; Think of One; Song for Sara; Getting Around.