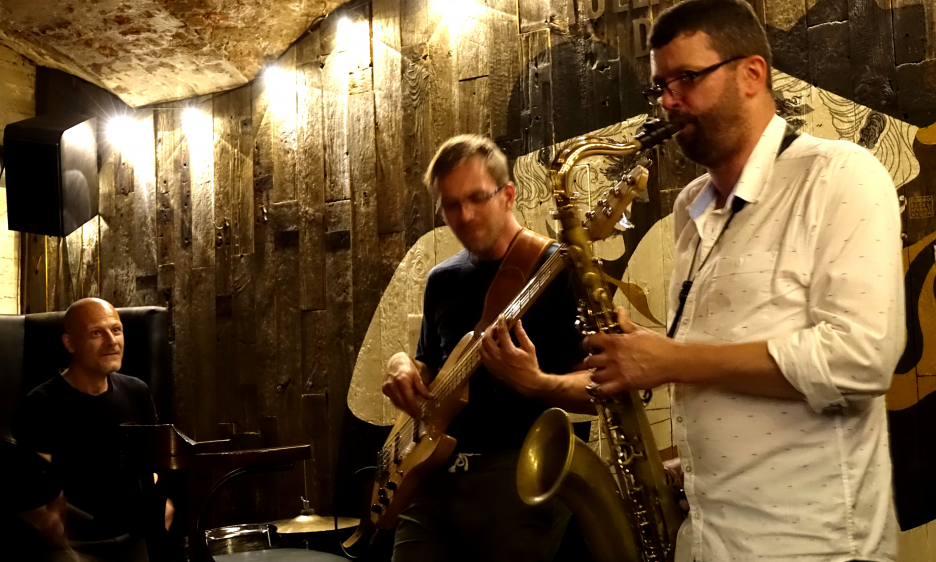 Gdansk (once Danzig) has been affiliated with Germany and Russia but mostly with Poland through 1,000 years of history. Forty years ago, a young electrician in the Lenin Shipbuilding Yard in Gdansk started an independent union Solidarnosc—Solidarity, which eventually led to the downfall of Soviet communism in Poland. Lech Walesa went on to become President, won many accolades and was awarded the Nobel Peace Prize.

The architecture of Gdansk is Dutch Mannerism, tall narrow buildings from the late 16th century with highly decorated facades and steeply pitched roofs, meticulously rebuilt after World War II. In a cellar beneath one of these decorated buildings in Dluga, the main street in Old Town, is Bruderschaft, a jazz club owned by Danusz Chanasc for the last eight years. Manager Agata Zagorunuz explained: "Bruderschaft refers to the cross-linked arms way of drinking steins of beer." The setting is a classic brick vaulted cellar with bare-board wooden floors and vaguely disreputable furniture to complete the ambience and seat the well-spaced audience of around thirty gathered for the Tomasz Grzegorski Trio. Masks are back in fashion in Poland these days, but not for musicians.

The trio of Tomasz Grzegorski on tenor saxophone, Tomasz Sowinski on drums and Konrad Zolnierek on electric bass guitar presented a clean sound in a small space. Tenor saxophone carried the tune for Duke Ellington's " Take the A-Train," drum sticks dropped to brushes and hi-hat to leave space for a seriously good bass solo, then tenor saxophone came back to open a conversation with drums, to and fro in four measures each. They moved on to "Les Feuilles Morts" (Autumn Leaves) which the band hit hard and fast in an upbeat version, including a good improvised saxophone section repeating a couple of riffs which had clearly pleased Grzegorski the first time around. A sharp bass solo followed, with Zolnierek using a tall chair back as a music stand. A well placed low trill from the tenor saxophone took them back to the melody and out.

To break the rhythm, the trio gave a slow "What a Diff'rence a Day Makes," and then into a lively "There Will Never Be Another You" from the movie Iceland (20th Century-Fox, 1942) with tenor saxophone stating the melody then dropping out to leave space for a bass solo. As the tenor saxophone returned, the bass picked up a walking line in support. Grzegorski blew a long, low note to signal their return to the theme, and the way out of the first set.

After the break, more musicians arrived. On guitar Michal Zienkowski and on alto saxophone Michal Sasin with Filip Zoltowski on trumpet. They started "Caravan" with just the kick drum and hands beating the snare, joined by a bass line. The insistent theme carried the musicians along, trumpet giving a good solo followed by fluid alto saxophone bouncing on and off the beat. Drums picked up the pace using mallets and both tenor and alto saxophones played in unison.

In the dark cellar, guitarist Zienkowski put on his sunglasses to lead a blues, which tempted the alto saxophone to split some screaming high notes while the trumpet took a softer, more melodic line. Tenor saxophone returned to join a bluesy guitar section and re-established the blues mood.

They ended on Joe Henderson's "Recorda Me" (Remember Me) with short solos from each of the musicians. They each came and went to a side room to give space for the players. The movement and jam session excitement kept the energy high.

What began as a solid trio performance turned into a roaring jam session, which featured six good musicians all eager to play and leave their mark. A good night of jam session jazz in Gdansk, Poland.