he haunting quality of Nehemiah “Skip” James’s music earned him a reputation as one of the great early Mississippi bluesmen. James (1902-1969) grew up at the Woodbine Plantation and as a youth learned to play both guitar and piano. At his 1931 session for Paramount he recorded eighteen songs, including the dark-themed “Devil Got My Woman” and “Hard Time Killing Floor Blues.” He later became a minister, but returned to performing blues during the 1960s “blues revival.” The music of Skip James and fellow Bentonia guitarists such as Henry Stuckey (1897-1966) and Jack Owens (1904-1997) is often characterized as a genre unto itself. The distinctive approach is notable for its ethereal sounds, open minor guitar tunings, gloomy themes, falsetto vocals, and songs that bemoan the work of the devil. Stuckey learned one of the tunings from Caribbean soldiers while serving in France during World War I, and said that he taught it to James, who went on to become the most famous of Bentonia's musicians. James was born on June 9, 1902, on the Woodbine Plantation where his mother Phyllis worked as a cook; his father, Edward, a guitarist, left the family when James was around five. Inspired by Stuckey, James began playing guitar as a child, and later learned to play organ. In his teens James began working on construction and logging projects across the mid-South, and sharpened his piano skills playing at work camp “barrelhouses.” In 1924 James returned to Bentonia, where he earned his living as a sharecropper, gambler and bootlegger, in addition to performing locally with Stuckey. James traveled to Grafton, Wisconsin, for his historic 1931 session for Paramount Records, which included thirteen songs on guitar and five on piano. “Hard Time Killing Floor Blues” alluded to the Great Depression, while the gun-themed “22-20 Blues” provided the model for Robert Johnson's “32-20 Blues,” and the haunting “Devil Got My Woman” was the likely inspiration for Johnson's “Hell Hound on My Trail.” James’s records sold poorly, and later in 1931 he moved to Dallas, where he served as a minister and led a gospel group. He later stayed in Birmingham, Alabama, and in Hattiesburg and Meridian, Mississippi, occasionally returning to Bentonia. When he applied for a Social Security card in 1937, he was employed locally by the Cage Brothers (probably the Cage family who had a farm north of town). He returned in 1948 and sometimes played for locals at the newly opened Blue Front Cafe, although he did not earn his living as a musician.

He later lived in Memphis and Tunica County, where he was located in 1964 by blues enthusiasts who persuaded him to begin performing again. James relocated to Washington, D. C., and then to Philadelphia to play folk and blues festivals and clubs. He recorded several albums and gained new renown from the rock group Cream’s 1966 cover of his song “I'm So Glad,” but the somber quality of much of his music and his insistence on artistic integrity over entertainment value limited his popular appeal. James died in Philadelphia on October 3, 1969. He was inducted into the Blues Hall of Fame in 1992. 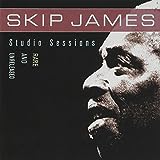 Devil Got My Woman

All About Jazz musician pages are maintained by musicians, publicists and trusted members like you. Interested? Tell us why you would like to improve the Skip James musician page.