Son House, the legendary Delta blues singer and guitarist, was an original voice coming out of Depression era Mississippi. He embodied the isolation, poverty and alienation of the Delta, which translated into his visceral and gripping expressions, forming the bedrock of the blues idiom. His influence looms large in the annals of American popular music.

House was born on the Mississippi River Delta, on a plantation between the towns of Lyon and Clarksdale. The Delta, formed by the Big Muddy's deposits of silt, is a flat belt of fertile land that has been used for farming since the eighteenth century. Before the Civil War and the abolition of slavery, in 1865, Delta plantation owners had been major purchasers of human labor. After they received their freedom, the displaced former slaves maintained their musical and storytelling traditions, spirituality, endurance, and humor—all of which found a voice through the blues.

Still, the music that emerged from these common beginnings was not embraced by all blacks; the Delta blues belonged to the poorest and most illiterate. It grew to sophistication on street corners and in the rowdy and often dangerous drinking places called juke joints. The performers were usually drifters who could find work anywhere during harvest time. But the most popular became local stars—and often infamous. In Deep Blues, blues scholar Robert Palmer explained: "Blues was so disreputable that even its staunchest devotees frequently found it prudent to disown it. The church and the blues were not supposed to mix. This was an ethical dilemma that haunted Son House all of his life.

By the age of 15 House was giving sermons. By 20, he was the pastor of a Baptist church near Lyon. And though he was passionate about religion, House never committed to a career in the church. He rambled from job to job, picking cotton, gathering tree moss, always looking for the least strain. Though his father, Eddie House, Sr., and his uncles had their own horn band, Son House never viewed music as a professional option.

By 1926, after a romance had taken him to Louisiana, House had returned to Lyon and was considering going back to the church. Around that time, while doing some rambling and drinking, House had seen a local bluesman named Willie Wilson play bottleneck guitar. He was dazzled. "This boy," House remembered in Guitar Player, "had a thing on his finger like a small medicine bottle, and he was zinging it, you know." He recalled, "'Sounds good!' I said. 'Jesus, I like that! I believe I want to play one of them things.'" With a dollar and a half House went out and bought himself a battered guitar. Wilson taught him how to tune by ear, another player, James McCoy, gave him lessons, and the rest he picked up on his own.

But House's distinctive Delta blues style was not simply a product of McCoy's influence, or the recordings of blues great Charley Patton, or even the sliding guitar style of another model, Rubin Lacy; the church, in fact, had a hand in it, too. In Deep Blues, Palmer noted, "[House's] instrument became a congregation, responding to his gravelly exhortation with clipped, percussive bass rhythms and the ecstatic whine of the slider in the treble.... It was stark, gripping, kinetic music that demanded to be danced to and would have left few listeners unmoved." Indeed, Son House was preaching the blues.

In those days the Delta was Mississippi's wild side; hard times, heavy drinking, and a gun in the possession of almost every man was a lethal combination. In 1928, House was sent to a state penal farm for shooting and killing a man at a drunken house party near Clarksdale. House had pleaded self-defense. After serving two years, he was released and ordered not to return to Clarksdale. He headed north.

In Lula, Mississippi, he met his hero, Charley Patton, and the two became as close as brothers. House, Patton, and a local bluesman named Willie Brown teamed up for gigs and enjoyed some small-time success. In 1930, representatives of Paramount Records ventured to Lula to invite Patton to Wisconsin for a recording session. Patton brought along Son House, Willie Brown, and blues singer and piano player Louise Johnson. The resultant recordings have become classics, and Son House's "My Black Mama" and "Preachin' the Blues" are considered masterpieces of Delta blues singing.

Patton died in 1933. House married, earned a meager living driving a tractor, and continued playing with Brown. Along the way, House taught his classic "My Black Mama" riff to future blues titans Robert Johnson and Muddy Waters. In 1942, House recorded "Walking Blues," "Special Rider Blues," "The Pony Blues," and "The Jinx Blues" for the Library of Congress. Then, in 1943, he left the Delta for good.

Unlike Muddy Waters, who made his way to Chicago in search of fame and fortune, House's chief motivation in leaving the Delta was to escape the drudgery of life in Mississippi. Alone again, he took the train to Rochester, New York, and landed himself a job with the train line. When Willie Brown died in 1952, House told Guitar Player, "I said, 'Well, sir, all my boys are gone.' That was when I stopped playing. I don't even know what I did with the guitar." House abandoned the blues and joined the Amen Baptist Church.

After he was located by a pair of blues devotees and coaxed out of retirement in 1964, House signed with Columbia Records and resurrected his signature tunes. He performed at blues festivals and colleges, and concerts took him all the way to Europe. Through all the acclaim, he remained a soft-spoken, modest man who depended on the bottle to calm his nerves. By 1976, deteriorating health forced his retirement. Son House moved to Detroit to be with family and died in his sleep on October, 19, 1988. With his passing went the last of the great original Mississippi Delta blues singers.

As for his guitars and technique, Son played various National single cones ( Duolians and Style "O"s), playing slide with a piece of copper tube(?) on his third finger in "Spanish"(Open G - DGDGBD) tuning. By using his third finger,Son was able to damp behind the slide and use his pinky for fretting. The copper tube adds a gritty sound, which works great with a Duolian, Steel bodied "O" (or a new Delphi).

Son House Bio, Preachin the Blues: The Life and Music of Son House

The Richard Sussman Trio The Hudson House of Nyack Thursday nights in... 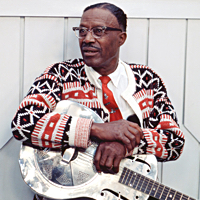 All About Jazz musician pages are maintained by musicians, publicists and trusted members like you. Interested? Tell us why you would like to improve the Son House musician page.