By Doug Collette
May 6, 2022
Sign in to view read count
Perfectly complementary in their earthy simplicity, the archive titles by Son House and Reverend Gary Davis offer an antidote to the antiseptic ephemera that is contemporary pop. None other than Dan Auerbach of the Black Keys curated the former's Forever On My Mind (and released it on his own Easy Eye Sound label) while the latter's Let Us Get Together, comprised of two concert recordings via the Sunset Blvd. Records, provides charitable support to the blind (like the artist himself) through sales of the double set. The fundamental wonder of both titles, however, is that each in its own way can supply as many revelations for purists as dilettantes, not just in rediscovering how contemporary acts of the era appropriated stylistic ideas, but how perfectly poised were both men in performing for audiences larger and more diverse than any for whom they'd played prior to these dates. The presence and poise of their respective personalities compares favorably to the sonics of the recordings: listeners will feel as enthralled as if sitting on stage with these genuine legends of blues music, all the better to appreciate the wondrous nuance(s) contained within sounds conjured by a single man and his guitar. 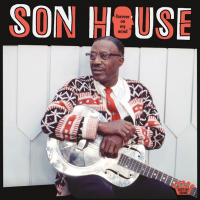 It's not to disparage the Son House performance to say it doesn't contain the storytelling and overall sense of spontaneity of Davis's; according to former manager (and executive producer of this set) Dick Waterman, the man had simply not honed his live presentation to that extent. Instead, this near forty five minutes is a primer in the blues, an exemplary depiction of just how subtle such acoustic music is when parlayed by a musician who has mastered its nuances. The scholarly essays that accompany both these live recordings—in this case, an excerpt from Prof. Daniel Beaumont's book—radiate a passion comparable to that in the music. And while the story of this Mississippi native's ascension to deserved acclamation is as convoluted as the circuitous route by which these two shows found their way to wide release—in this case, sourced from the aforementioned Waterman's treasure trove of tapes— the precision and power of this man's playing and singing during a November 1964 show at Wabash College in Indiana more than justifies the belated recognition. 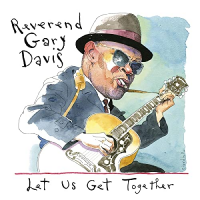 Reverend Gary Davis
Let Us Get Together
Sunset Blvd. Records
2022

Reverend Gary Davis's playing on guitar and harmonica during these two shows renders moot the slight duplication of material. As Bill Dahl notes in his own erudite essay, Davis's poise and good humor on stage elevated his musicianship as a means to maximize his potential opportunities to play for a much wider expanse of audiences; it was a propitious circumstance he shared with his peer and one clearly hitting home with those in attendance, judging by the rapt (and deservedly adulatory) response at repeated junctures. Instrumentals like "Cincinnati Flow Rag" earmark over seventy minutes on each disc, their housing in a double-fold package with vivid cover graphics a reflection of the healthy playing time of each set; a number of pieces appearing within will be familiar to aficionados of modern rock and blues as "Samson & Delilah" and "Death Don't Have No Mercy" were both covered by the Grateful Dead, while "Candy Man" became a staple of the Hot Tuna repertoire early on in the career of that offshoot band of Jefferson Airplane.

Forever On My Mind

Let Us Get Together